Donald Trump, in a meeting with the nation’s governors in late February, admitted that health care policy is complex (“Nobody knew that healthcare could be so complicated”). All the same, he assured the governors that the replacement for Obamacare would be much better: “We have come up with a solution that’s really, really, I think, very good.”

Paul Ryan, defending the proposed bill in advance of the Congressional Budget’s Office analysis showing that the legislation will drastically decrease coverage, stated: “Our goal is not to show a pretty piece of paper that says we’re mandating great things for Americans. Our goal is to get a vibrant health-care system that’s patient-centered, that brings down costs, that increases choices, that has a marketplace so that we lower the costs, and therefore, increase the access to affordable care. That’s our goal, and it’s not to win some coverage beauty contest.”

So much for Republican rhetoric.

The proposed Republican bill, the American Health Care Act (now referred to as TrumpCare), which describes itself as laying “the groundwork for a 21st century health care system,” is clearly not intended to provide more Americans with health insurance coverage. Instead, TrumpCare, if enacted, will reverse the trend of widening health insurance coverage set in place by Obamacare. By next year the Congressional Budget Office’s forecasts that “14 million more people would be uninsured under the legislation than under current law,” and, “in 2026, an estimated 52 million people would be uninsured, compared with 28 million who would lack insurance that year under current law.”

By increasing health insurance coverage broadly across all population groups and levying taxes on wealthier Americans to subsidize the insurance for poorer Americans, Obamacare also served “as an instrument of social justice,” writes Angela Bonavoglia in The Nation, that “start[ed] to mitigate America’s yawning class divide.” Trumpcare, will undo these achievements.

But Obamacare only went so far. Class-based inequities, although reduced, remain striking.

Since 2011, as shown in figure 1 below, the rates of uninsured people have declined at all multiples of the poverty level. Nevertheless, disparities in uninsured rates remain large. In 2015, for people living in deep poverty (less than 0.99 of the poverty-income rate) or near-poverty (between 1.00 and 1.99 of the rate)5, the uninsured rates were still very high, compared to the very low rates at higher levels of income (greater than 4.00).

Overall, the number of people living in poverty without health insurance coverage decreased by almost 5 million between 2010 and 2015. Among the non-elderly adult population (between the ages of 18 and 64) living in poverty in 2010, more than 11 million were without coverage; by 2015 this number had decreased to about 7 million. In addition, about 12.5 million living in near poverty (twice the poverty level) were without health insurance in 2010; this number had fallen to 7.5 million in 2015. 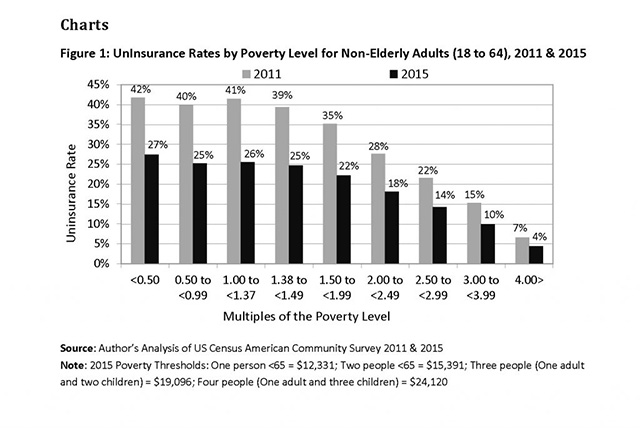 People of low income, many of whom were living in poverty or near poverty, are still much more likely to lack health insurance coverage. In 2015, uninsurance rates were still disproportionately higher among non-elderly adults living in poverty or near-poverty. For all multiples of the poverty rate up to two and one-half times the poverty rate, the share of the uninsured non-elderly was greater than their share in the total population in 2015, as depicted in figure 2: 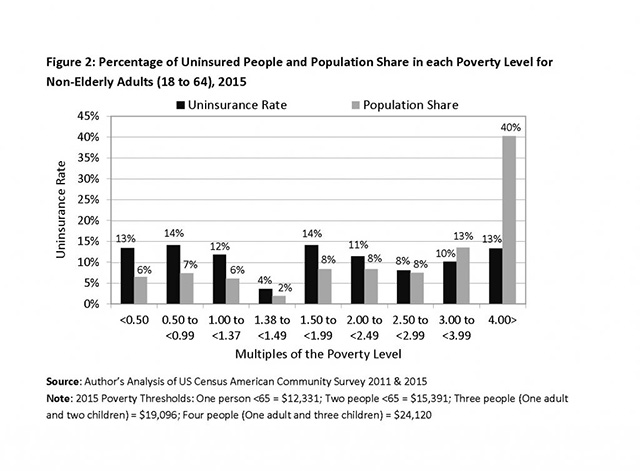 Direct-purchase health insurance increased at all income levels under Obamacare. The availability of federal subsidies allowed many eligible non-elderly adults to purchase policies via an exchange. Non-elderly adults with incomes between 100 percent and 250 percent of the poverty level also benefited from additional cost-sharing subsidies.

A Center for Economic and Policy Research report notes that the surge in voluntary part-time work following the ACA is a case where “people have voted with their feet, indicating they feel sufficiently confident in the insurance provided through the ACA to give up employer-provided health care insurance.” 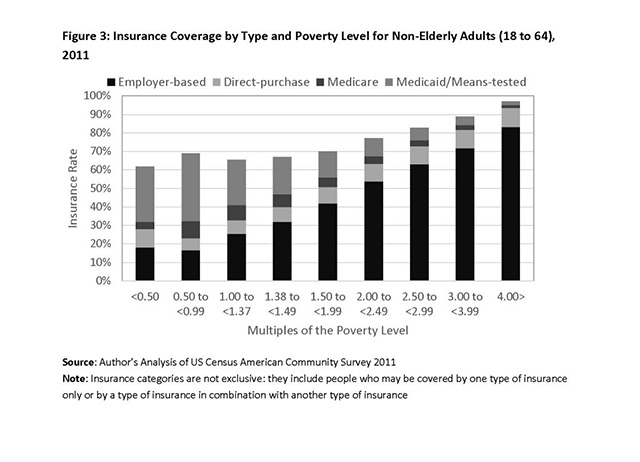 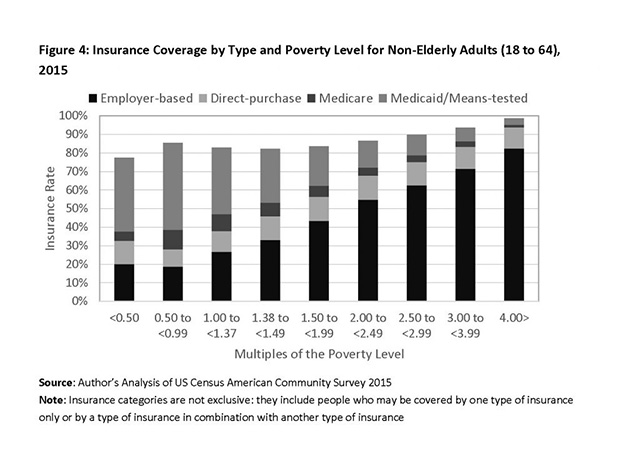 All told, far too many people, especially people living in poverty and near poverty, still do not have health insurance coverage. TrumpCare will only make it worse. Ultimately, only a universal care system will ensure that all Americans are beneficiaries of their fundamental human right to receive the health services they need without suffering financial hardship.