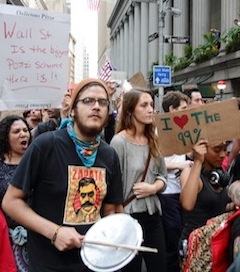 I recently came across a pithy, anti-Occupy Wall Street column in Entrepreneur Magazine that encouraged protesters to go home and create start-up ventures instead of standing up for social and economic justice. I say we express our dissent and commitment to community wealth-building by occupying entrepreneurship.

The column was just under 400 words, but I can summarize it for you: Stop complaining and start a business. Though the conservative argument behind it was neither new nor particularly well-founded, it was aggressively inane and patently misguided all the same.

The writer paid homage to the rhetoric of the Land of Opportunity, but gave no deference to the massive opportunity gap that in many ways accounts for the huge disparities of wealth, income and platforms of meaningful access between over-privileged and average Americans that have catalyzed the Occupy movement.

It’s true that it’s easier to start a business than to help build a movement. I dare say, though, the latter is always more transformative. That said, the writer leaves out a few important things, all of which gravitate around one matter: facts.

Telling folks to stop protesting and start a business is like encouraging people to run for public office, but discouraging them from registering to vote. The protest movement afoot in cities across our nation is laying the groundwork for democratizing — among many other things — entrepreneurial opportunity by starkly illustrating how grave social inequities hobble not just protesters in tents, but families on farms, couples in McMansions, and kids in college.

Protest and dissent are inalienable rights. It makes us better citizens and stewards of our society and makes our nation better as a result when we do so non-violently, strategically, and often.

Starting a business because we’re jobless and broke? Not so much.

What the writer doesn't understand is that we actually have too many would-be entrepreneurs who have started businesses all willy-nilly that should never have been started in the first place. They have maxed out their credit cards, borrowed from struggling friends or relatives, taken out a second mortgage on their now foreclosed home in search of the American Dream. It’s a dream that the late comedian-sage George Carlin used to say could only be believed if you were asleep.

And just as Tahrir Square influenced the protests on Wall Street and beyond, we need to do for entrepreneurship and commerce exactly what the Occupy movement is doing for civil society: Reminding ourselves that what is good for communities of struggle is good for America itself, and that obscene gaps between the ultra-rich and the rest of us are an affront to he common good. The same truths apply to community wealth-building through commerce.

The businesses we need to help restore our most distressed communities are not more of the same — be they small or big, high-tech or low-tech, corporate or family-owned; they are enterprises — both for-profit and non-profit — that bolster the commons. We need a much higher proportion of commonwealth enterprises to traditional businesses. For such commonwealth entrepreneurship benefits not just the investors, employees and consumers of such enterprises, but society at-large because they address the very social ills the excesses of Wall Street exacerbate.

We need to Occupy Wall Street and elsewhere. We also need to occupy entrepreneurship — the intersection of innovation and economic opportunity.

Occupying entrepreneurship means redefining the words, assumptions, behaviors, and policies associated with starting and growing businesses. Occupying entrepreneurship demands we transform this intersection into a vibrant crossroads where democracy, inventiveness, collaboration, and inclusion culminate into the type of enterprises that every community needs and deserves.

The Occupy movement represents grassroots, democratic action towards shared prosperity. So, too, must 21st century entrepreneurship.

Chris Rabb is a consultant, writer, and public speaker focusing on the intersection of social identity, media, civic engagement and entrepreneurship. His forthcoming book is called Invisible Capital: How Unseen Forces Shape Entrepreneurial Opportunity, to be released in October 2010 by Berrett-Koehler Publishers.