Pro-king royalists violently quelled a February 20 movement protest in Rabat's Old City, on the eve of Morocco's much trumpeted referendum on the king's proposed changes to the Constitution.

“We are here to express our concerns about the constitution, concerns that it does not do anything good for Moroccans,” said Mohammed, one February 20 movement protester. “They are pushing people to say yes and when we say we won't vote, they come out and stop us.”

The past weeks have seen a massive government campaign for the Constitution, with countrywide concerts, rallies, TV shows and newspapers urging Moroccans to vote yes. Meanwhile, critical voices have been conspicuously absent from public discourse and pro-Constitution royalists have turned increasingly violent toward protesters. February 20 movement protesters, who have been shut out of national media, are calling for a boycott of reforms they denounce as superficial. These protesters claim that royalists have been paid by the government to turn out en masse for public demonstrations, in the lead up to the vote. 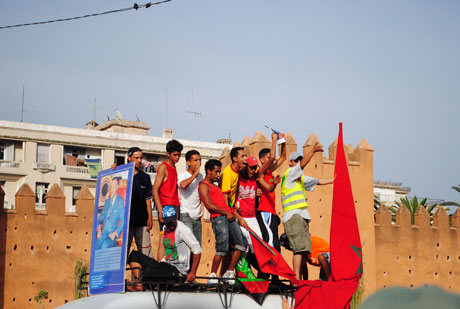 An hour before the February 20 movement protest was set to begin, busloads of young men were brought to the demonstration's meeting point, where they were handed matching red T-shirts declaring, “yes to the constitution.” Zakaria, a student at Muhammed V University in Rabat, explained, “These shirts are free. They were provided to us by a man from the government.” He insisted, “We are here because we love the king.” 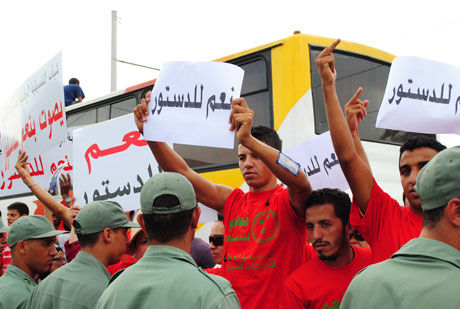 As several hundred February 20 movement protesters assembled at a nearby street corner, they were quickly surrounded by the swelling crowds of over 1,000 royalists, who were waving flags and holding stock signs demanding “vote yes to the constitution.” Protesters held up peace signs and chanted, “The people want the fall of corruption,” and, “Don't go vote tomorrow.” 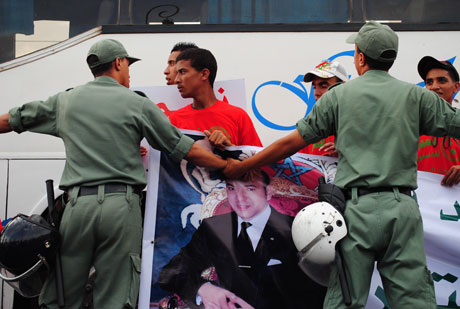 While police initially prevented the crowd of royalists from attacking the protesters, they allowed them to come close, shutting down lanes of traffic so that buses and trucks hoisting royalists waving flags and blaring sound systems could surround the February 20 movement demonstration. Several royalists wove through the crowd of protesters hoisting a mock coffin with “February 20th Movement” written on the side. 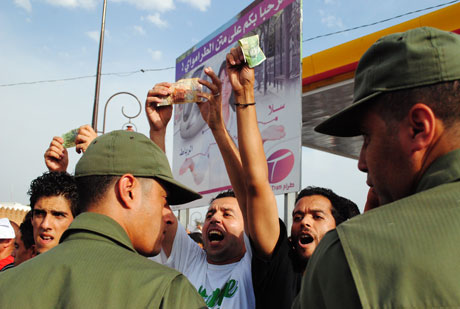 Protesters urged each other not to react, and at one point, turned their backs to the crowd of royalists. Meanwhile, protesters performed street theater criticizing the new Constitution. “The constitution is not democratic. It does not fulfill our needs,” said one protester, who declined to give his name. “The government is trying to manipulate us.” 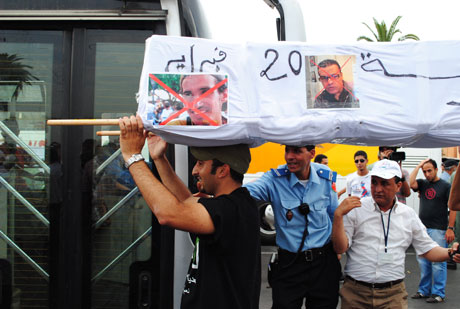 When police opened up a passageway for February 20 movement protesters to leave the area where they were surrounded, royalists came running and clashes broke out in several places a main intersection. As protesters attempted to regroup, they were repeatedly attacked and one protester, who was struck several times by a royalist, fell into the street, with what appeared to be serious injury. She was later taken away in an ambulance. 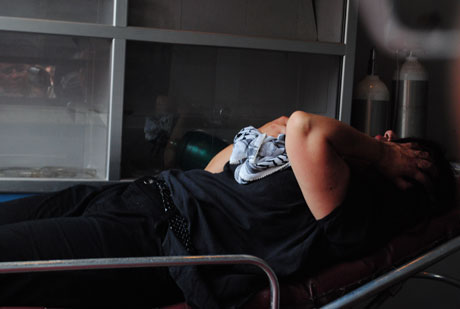 The February 20 movement, launched in February of this year, is a broad coalition calling for democracy and an end to poverty and government corruption. This movement's rise coincided with so-called Arab Spring protests that have swept the Middle East and North Africa. The constitutional changes, going to vote today, were a concession by the king to the mass protest movement throughout the country. Yet, critics charge that the amendments are largely superficial, leaving real power consolidated in the hands of the king. 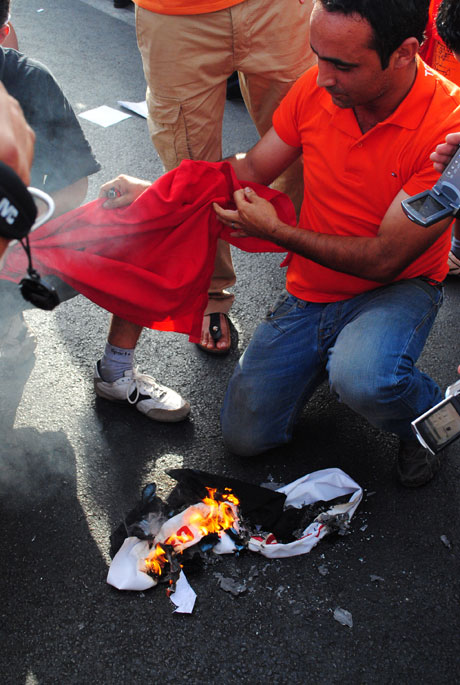 The February 20 movement has faced increasing violence from police and protesters in the lead-up to the July 1 vote on the new Constitution. On Sunday, about 2,000 protesters in Rabat were surrounded by a crowd of royalist demonstrators who attempted to use similar tactics to stop the protest. Last month, protester Kamel Amari was killed by police hands, prompting massive demonstrations against police violence throughout the country.

Rachid Nini, the editor of one of Morocco's leading newspapers, Al Massa, was recently handed a one-year prison sentence for publishing articles critical of Moroccan security authorities and government corruption. The February 20 movement reports that several journalists have been fired from their jobs this week for criticizing the government.

“All we get is government propaganda,” said one bystander who said he was not a part of the February 20 movement. “If you say no, the government will repress you.