Rebecca Solnit’s voice has seldom been more timely or necessary. In her new collection of essays, The Mother of All Questions, Solnit addresses issues of gender, race, sexual orientation, class, age, religion and more with her characteristic wit, insight and sharp analytical approach. Order this book today by making a donation to Truthout!

In the first essay of her incisive book that addresses — but is not limited to — the historical suppression of women, Rebecca Solnit states, “My subject in this book is that subspecies of silence and silencing specific to women.” Solnit distinguishes between a woman being quiet, which is a voluntary act, and a woman being silent, which is accomplished through cultural and individual male coercion. It is not just a verbal silence that she is discussing, but a patriarchal suppression of equality, power and welcome contribution to society. This is a theme that is threaded throughout her book, The Mother of All Questions.

Solnit is a master essayist who flawlessly segues from personal experiences and thoughts to cultural observations and universal truths. In this respect, the title of her book is an example of her acumen. Her introduction sets up the premise of the book by explaining Solnit’s personal initial bafflement at being asked on more than one occasion — in interviews and in conversations — why she doesn’t have any children. After being blindsided by the question several times, she realizes that the query is a way of silencing women, of imposing a male expectation on a woman that females are only fulfilling the social role expected of them if they have children. In short, it is a question that by its very assumption silences women by imposing on them a worldview that opinions and power are for men, and children are for women. 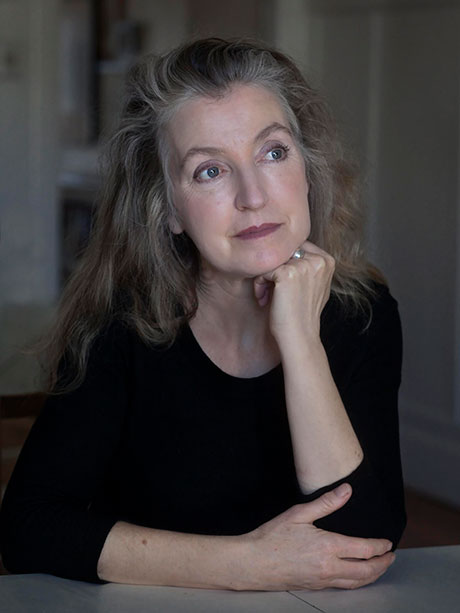 Rebecca Solnit. (Photo: Adrian Mendoza)Bearing children is the obligation of women in a patriarchal-structured society, and not bearing them is grounds for shaming. Solnit also observes in her second chapter that men become hampered by the silencing of women because they shun the full pallet of thoughts and emotions that are considered “feminine.” She writes, “Masculinity is a great renunciation.” Indeed, “emotions, expressiveness, receptiveness, a whole array of possibilities get renounced by successful boys and men in everyday life.” Solnit admiringly quotes bell hooks, who wrote, “patriarchy demands of all males that they engage in acts of psychic self-mutilation, that they kill off the emotional parts of themselves.”

Solnit connects a wide range of seemingly disparate subjects. She deftly debunks theories about women playing a passive role in the hunter stage of our ancestors one moment and discusses the nuances of gender roles in the ’50s Hollywood epic film Giant the next. As another example, in her essay “The Case of the Missing Perpetrator,” Solnit squarely demolishes the conventional wisdom, as conveyed by such sources as the Center for Disease Control (CDC), that young women should drink less in order to avoid rape and pregnancy. She ridicules the CDC’s “widely mocked guidelines to drinking,” which put the onus on women not men, writing:

They are like a detective novel run backward — if you read them with credulity, you’d become muddled about what a woman is and how violence and pregnancy happen and who is involved in those things. If you read more carefully, you might learn why the passive tense is so often a cover-up and that the missing subject in a circumlocutionary sentence is often the guilty party.

Who is the missing subject? Men and young men who are most often the perpetrators of rape. It is their drinking and their potential violent sexual behavior that the CDC should be issuing guidelines about.

A hallmark of Solnit’s writing over the years has been that she never lapses into pessimism. She asserts that the world is not fixed, that it is intricately interconnected — and that the oppressed can change the story, but must break through the silence and assert a transforming voice. She doesn’t underestimate the challenge, but she fervently believes in the possibility of change and the power of individuals to seize upon opportunity, however small:

The great feminist experiment of remaking the world by remaking our ideas of gender and challenging who has the right to break the silence has been wildly successful and remains extremely incomplete. Undoing the social frameworks of millennia is not the work of a generation or a few decades but a process of creation and destruction that is epic in scope and often embattled in execution.

Yes, the struggle will be arduous, but that is no excuse for evading it, Solnit argues: “Silence and shame are contagious; so are courage and speech.”

More feminist essays from Rebecca Solnit, the acclaimed author of Men Explain Things to Me.

In reading The Mother of All Questions, one should be reminded that it is a series of essays. They are tied together by the insights of Solnit’s incisive thinking and credibility as a guide. She covers ground that ranges from the wry to the grim, consistently urging resistance and not submission:

The task of calling things by their true names, of telling the truth to the best of our abilities, of knowing how we got here, of listening particularly to those who have been silenced in the past, of seeing how the myriad stories fit together and break apart, of using any privilege we may have been handed to undo privilege…. It’s how we make the world.

She discusses diverse topics — including an Esquire Magazine list of top 100 books for men to read — but frequently returns to the blunt impact of the patriarchal oppression of women and gender nonconforming individuals.

For women to speak out is to assert a voice that has too often been subjugated. This declaration of voice breaks the scourge of patriarchal-imposed silence.