Ambrose Evans-Pritchard, the international business editor at The Telegraph, recently wrote that Europe’s slide toward deflation amounts to a “betrayal” of Southern Europe. This sounds over the top, but it is the simple truth. So let me elaborate with a picture I find illuminating.

The chart here shows core inflation (which excludes energy, food, alcohol and tobacco) in Germany, Spain and the euro area as a whole.

As you can see, there have been two distinct eras for the euro system. 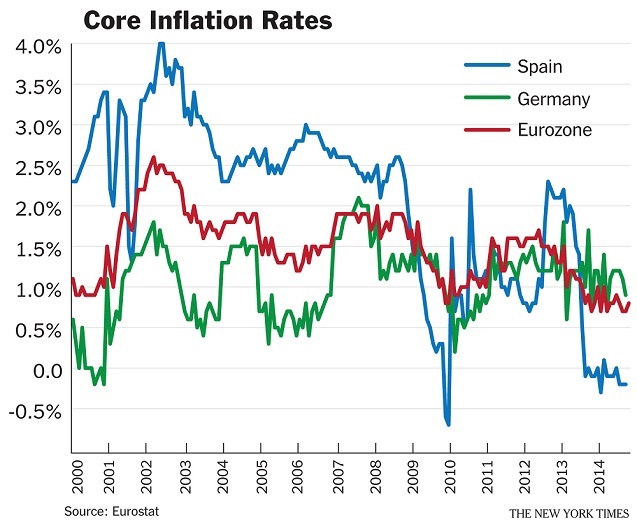 In the first era, which lasted until the financial crisis, capital flooded into Southern Europe. In retrospect, this was a bad thing, but few people in positions of authority were complaining at the time. The result was a boom in the south, and also somewhat elevated inflation.

Again, however, this was regarded as perfectly normal and good. After all, you don’t expect everyone in a currency union to have the same inflation rate. Overall inflation was fine, and rising prices in Southern Europe helped Germany become super-competitive and emerge from the economic doldrums in which it found itself at the end of the 1990s without needing actual deflation.

Then the capital flows stopped, and it became necessary for Southern Europe to reverse the rise in relative costs and prices that had taken place during the previous era. Both basic macroeconomics and the agreed-on rules of the game for the euro said that this adjustment should be symmetric with what came before — that overall inflation in the eurozone should remain at target (or higher, according to the economics, but leave that aside), with Germany running significantly higher inflation so that low inflation in the south could deliver the needed “internal devaluation.”

In fact, however, there was no rise in German inflation, and at this point it amounts to a fall. Overall euro inflation is far below target, and Southern Europe has been forced into deflation, which is very costly and worsens the region’s debt burden.

Then you have the Germans saying that they dealt with their problems, so why can’t Southern Europe do the same? Why, because Southern Europe played by the rules, but in its time of need the rules were changed, hugely to its disadvantage.

You might ask: What would have been needed to avoid this situation? The European Central Bank should have aggressively expanded as soon as it became clear that inflation was sliding. There should have been a determined effort to offset fiscal austerity in Southern Europe with expansion in the north. Instead, inflation and deficit obsession were allowed to rule for years, and now the situation is very close to irretrievable.

Donate Now
Share
© 2017 The New York Times Company
Truthout has licensed this content. It may not be reproduced by any other source and is not covered by our Creative Commons license.
Paul Krugman joined The New York Times in 1999 as a columnist on the Op-Ed p
Paul Krugman
Truthout
Share
Politics & Elections