Chanting “the Gulf is not for sale” and “you can’t wash us away,” dozens of protesters crashed a meeting on Wednesday at the Superdome in New Orleans, where the Obama administration was finalizing an offshore drilling auction that made nearly 45 million acres of the Gulf of Mexico available to oil and gas development.

US Interior Department officials announced a total of $176 million in bids from 30 oil and gas companies to an audience of industry representatives, but it was difficult to hear them above the noise created by the protesters inside the stadium, who took over the stage and podium at one point. Other protesters gathered outside.

The Bureau of Ocean Energy Management, one of the government’s two offshore drilling agencies, has auctioned off large chunks of the Gulf of Mexico eight times since 2012, but Wednesday was the first time an auction was met by a large protest, drawing demonstrators from across the Gulf region and the rest of the country. 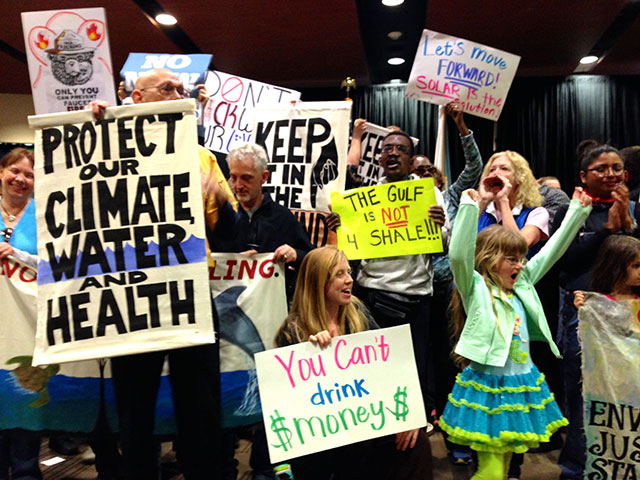 Protesters disrupt a federal auction of offshore drilling leases at the Superdome in New Orleans on Wednesday. (Photo: Mike Ludwig)

Lynn Ogden traveled from Pensacola, Florida, to protest the auction. She worked as a resource manager during the cleanup effort following the Deepwater Horizon disaster in 2010 and recalled seeing sick dolphins fleeing into shallow bays, and beaches covered in tar balls after the massive oil spill.

“That’s not what I want to see on our pristine white beaches of the Gulf,” Ogden said.

Environmental justice was a major theme of the action, with Native American and Black Lives Matter activists demonstrating alongside fracking opponents and members of national climate groups. Oil spills and toxic pollution from refineries and petrochemical facilities disproportionately impact low-income neighborhoods and communities of color, especially in Louisiana and other Gulf states, and many of these same communities are expected to bear the brunt of climate disruption. 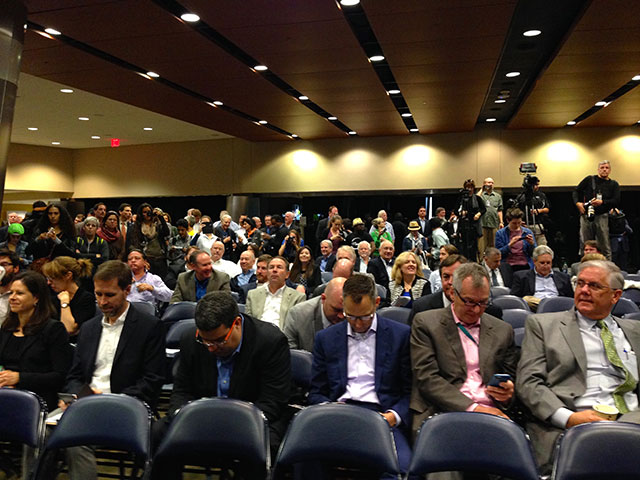 Representatives from oil and gas companies do not appear to be moved by the demonstration. (Photo: Mike Ludwig)

“The ethic of protecting the land and being stewards of the land instead of dominating the land is part of the overall environmental justice project,” said Ejike Obineme, a member of Black Youth Project 100 who traveled from Baltimore to protest the auction.

The protest comes just one week after the Obama administration came under fire from environmentalists for its 2017-2022 offshore drilling plan, which scraps a controversial proposal to allow offshore drilling in the Atlantic, but keeps the Gulf of Mexico and Arctic waters open to fossil fuel development, which opponents say will endanger marine ecosystems and contribute to climate change.

In a letter sent last week, a coalition of environmental groups demanded that President Obama place a moratorium on offshore drilling and cancel the auction along with another auction of Gulf waters planned for 2017. Many of the same groups traveled to New Orleans to protest the auction and rally in solidarity with local activists.

“The Obama administration is holding fossil fuel auctions after the Paris climate agreement, and everything about that needs to change,” said Jason Kowalski, the policy director at 350.org, as protesters encircled the Superdome.

Environmentalists are also demanding that the administration ban the use of fracking technology in offshore wells, a practice that has been under intense scrutiny in the Gulf of Mexico and is under a temporary moratorium in Pacific waters while regulators finalize an environmental risk assessment. 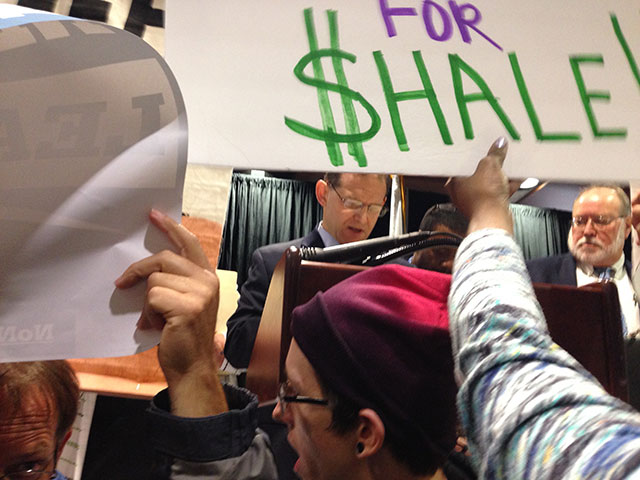 Surrounded by protesters, an official with the Bureau of Ocean Energy Management announces bids on oil and gas drilling leases in the Gulf of Mexico. (Photo: Mike Ludwig)

Dozens of groups sent a letter to federal offshore drilling regulators on Tuesday calling their draft risk assessment of fracking off the California coast “flawed,” and a group of 30 scientists sent their own letter asking regulators to extend the moratorium while a more detailed assessment is conducted.

Local activists also demanded that the oil and gas industry create 1,000 jobs in the Gulf region to fix its “aging infrastructure and toxic legacy, particularly in communities of color,” according to a statement from the environmental health group Louisiana Bucket Brigade and its allies.

The Louisiana Bucket Brigade tracks pollution and accidents at refineries and petrochemical facilities clustered in the state, which is one of the most polluted in the country. Director Anne Rolfes said that the people of the Gulf have let the oil industry drill and pollute the Gulf region for 100 years, and the protest marks an end to a “century of submission.”

“Clean, safe jobs are the jobs we want. This is the future we want,” Rolfes said. “If we don’t grab it now, we risk being left behind in an oily puddle.”

Leasing federal lands and waters to private energy developers is a source of income for the government, and the Obama administration’s latest offshore drilling plan suggests the practice won’t be ending any time soon. Wednesday’s auction brought in $156 million in high bids in exchange for nearly 700,000 acres of the Gulf of Mexico, but past auctions were more lucrative. Interest in oil production has decreased in recent months due to a global drop in prices.