The 99 percent came out in full force in Rome as Italy's capital city joined several other cities on Saturday, 15 October, in serving as a venue for massive protests against the current global economic crisis.

The legitimate concerns of the many (thousands) were overshadowed in the media by the details of violence perpetrated by the few. These concerns at Piazza San Giovanni, in front of the Lateran Basilica, echoed similar concerns being expressed in chants and slogans in the streets and squares of other cities, including no less than 80 cities in Spain, in the context of the plural movement “15M: democracia real ya” (15th May: Real Democracy Now!), and now, prominent globalized venues such as Athens' Syntagma Square (where the Greek Parliament is situated) and besieged Wall Street. They also echoed some of the concerns expressed as part of the “Arab Spring” in Egypt and Tunisia since the quest for democracy in these two countries should not obscure the fact that there is also an urgent quest for more jobs and decent employment in a region which has among the highest unemployment rates in the world; the unemployment rate hovers around the 25 percent mark, surpassed only by Sub-Saharan Africa. 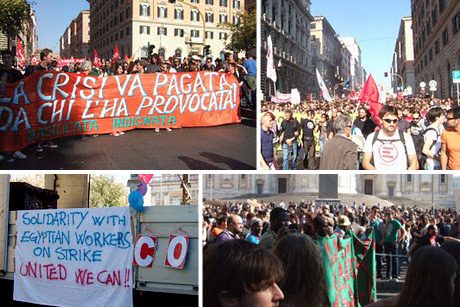 Most of the protests were, for the most part, peaceful, taking different forms and involving, in many cases, social media, streets and squares. The violence came from the state's repressive forces, as has been the case in Egypt; Tunisia; other parts of the Arab world (Libya, Syria, Yemen, Bahrain); and the USA. Rome constituted one prominent exception and this leads to a number of questions and considerations. The violence did not come from the vast majority of persons who, in their thousands, converged on Piazza San Giovanni, a prominent venue for political manifestations, including union manifestations, in Italy. And yet Italian state TV bulletins went overboard with their coverage of the violence by a group employing Black Bloc tactics, thus undermining the significance of the mass protest event. The violent minority group, disavowed by many of the demonstrators, were identified as anarchists who employ similar tactics in several manifestations, including the 2001 G8 Genoa Summit. 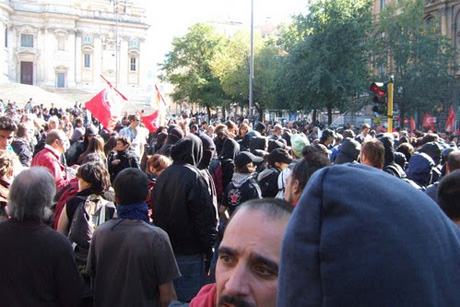 Conspiracy theories, which have even been floating across some Italian TV channels, suggest that the thugs certainly acted in the interest of those who want to maintain the status quo and who do not want to understand or acknowledge the reasons behind these manifestations of indignation. This recalls UK Prime Minister David Cameron's reference to the riots in the UK as “criminality pure and simple.” As argued by Sam Mclean, in the RSA Review, “Demonising whole communities or groups of people, taking away social housing and refusing to tackle the root causes of civil unrest will only serve to deepen the 'social misrecognition' that helps to explain why people feel able to resort to mass vandalism and violence in their own neighbourhood.”(1)

There were others in Italy who saw the violence as providing the right pretext to discredit the protest movement, which consisted of people of different political stripe (party symbols were at a premium in Rome and other cities such as Palma de Majorca).(2) It can serve to reinforce the hackneyed view that protests against neoliberalism predominantly come from the left, which is frequently presented, in certain media and political quarters, as having a “history of violence.” This evokes memories of “gli anni di piombo” (the years of lead) in the '70s, never mind the fact that different carnages – stragi – such as those at Piazza Fontana in Milan (12 December, 1969) and the Bologna train station (2nd August, 1980) were attributed to militant right-wing groups. The protests march in Rome involved people of different political persuasion, including professors, workers, and others who would normally not participate in these events.

Others can argue that infiltrators, such as those in Rome, represent extreme right-wing elements like those who often make their presence felt in and around Italy's soccer stadia (the so called ULTRAS – soccer fans who create an atmosphere to encourage their teams and intimidate the opposition, often going overboard with their actions which are often influenced by political ideologies – and “teppisti,” who engage in vandalism, violence, and other disturbances of the public peace), that earned Rome the appellation in a section of the UK press of “stab city.” They are a sinister straw in the wind. Some of these people would be bent on taking advantage of present disgruntlement and indignation to perpetrate what can at best be termed squadristi (violent and often murderous squads of the Fascist period) tactics.

Once again, conspiracy theories can easily emerge. The violence targeted at shops on the Via Cavour and the church at Piazza San Giovanni, in which symbols of Christianity such as a crucifix and the statue of a Madonna were destroyed, can reflect disgruntlement with not only capitalism, but also perceived church-state collusion in Italian politics, especially those of the post-war period. Protests in each locality focus on global issues alongside issues inextricably connected with the local context. Part of the anger in these mass protests was also directed at corruption and the ruling political class as well as at the global market economy.

Click here to read works by Peter Mayo and others in the Public Intellectual Project.

My interpretations of the violence are simply speculations concerning the actions of what really was a minority group who caught security forces unawares. Some of the police would have been reluctant to risk another Genoa situation (the killing of an activist by a security force member during the G8 summit), also given their “meager salary,” but many were engaged in scuffles. Over 100 are said to have suffered injuries in clashes with the thugs. There was also collaboration between the participants and the police.(3)

The Rome experience continues, however, to raise unsettling questions concerning where will these events lead, in the same way that questions are raised about the “Arab Spring” and its future trajectory. Experiences like those in Rome raise the issue that this current disgruntlement may result in a swing to either the right or left. Lessons from 20th century history indicate that fascism often thrived on situations of popular disgruntlement and social unrest. Although I do not see this happening at the present time, I would be cautious about any predictions concerning the potential outcomes of these protests, especially in Western societies.

A prominent Italian, Antonio Gramsci, once wrote about “spontaneity” (spontaneita`) and “conscious direction” (direzione consapevole). Are these protest gatherings being consciously directed? If not, isn't there the danger that these “movements” take a trajectory which is much different, in political orientation, from what is being augured in the spaces of outlets such as this one (Truthout)? Alternatively, if the answer to the same question is “yes,” where is the “conscious direction” coming from? There are no guarantees in this politics of popular indignation and mobilization.

And, yet, these mobilizations of people, clamoring for greater transparency, meaningful democracy and grassroots participation, nourish hope for the creation of a world in which people are placed before profits and where the public good takes precedence over the vagaries of the market. The presence of youth in the Rome manifestation, as elsewhere, indicates the impatience of those who hold out the promise of a better future. Short-changed, rendered déclassé and forced to live a precarious life, they express their indignation toward a situation that cannot persist any longer, uniting in a global chorus of “Ya Basta! In Spain, one of the slogans was “No somos mercancía en manos de políticos y banqueros” (we are not merchandise in the hands of politicians or bankers – see El País.com España.

Youth feature in the various movements represented throughout the world, including such movements as the Via Campesina, present at the forefront of the Rome manifestation. The Via Campesina movement is an international movement, which brings together men and women farmers, small scale agricultural producers, landless peasants, indigenous people, migrants from different parts of the globe and is in favor of small-scale sustainable agricultural production as opposed to transnational and corporate-driven agricultural production. It represents a global movement with a cosmic vision for change concerning southern people, including the dispossessed and landless peoples, who maintain a relationship of respect and harmony with Mother Earth and the oceans.(4) Despite the impossibility of predicting where this will all lead, youngsters whose politically engaged action and vision encompass such larger global dimensions, reflecting a strong sense of international solidarity, constitute significant resources of hope.

2. I am indebted to participant Loris Viviani for this information.

3. I am indebted to participant Patrizia Morgante for this information.