As Secretary of State Hillary Clinton spoke in Washington, D.C., on Tuesday about the failures of foreign leaders to respect people’s freedoms, a 71-year-old U.S. veteran Army officer, a man who spent 27 years in the CIA and delivered presidential daily briefs, a peace activist and proponent of nonviolence, the man who famously confronted Donald Rumsfeld for his war lies, the man who drafted our letter to Spain and delivered it to the Spanish Embassy on Monday, our friend Ray McGovern turned his back in silence. As Clinton continued to speak about respecting the rights of protesters, her guards — including a uniformed policeman and an unidentified plain-clothed official — grabbed Ray, dragged him off violently, brutalized him, double-cuffed him with metal handcuffs, and left him bleeding in jail. As he was hauled away (see video), Ray shouted “So this is America?” Clinton went right on mouthing her hypocrisies without a pause. 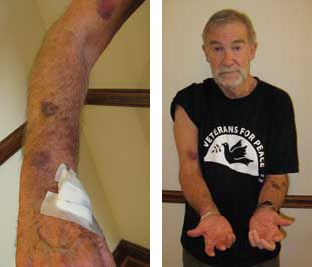 Ray told Rob Kall at OpEdNews what he had been protesting by standing silently with his back turned:

“Hillary is the driving force, together with a few others, behind the wars in Afghanistan. She’s one of the big hawks in Iran. When I look at her and her husband that they don’t know the first thing about war. I do and so do my fellow Veterans for Peace. I have to make clear that we Veterans for Peace think that her policies are an abomination to the nation, that they are at cross purposes to the country and not everybody should applaud and give her the idea that she’s doing the right thing.”

“I knew that Hillary knew, at the beginning of the war, that Hillary knew how things would go. There was a young lady who was working as Hillary Clinton’s personal staff chief, when she was a senator in 2002 and 2003, was in a class I taught in DC and I’d ask her to give her boss articles I wrote. And she did give them to her. So I know that. She made a political calculation that she needed to be strong because she was a woman even though she knew from us that the unintended consequences would be catastrophic. She knew all that and made that calculation.”

“The height of irony, of course, is that was her tragic flaw that let Obama beat her. She supported the war and Obama didn’t. She is the height of hypocrisy. When people die because we have hypocrites at the top of our government, that compels me to make a statement in whatever way I can. It was not the theme of her speech that I was protesting. It was her war policies and support of Mubarak.”

“They grabbed me and the shock wore off. There was a real struggle. I shouted, ‘This is America.’ Then I said, ‘Who are you?’ This is a mystery to me. Who were they? The guy in the suit was the one who did the damage. He was brutal.”

“They took me outside, put two sets of iron handcuffs that pierced my wrists. The bleeding went all over my pants. One guy said, “I pricked my finger” like it was his blood.”

“I was bleeding in the car so I said ‘I think you need to put some gauze on me.’ They handed me to the DC police and they told I was being charged with disorderly conduct. I was booked, fingerprinted, mug shot taken. They put me in a little cell — must be the same size as Bradley Manning’s— about six by four feet.”

“It was about three hours that they held me until they let me out. I had to take a cab to the hospital where they x-ray’d me, treated me and dressed my wounds. Then the doctors told me that since this was an assault on me, I had to inform the police about who had assaulted me. A little humor helped then.”

Ray compared this incident to his earlier questioning of Donald Rumsfeld, an incident in which Ray did not stand in silent protest but rather waited for his turn at the microphone and did something U.S. journalists tend not to: asked uncomfortable questions:

“When Clinton started talking about how people beat up and arrested people in Iran, it gave some poetic justice, a great irony, to my standing there and what happened to me then, when she’s talking about what happened in other countries and there I am being handled in a vicious way…God knows what would happen next. Maybe some senior would ask her questions [she doesn’t take questions]. As bad as Donald Rumsfeld was, he let me speak. He let me speak and engaged me in dialog.”

“At the same [Rumsfeld] speech, there was a courageous guy who stood with his back to Rumsfeld the entire speech. They left him completely alone and he walked out at the end, unbothered. Four years later, things have changed.