The Dongria Kondh reside far from the studios of Hollywood. Its 8,000 members live in little dried mud houses covered with palm leaves, with neither electricity nor television, withdrawn from the world on a mountain of the Orissa region in the most remote reaches of eastern India. Yet, their history resembles the scenario of James Cameron’s box-office-record-breaking film “Avatar,” to the point you could imagine the movie was based on it.

Like the Na’vi tribe, which, in the film, desperately tries to prevent humans from exploiting the mining resources of their sacred lands, the Dongria Kondh are threatened with expropriation by a British company – Vedanta Resources – that wants to mine their mountain’s bauxite.

“The drama of ‘Avatar’ – if one takes away multi-colored lemurs, long-nosed horses and android warriors – is playing out today in the hills of Niyamgiri in Orissa,” explains Stephen Corry, director of the nongovernmental organization (NGO) Survival International, which defends indigenous peoples.

Monday, February 8, the NGO published an appeal for help for the little tribe in eastern India to James Cameron in Variety, an American magazine devoted to the entertainment industry. “Avatar is fantasy … and real. The Dongria Kondh tribe in India are struggling to defend their land against a mining company hell-bent on destroying their sacred mountain. Please help the Dongria. … We have seen your film. Now envision ours,” the NGO asks him. 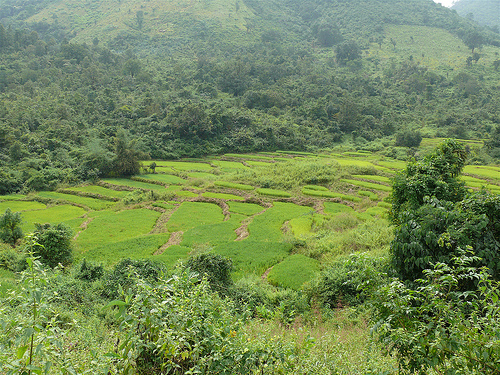 In Orissa, the hills of Niyamgiri are venerated like temples, since, according to the beliefs of the Dongria Kondh, they shelter the spirit of the god Niyam Raja. Every day, the inhabitants pray before little wooden statuettes placed along dirt paths, with offerings of fruit or sacrificed animals set at their feet.

As far as the giant British mining company Vedanta Resources, owned by Indian billionaire Anil Agarwal, is concerned, the main interest of these hills is that they shelter bauxite deposits of exceptional quality. A factory has already been built at the foot of the hills to transform the bauxite into aluminum. But it awaits the mine opening to operate at 100 percent capacity. One hundred and twenty families from the Dongria Kondh tribe who have agreed to be hired now live in concrete houses.

Vedanta Resources has promised them medical infrastructure, schools and lands to reconvert to agriculture. Many of the tribe’s children have been victim to malnutrition, and barely five percent of the population know how to read or write.

Disappearance of the Forests

However, according to a report published Tuesday, February 9, by the NGO Amnesty International, the factory inaugurated in 2006 by Vedanta Resources has already begun to pollute watercourses, threatening the health of inhabitants. “We are accustomed to bathing in the stream. But now, I’m afraid to take my children there. My two sons complain of itching,” testified one resident, according to the report’s authors.

Local NGOs also fear the disappearance of the dense forest that serves as “pantry” for the Dongria Kondh. The inhabitants live from gathering and also seek medicinal plants in the thick vegetation that surrounds them. The Indian Flora and Fauna Institute has warned against the irreversible damage to the environment that mining will entail.

Friday, February 5, the Church of England announced that it was withdrawing its participation in Vedanta Resources’ capital – where its share was six million dollars – because the company did not meet its expectations with regard to “respect for human rights.” Two years earlier, the Norwegian sovereign fund withdrew its capital for the same reasons.

Local NGOs denounce the threats and intimidation, to which members of the tribe are victim, to leave their lands. In spite of these criticisms, on Tuesday, February 9, the company noted that it would spend ten million dollars to protect the hill and that it would “stimulate the economy of local communities” thanks to the mine’s opening. The project, which obtained a green light from the Indian Supreme Court in August 2008, should begin in a few months. The Dongria Kondh tribe seems closer to extinction than to “Avatar’s” happy ending.