An evaluation of the first 100 days of the new President of the United States has become a tradition of sorts in the US; it serves as a metric by which traditional media, politicians, scholars and the general public assess the president’s projected policies. The 100-day evaluation serves as an informal yet widely recognized criterion for publicly gauging the effectiveness and tone of the incoming president’s qualities as a leader. Yet this phenomenon has not always existed. The first-100-days evaluation has its roots with Franklin D. Roosevelt (FDR), who launched the concept when he took office in 1933. The day Franklin D. Roosevelt assumed the presidency, the US was suffering from the Great Depression. A quarter of the nation’s workforce was jobless and a quarter-million families had defaulted on their mortgages the previous year. During the winter of 1932 and 1933, some 1.2 million Americans were homeless. During FDR’s first 100 days he signed into law 15 major pieces of legislation aimed at combating the Great Depression. It’s 2017, and current President Donald J. Trump (DJT) has pledged to deliver an energetic “100-day action plan to make America great again.” My question for DJT today would have been the same for FDR in 1933.

By juxtaposing aspects of President Roosevelt, the architect of both the inaugural 100-day concept and the original New Deal, with current President Trump (who also has a 100-day action plan and a new New Deal), it can be argued that based on their actions, neither FDR nor DJT were/are truly concerned with addressing systemic oppression faced by members of various Black communities in the United States.

While some may argue that Donald Trump’s campaign and subsequent election triggered a reimagined, non-economic articulation of an American great (mental health) depression, FDR faced the most severe economic crisis of the modern era. During his 1932 run for the Oval Office, Roosevelt asserted that he would help “the forgotten man at the bottom of the economic pyramid.” Committed to helping those suffering the most from the economic downturn, he pledged himself to “a new deal for the American people.” Trump proposed his version of the New Deal on October 31, 2016, which he titled, “Donald J. Trump’s New Deal for Black America.” As promoted on his website, Trump’s New Deal for Black America opens by stating:

Trump was correct in his assertion that the “old new deal” (and, overall, FDR’s presidency) largely did not benefit those within the Black community. It did not bring to an end the tremendous injustices that Black folks had to suffer on a day-to-day basis, and some of the governmental initiatives under his presidency, such as the work of the Federal Housing Administration, served to build rather than break down the racialized walls of segregation during the Jim Crow era.

As concerns surrounding people across the US defaulting on their mortgage loans during the Great Depression swelled, FDR stepped in so that particular groups of American citizens could afford to buy their homes. On June 13, 1933, FDR established the Home Owners Loan Corporation (HOLC), which spent some $3 billion refinancing mortgages for particular people who had trouble making their mortgage payments. Neighborhoods were color-coded and marked as A (green), B (blue), C (yellow), or D (red). An “A” neighborhood was suburban with recent construction, low crime, business and professional people — a white neighborhood. As Ta-Nehisi Coates reminds us, “neighborhoods where black people lived were rated ‘D’ and were usually considered ineligible for FHA backing. They were colored in red. Neither the percentage of black people living there nor their social class mattered. Black people were viewed as a contagion.” FDR’s FHA explicitly refused to back loans to Black people, serving as the genesis for redlining as we know it today — a redlining that led to perpetual divestment in Black communities across the country.

Historically, FDR is widely celebrated by Americans for implementing the New Deal and is considered one of the greatest presidents to ever hold the White House. In fact, during a 2015 Washington Post survey, FDR was ranked the third greatest POTUS ever, trailing behind George Washington and Abraham Lincoln.

I assume that the Washington Post did not conduct this survey within a pool of Americans versed in FDR’s anti-Black political ways. If they did, it may have been exposed that FDR worked with Southern segregationist Dixiecrats, turning a blind eye to their upholding of Jim Crow apartheid, a system so nefariously pervasive that many Christian ministers taught that Black folks were cursed and predestined to be slaves of whites by way of God through the Hamitic Hypothesis. Jim Crow ideology was so flagitiously ubiquitous that, at every social institutional level, it reinforced the belief that Black people were innately intellectually, culturally, spiritually and moralistically inferior to whites. Or possibly, it would have come up that FDR appointed Alabama Senator Hugo Lafayette Black, a publicly known member of the Ku Klux Klan, to the Supreme Court in 1937. Maybe the Post would have found out that, in 1941, Franklin D. Roosevelt appointed James F. Byrnes, a former US senator from South Carolina and staunch segregationist who believed that lynching Black people was necessary “in order to hold in check the Negro in the South,” to the US Supreme Court.

It’s apparent that FDR was not looking out for every “forgotten man,” woman and child “at the bottom of the economic pyramid,” as he promised, which can be explicitly seen via the redlining and his silence on the upholding of Jim Crow in exchange for political backing of the old New Deal. Clearly DJT’s New Deal for Black America is not going to forget about the people that he refers to as “the Blacks.”

Trump’s New Deal for Black America is a 10-point program that emerged during his presidential campaign on October 31, 2016. This haphazardly contrived document comes across as an under-nuanced attempt to attract and capture the Black vote. While each of its 10 points merits thorough consideration and analysis, I will highlight just some particularly troubling points that stood out during his first 100 days as Commander-in-Chief (which happened to take place during Black History Month) that magnify Trump’s disconnect with non-monolithic Black America.

Point number nine of DJT’s New Deal for Black America articulates his intention to “protect the African-American Church.” It continues by stating, “We will protect religious liberty, promote strong families, and support the African-American church.” This sounds well intentioned, until one puts non-Christian Black religiosity in the US under a microscope, putting it in conversation with the “Muslim Ban” and increased Islamophobic behavior in the US. 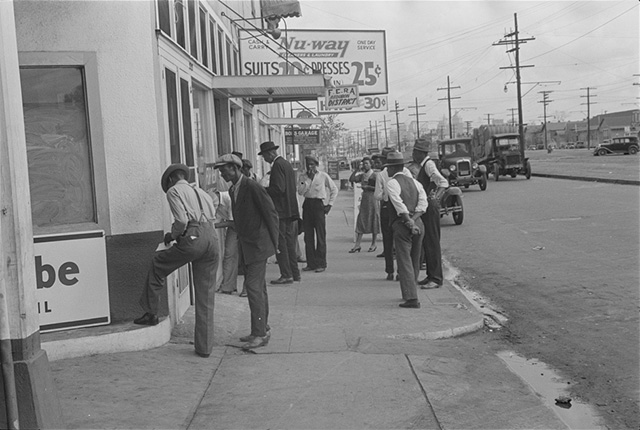 Scholars, such as African Diasporic historian Sylviane Diouf estimate that anywhere from 25 to 33 percent of the Africans forced to endure the hellish condition known as chattel slavery in the United States were Muslims, and as Allan D. Austin notes in his book African Muslims in Antebellum America, “until very recently,” this fact “had been almost completely neglected by modern America’s eagle-eyed historians and storytellers.” Today, Black folks in the US constitute roughly a third of the American Muslim population, and as the Pew Research Center points out, “Among the roughly one-in-five Muslim Americans whose parents also were born in the U.S., 59% are African Americans, including a sizable majority” who have self-identified as having reverted “to Islam (69%).” I say all of this as a concrete reminder that the Trumpian political discourse actively fosters and sanctions a toxic social environment enabling a systemic attack on Muslims in America. This is very much akin to racism faced by Black Americans, both historically and contemporarily, and also parallels the type of racialization faced by people of African descent throughout the Black Diaspora. Much like FDR, who purposely neglected to face what was happening to Black Americans during the Jim Crow era, DJT is neglecting violations of the “religious liberties” of Black people who worship not in an “African American church,” but in a mosque, while being the descendants of Africans forced to live in the US as slaves.

Like FDR, DJT is politically aligning himself with politicians with a documented history of racism. These people include Attorney General Jeff Sessions, who, in 1986, had his nomination to a federal district court rejected after people who had worked with him in Alabama testified under oath that he had made racially charged remarks, including calling a Black prosecutor “boy,” joking about his support for the Ku Klux Klan, and referring to the NAACP as “un-American.” Trump also decided to elevate former Breitbart head Steve Bannon to a chief strategist role. Former Breitbart editor Ben Shapiro, who worked alongside Bannon, wrote on the Daily Wire that “under Bannon’s leadership, Breitbart openly embraced the white supremacist alt-right … with [now former Breitbart editor Milo] Yiannopoulos pushing white ethno-nationalism as a legitimate response to political correctness, and the comment section turning into a cesspool for white supremacist meme-makers.”

While times have changed since the days of FDR and the original 100-day concept, not much has changed with regards to Black folks dealing with systemic issues of oppression in the United States. During FDR’s New Deal, Black communities were terrorized by the ills of Jim Crow segregation and its pervasion of every aspect of American society. As historian Ira Katznelson points out in his book Fear Itself, the segregationist Dixiecrats that FDR worked with supported the Tennessee Valley Authority, but only so long as the cheap electricity it produced flowed exclusively to communities that were strictly segregated, serving as a form of energy redlining. Likewise, Black folks were specifically excluded from New Deal legislation that secured benefits and set minimum wages for farm laborers and domestic servants, two of the most prominent employment spaces occupied by Black Southerners during the Jim Crow era.

Eighty-four years have passed, and Black communities are now dealing with the New Jim Crow, with a new president, proposing a new New Deal for Black America. An America in the midst of the resegregation of K-12 schools, where Black students are the most likely racial group to attend what researchers call “apartheid schools” — schools that are virtually all nonwhite and where poverty and limited educational/technological resources abound. An America where Black folks are incarcerated in state prisons at an average rate of 5.1 times that of white Americans (in certain states that rate is an alarming 10 times or more). Black folks in the US don’t need a new New Deal; Black folks in the US need a deal that is not undergirded by racialized systemic oppression and has its basis in claims of legitimate citizenship.

Share
Copyright, Truthout. May not be reprinted without permission.
Ameer Hasan Loggins

Ameer Hasan Loggins is a Ph.D. candidate in African diaspora studies at the University of California, Berkeley. His research explores reality television as a social phenomenon and its effects on the perception of African Americans outside of a televisual space. Follow him on Twitter: @LeftSentThis.