Employment rates of workers without high school degrees are near pre-recession levels.

The Labor Department reported that the economy added 236,000 jobs in February. With a small downward revision to job growth over the prior two months, this brings the average growth rate over the last three months to 191,000. The unemployment rate fell to 7.7 percent, but this drop was largely attributable to a decline in labor force participation. The employment-to-population ratio (EPOP) was unchanged at 58.6 percent, exactly the same as the rate in February of 2012 and just 0.4 percentage points above the low hit in the summer of 2011. This compares with an EPOP of 63.0 percent in 2007. The 54.8 percent employment-to-population ratio for women is just 0.2 percentage points above the low hit last month.

The decline in labor force participation in this cycle has been striking. While the unemployment rate has dropped more than 40 percent of the way back to its pre-recession level, the employment-to-population ratio is still far closer to its trough than its pre-recession peak. While women have fared better than men, this is because they did not see the same sort of steep hit to employment at the start of the downturn. In the last couple of years the gap in performance has been closing with the EPOP for men rising and the EPOP for women drifting lower. 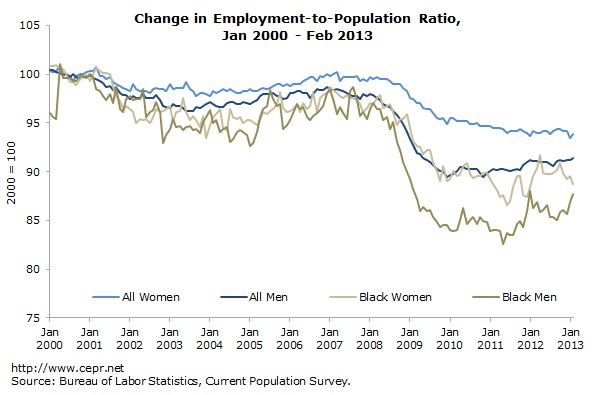 Among the big job gainers in February was construction, which added 48,000 jobs in February after adding 25,000 in January. Given the uptick in housing we should expect to see more construction employment, but this jump was likely driven in large part by unusually good winter weather. Good weather likely also contributed to the 23,700 jobs added in retail after an increase of 29,000 in January. Manufacturing added 14,000 jobs, its fifth consecutive increase. The direction is good, but the pace is very slow.

The healthcare sector added 32,000 jobs, offsetting a relative weak rise of 13,000 in January. Restaurants added 18,800, roughly their average over the last year. The employment services sector added 21,100 jobs. This could be a sign of increased permanent hires in the future, but may also just be an anomaly. In the latter category, the motion picture industry added 20,800 jobs. This will be reversed in coming months. The government sector continued to shrink, losing another 10,000 jobs in February.

There was some modest good news on the wage front with the average hourly wage increasing at a 2.85 percent rate in the last three months compared to the prior three. This would indicate some acceleration and actual real wage growth, but it is way too early to assume the pattern will continue.

The 236,000 new jobs reported for February are a good sign and better than generally expected, but there is the risk that this is being driven by unusually good winter weather. This could lead to a situation like we saw last year with very weak job growth in the spring as the result of hiring being pulled forward. This is basically a picture of an economy that is showing modest growth, but has not yet felt the impact of the end of the payroll tax cut and the sequester.