The EPOP for women fell back to its low-point for the downturn.

The Labor Department reported that the economy added 88,000 jobs in March, the slowest monthly job growth since last June when it added 87,000 jobs. In spite of the weak reported job growth, the unemployment rate edged down to 7.6 percent. However, like the February decline, this drop was also associated with people dropping out of the labor force. The household survey reported a decline of 496,000 in the size of the labor force. The employment-to-population ratio (EPOP) fell to 58.5 percent, just 0.3 percentage points above the low hit in the summer of 2011. The EPOP for women fell by 0.2 percentage points to 54.6 percent, tying the low hit in January.

The weak job growth in the establishment survey should not have been a surprise. Some of the numbers behind the February increase were clearly weather related flukes, most notably the 48,000 jobs reported in construction (revised to 49,000). The sector reported 18,000 new jobs in March, which is likely closer to the underlying rate of growth. Manufacturing lost 3,000 jobs after adding 19,000 in February.

Retail was the big job loser, shedding 24,100 jobs driven by declines in building supply and clothing stores. The former was likely weather related, while the latter reversed extraordinary job growth in the fall. The other big job loser was the postal service, which lost 11,700 jobs. Postal employment is now down 188,000 (24.0 percent) from its pre-recession level.

Temporary employment added 20,300 jobs and health care added 23,400 jobs, both pretty much in keeping with recent trends. Accounting added 10,700 jobs after adding 12,800 jobs in February. This is likely due to tax filings as individuals and firms deal with changes to the tax code. The other noteworthy increase was a rise of 2,300 jobs in motion pictures after an increase of 22,500 jobs in February. Employment in the sector is now 11.0 percent above the year-ago level; this rise is likely to be reversed in the months ahead.

Apart from the drop in EPOPs there were few other surprises in the household data. Older workers continue to do the best in the labor market, with employment for those over age 55 falling by just 11,000. The over 55 age group accounts for 1,069,000 of the 1,266,000 growth in employment over the last year.

Interestingly the unemployment duration measures increased again in March after falling sharply in January. The median duration was up to 18.1 weeks compared with 16.0 weeks in January, the average duration rose to 37.1 weeks in March from 35.3 weeks in January. This is consistent with a story where many workers dropped out of the labor force after the period of emergency benefits was cut back at the end of 2012.

One positive item is that the share of unemployment due to people voluntarily quitting their jobs rose to 8.4 percent, the highest since last March. This can be an indicator of workers’ confidence in their job prospects, but we would have to see it persist for a longer period of time for that to be the case. 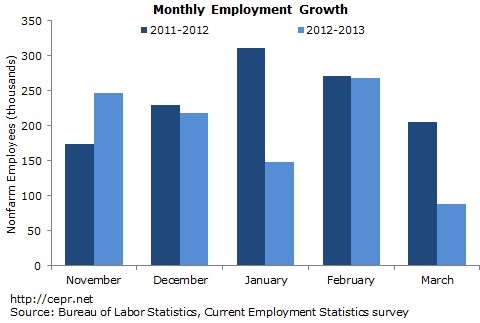 The March report should end the excessive wave of optimism that led many analysts to claim the economy had reached a turning point and to talk about the end of the Fed’s quantitative easing policy. It is bizarre that this sort of talk ever gained much currency. After all, the economy grew at just a 1.6 percent annual rate in the second half of 2012. While the February jobs report was better than expected, and the last five months showed somewhat more rapid growth than the year-round average, it was well below the pace from a year ago.