“We are not satisfied because they have only captured those that executed her. The intellectual authors — those who ordered it, those who paid for it — are enjoying complete impunity,” said Austra Flores, mother of slain Honduran activist Berta Cáceres, from her home in La Esperanza, before the latest arrest of a suspected hitman.

Cáceres has become one more human rights defender killed who had precautionary measures meant to protect her life granted by the Inter-American Court of Human Rights. From the beginning of a botched investigation that was described as a “crime of passion,” to the stolen case file from a judge assigned to the murder trial, all roads lead to impunity for Cáceres’ assassins. Now, two key figures in the case — Berta’s mother and the sole witness to Berta’s assassination, Gustavo Castro — are once again taking aim at the Honduran government led by Juan Orlando Hernández. Hernández, meanwhile, is seeking to extend his presidency via changes to the constitution despite rising protest and a political opposition alliance that has formed in Cáceres’ name and is rallying to defeat him in the upcoming primary elections. 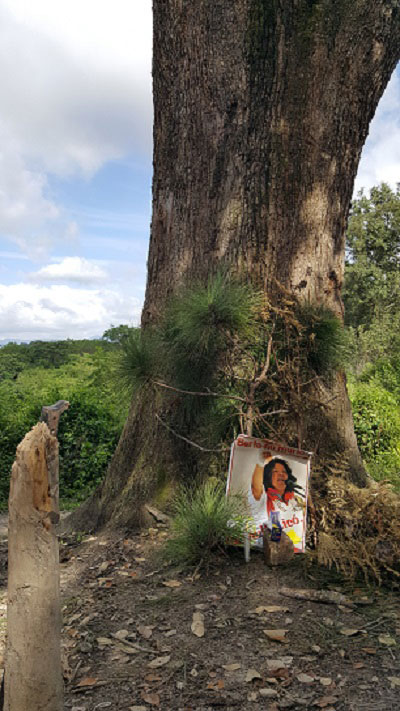 A small altar for Berta Cáceres in Rio Blanco on the road once blockaded by the local Lenca community to prevent machinery for the notorious Agua Zarca dam from passing. (Photo: Suzanne Llewellyn)The malevolent forces that came together to plan and execute Cáceres’ assassination were private and state actors — the very targets of her campaign to stop the privatization and seizure of Honduras’ natural resources. Cáceres organized Indigenous Lenca communities opposed to the hydroelectric dam Agua Zarca being constructed by a Honduran company with the help of international financiers and state armed forces. Yet Cáceres’ work was not singularly focused on ending one project. She was the founder of a leading Lenca organization — the Civic Council of Popular and Indigenous Organizations of Honduras (COPINH) — and she was a member of various Honduran opposition groups organizing against the repressive Honduran state and creating a movement for democracy and justice, which her organization brilliantly connected to the people’s struggle for land, rights and justice everywhere. It was this strategic organizing and international vision that fatefully brought together Cáceres and Gustavo Castro, coordinator of Other Worlds in Mexico, for a forum on “Alternative Energy Through COPINH’s Indigenous Vision” days before her death.

On March 3, 2016, when the assassins broke into Cáceres’ home, Castro was unexpectedly inside. He was shot during the attack and left for dead with Cáceres, who eventually died in his arms. He thus became the sole survivor and witness to this gruesome crime. Yet, for Castro, this would prove to be only the start of a traumatic ordeal. The Honduran state failed to treat Castro as a protected witness and illegally detained him in Honduras for weeks following the assassination, despite his cooperation in the investigation, his lawyer’s appeals and the viability of cooperating from Mexico, where he would be presumably safer.

On January 16, 2017, Castro formally lodged an international criminal complainty 16, 2017, Castro formally lodged an international criminal complaint in the Inter-American Commission on Human Rights against Judge Victorina Flores, who, last March, illegally issued a 30-day migratory alert on Castro, preventing him from leaving the country. He had previously filed another complaint against the Honduran state — including Judge Flores, the attorney general’s office and the Honduran Supreme Court — for illegally detaining him in the country and rejecting multiple appeals for habeas corpus.

In December 2016, during a sit-down interview, Cáceres’ mother, Austra Flores, a notable opposition and community leader in her own right, expressed that she does not believe justice will be served under the Hernández administration. When asked what can be done when many consider the Honduran government complicit in the assassination of her daughter, she responded, “For this to be reversed and for justice to be done, we would have to have a different government, a government that doesn’t lie, because this president is a liar, along with all his other people…. We need support … for [people] to echo our voices in their countries where our entire world hears the reality that we are living.”

Austra Flores is not alone in her strong anti-government sentiment. The assassination of her daughter, who was widely known and loved, has fueled the people’s rising discontent with the Honduran government, which may prove to be the tipping point for the downfall of the Hernández-led government. In a social media survey carried out from December 18-31, 2016, the Honduran newspaper El Libertador found that 80 percent of more than 3 million respondents considered Hernández to be the worst government official of 2015. Similarly, Radio Progreso Reflection, Investigation and Communication Team’s 2014-2015 National Public Opinion Survey15 National Public Opinion Survey found that 1,571 respondents gave an average rating of 4.7 out of 10 to Hernández’s administration in the last two years; this was down from a rating of 5.42 in 2014. In the latest poll published on January 30, 2017, done by the same group, respondents’ average rating of the president was 5.15 out of 10, a slight improvement in low approval ratings, although 32.5 percent of the population surveyed considered the Honduran government as having “no achievements.” Negative public opinion about the government has increased, but the real threat to Hernández’s power is that this popular discontent has translated into attempts to strengthen and unify the opposition. From high-level American and European diplomats attending Cáceres funeral, to celebrities tweeting about the injustice of her murder and the spread of the popular slogan of “Berta did not die, she multiplied” — something is changing in the social and political context in Honduras, which has been simmering for a long time.

Since Cáceres’ assassination, a couple of umbrella opposition groups have formed: the Popular Honduran Articulation Berta Cáceres, which is seeking to establish an independent (read: not Honduran-led) investigation into the assassination of Cáceres; and secondly, the Alliance of the Opposition Parties, which has brought together three political opposition parties in Cáceres’ name solely to defeat Hernández in the primary elections set for March 12, 2017. Some believe the alliance will succeed, if of course, there are clean and fair elections, although its fight against the economic and political elite and conservative sectors in Honduras will by no means be easy.

For Gustavo Castro, “the assassination of Berta has been the event that has marked a turning point in the history of Honduras.” But, he adds, “The interest, the corruption and impunity are so entrenched in Honduras, that this means much more is needed than protests, solidarity and monitoring of its actions for the situation to change for the people of Honduras.” The Honduran resistance movement has certainly had a long trajectory in the country, yet Cáceres’ assassination in the post-coup context has emboldened civil society and may be a key catalyst for change in Honduras, as seen in the historic alliance of political opposition parties that was brought together in her name. Cáceres’ daughter Laura Zúniga understood the change happening in Honduras and her mother’s significance when she proclaimed at her mother’s vigil, “My mother is not assassinated. My mother is planted and is born and reborn and this, what they wanted to extinguish today, this fire that is the people’s struggle — the only thing they did was ignite it, because they wanted to extinguish the fire with gasoline.”

Want to see more original Truthout stories like the one you just read? They’re only possible because of reader support: Donate today to help independent journalism survive!

Share
Copyright © Truthout. May not be reprinted without permission.
Gloria Jiménez

Gloria Jiménez is a Latina activist who has done on-the-ground solidarity work in Nicaragua and Honduras. Follow her on Twitter: @gloria_elena