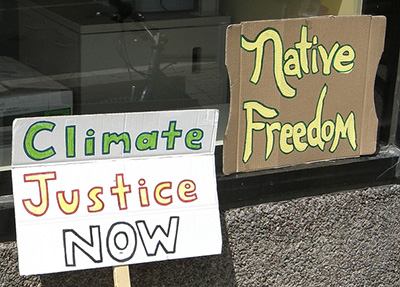 (Photo: Toban Black / Flickr)On a cold winter night on January 22, 71-year-old grandmother Carol Marsh sat down in front of a megaload-sized vehicle hauling tar sands processing equipment through Missoula, Mont., en route to Canada. While more than 40 other protesters watched from the street’s edges, Marsh informed the police traveling with the load that she did not intend to move. After about five minutes Marsh was arrested, having temporarily delayed the load and driven up the cost of transporting it through Montana to the tar sands region of Alberta.

Marsh’s story was quickly picked up by local news outlets and spread across activist social media networks. Much of the media attention focused on the image of a lone grandmother blockading a giant piece of tar sands mining equipment. However, Marsh’s action — as is so often the case with the moment in a demonstration deemed most newsworthy — should be understood as one piece of a much larger organizing effort spearheaded by indigenous activists.

The work leading up to the January 22 protest began in early December, when Missoula activists and citizen groups learned that heavy haul companies were planning to transport tar sands processing equipment through Missoula on their way to Alberta. Almost immediately, a group of Missoulians (including me) started meeting to plan a response. Although multiple groups were involved, the driving force was Indian Peoples Action — a Butte, Mont.-based organization.

The enormous role Native American organizations played in the protest was largely lost in media coverage immediately following the action, but is incredibly important for understanding how the blockade on January 22 came to be.

“We were acting on behalf of our indigenous brothers and sisters in the First Nations communities of Alberta, who have been affected most directly and severely from the contamination of their water, air and wild natural food sources,” said George Price, an Indian Peoples Action member and professor of Native American Studies and African American Studies at the University of Montana. “We also expressed that all life on Earth is being deeply affected and endangered by this filthy and completely unnecessary business.”

It wasn’t the first time Missoula had rallied to oppose tar sands megaloads. In 2010 and 2011, residents of the Montana town protested plans by Imperial Oil and ConocoPhillips to transport megaloads down Highway 12 through Idaho’s Clearwater National Forest and into Montana, passing through Missoula along the way. Concerned about natural areas along Idaho and Montana’s scenic highways — as well as the tar sands industry’s contribution to climate change — a coalition of groups including the Sierra Club, National Wildlife Federation, and many others mounted legal challenges against oil companies’ right to travel through sensitive national forests.

Concurrently, grassroots groups like Northern Rockies Rising Tide launched a direct action campaign, vowing to literally stand in the way of the megaloads. When an early ConocoPhillips shipment passed through Missoula, Carol Marsh and then-50-old Missoulian Ann Maechtlen stood in the way until they were removed from the road by police, but not arrested.

Imperial and ConocoPhillips’ megaload plans unraveled soon after that, in the wake of successful environmentalist lawsuits. But in August 2013, heavy haul company Omega Morgan took advantage of a Forest Service that was dithering over whether it had authority to block megaloads from Highway 12, and rushed a load through. It was intercepted by protests on Nez Perce lands and eight Nez Perce Executive Council members were arrested peacefully blocking the road. A judge soon ruled that the Forest Service could indeed bar the loads from Highway 12, effectively halting the megaloads for a while.

Then news emerged that haulers were planning to use a new route to transport a batch of megaloads to Alberta. They would travel from Oregon’s Port of Umatilla, up through Idaho on Highway 93, and into Montana. Although the new route avoided the Clearwater National Forest, the loads were still set to pass through Missoula.

Suddenly, Missoula again faced the prospect of becoming a transportation corridor for an industry that — through its extraction of tar sands — is causing one of the planet’s worst environmental and climate disasters. But the coalition that led the fight against the tar sands megaloads last time had largely drifted apart. Many nonprofits that helped coordinate the campaign in 2010 and 2011 were engrossed in other priorities, while Rising Tide organizers had moved to other states.

Nevertheless, when the load that was blocked by Nez Perce tribal members eventually reached Missoula in August 2013, it was met by a loose assortment of protesters who filed into the street at a crosswalk and delayed it as long as possible. Some remaining Rising Tide members helped organize the protest, but the group that played the crucial role was Indian Peoples Action. Going forward, they were the ones who took the lead in ensuring other megaloads did not pass through Missoula without a fight.

In late 2013, the next batch of megaloads began the journey to Alberta using the new route, and once again Missoulians mobilized. A hastily formed organizing committee — composed mainly of Indian Peoples Action members, plus a few non-Indian allies (again, including me) — determined to plan a more elaborate action. We believed it was important to at least temporarily halt the loads, both because every minute of delay was a minute the equipment would not be used in the tar sands, but even more importantly because of the opportunity to focus public attention on the issues of climate change and extraction, while sending a message about the community’s determination to oppose fossil fuel projects.

“It was our intention to enter the street together,” said Price, in regards to the plan devised by Indian Peoples Action, “and halt the movement of the equipment however long we could by leading ourselves and our non-Indian allies in a traditional round dance, which is a form of prayer and a symbol of unity.” Our committee also hoped police would be reluctant to break up a round dance, allowing us time to delay the load longer than would otherwise have been possible.

On January 22, the first of three megaloads that were traveling at the same time made it to Missoula. It was greeted by around 40 people, most of whom were affiliated with Indian Peoples Action. We held our round dance and halted the load. After that, Carol Marsh’s arrest delayed it another few minutes. A second, relatively smaller megaload arrived the following night, and was greeted by a smaller group of protesters. This load’s size allowed it to travel more quickly, and thereby pass through town too fast to be safely intercepted by a human blockade.

But there was still one more megaload in the immediate queue, and for a third night in a row Missoula activists mobilized. This time we applied lessons learned during the first two nights of protests to execute the round dance plan more smoothly. We were determined to finish strong — and, indeed, this third protest was the most successful yet. About 70 people came out, nearly all of whom were from Indian Peoples Action. It was an age-diverse gathering, including many teenagers and college students, as well as elders and other ages in between.

Having practiced the round dance once, we were able to sustain it longer this time, keeping it going for 12 minutes. Charles Walking Child, an Anishinabe member of Indian Peoples Action, made a short speech afterwards which delayed the load an additional few minutes. Finally, Carol Marsh, this time accompanied by two other Missoula grandmothers, Claudia Brown and Gail Gilman, sat down in the road again until all three were arrested or cited. Only then did the megaload resume its journey.

While the arrest of the grandmothers was certainly important, it should be seen as one piece of a much larger effort that was coordinated mainly by indigenous activists. The arrests were one of several tactics that contributed to the delay of the megaloads. And it’s important to remember, every minute of additional delay is an extra cost for companies that want to reap profits by using this equipment in the climate-destroying tar sands extraction project.

The fact that those who chose to risk arrest were non-Indians is at least partly due to the reality that racism is ingrained in our nation’s justice system. White grandmothers are a lot less likely to be treated harshly by police and courts than are Native American protesters, and the way the megaload protests unfolded reflects this.

Unfortunately, the continuing expansion of the tar sands in Canada means the megaloads that passed through Missoula in January won’t be the last to attempt this route. The good news is Indian Peoples Action is building a base of organized opposition, which includes both Indian and non-Indian activists, but is mainly organized by indigenous groups and individuals. As more people get involved and learn about the tar sands, they are getting even more deeply invested.

“From the planning that began during the first week of December,” Price explained, “through the long wait for the loads to arrive, and then during the actions themselves, many, mostly young, Native American people learned much about the issues facing our planet and became first-time public activists for the Earth. They will be back again and again, in greater and greater numbers.”