© 2022 Truthout
Op-Ed
In the US, Stimulate Demand by Reversing Local Austerity

One question that arises when we talk about the possibility of reversing the disastrous push for austerity runs something like this: “O.K., you say you want more government spending, but what should it spend money on?” The truth is that I think the perceived lack of shovel-ready projects in the United States was overstated even in 2009, but it was a real concern.

The point I want to make is that matters now are actually a lot easier: we could get a fairly big fiscal bang just by resuming aid to state and local governments, which would allow them to reverse the big cuts they have recently made.

So here’s my chart. It shows employment by state and local governments, which has fallen around half a million, with the majority of the cuts coming from education. Moreover, the baseline should not be zero; it should be normal growth, say along with population growth. So I’ve indicated what would have happened to state and local employment if it had grown at its usual rate of 1 percent a year. 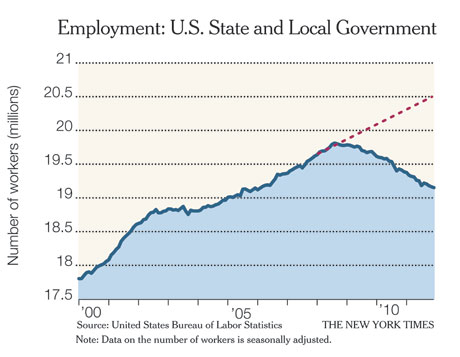 This suggests to me that we could put well over a million people to work directly, and probably around 3 million once you take other effects into account, without any need to come up with new projects; just transfer enough money to state and local governments to let them return to doing the essential business of government, like educating our children.

This isn’t the whole of what we should be doing, by a long shot. But the arguments of anyone who thinks we don’t have good ways to stimulate demand can be refuted with this observation alone.

And by “internal,” I mean in the same paragraph: “This week, President Obama will release a budget that won’t take any meaningful steps toward solving our entitlement crisis,” Mr. Romney said in a statement emailed to reporters on Feb. 13. “The president has failed to offer a single serious idea to save Social Security and is the only president in modern history to cut Medicare benefits for seniors.”

It gets even better when you bear in mind that Mr. Romney has endorsed the Paul Ryan plan, which would abolish Medicare as we know it and replace it with an underfunded voucher scheme.

Has there ever been a candidacy this cynical?