Recently, the Center for Constitutional Rights (CCR) delegation in Haiti visited the Barbancourt II displacement camp in Port-au-Prince. This camp is home to 310 families who lost their homes in the earthquake and have set up tents, tarps and corrugated metal structures with the few possessions they have left on the corner of an industrial company's property. We talked with camp leaders and other residents who told us that the owner has notified them that they will be evicted in a week. This is the latest in what has been a series of threats; last November, the owner showed up with 24 police with guns drawn.

Regardless of what the landowner might like, international law concerning the treatment of internally displaced people does not permit him to effectuate (or the Haitian government to permit) forced evictions of this population. The Inter-American Commission said as much in the precautionary measures it issued to Haiti as a result of a petition CCR worked on with the Institute for Justice and Democracy in Haiti and other Haitian and US human rights partners. But the people of Barbancourt II need help. Now. 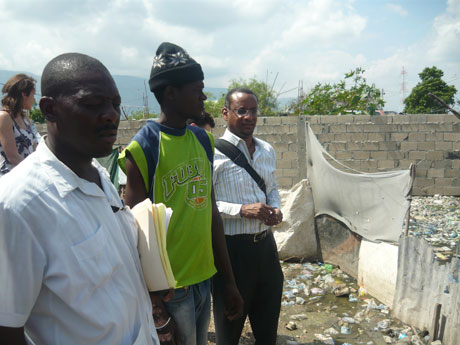 Barbancourt II is not a place that these families want to settle into. To make matters worse, there is a several feet deep, fetid pool of human and other waste that has taken over a large area of the back portion of the camp. Residents told us that the people whose tents abut the pool are breaking out in nasty rashes and constantly fight off disease-carrying mosquitoes. The residents are disgusted that, solely as a result of their displacement, they are being forced to live in such conditions. The camp residents were very clear that they want to move into safe, long-term housing. The problem is that they have no place to go and if they are evicted they will be out on the streets.

The residents told us that they are even more disgusted by the hostility of the landowner and the lack of response from the government officials who are charged with ensuring that they live in a safe environment. Based upon the landowner's zeal to evict these people, one can only deduce that he allows the pool of waste to remain in the camp as a further incentive to get the families to leave. When the residents took matters into their own hands and attempted to dig a drainage ditch to have the water flow into an external waste canal located adjacent to a neighbor's property, they told us that a man on the neighboring property waived a .38-caliber pistol and threatened to shoot any resident who tried to drain the water from the camp. When the residents complained about the pool to the Ministry of the Interior, the entity charged with dealing with these camp issues, they were completely ignored.

So, after we left the camp, the delegation raised the issues facing the Barbancourt II residents with the Ministry of Interior official who's in charge of the camp. Not surprisingly, he denied even hearing of the camp, never mind acknowledging that he received a complaint from the residents. But once we showed him the pictures of the waste pool, he committed to take action. 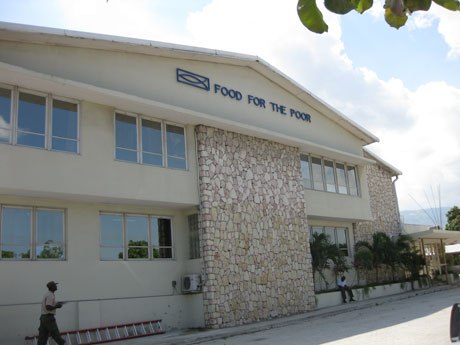 Food for the Poor is a religious charity with a building across the street from the displacement camp in Port-au-Prince. Camp residents received zero food from Food for the Poor.

In many ways, the stakes for Haiti are higher now than they were just after the earthquake. We keep hearing that the international community is pulling its operations out of Haiti. In fact, Barbancourt II told us that the Spanish Red Cross will soon stop delivering water to their camp as their contract has run out. Many of the large NGOs that made themselves indispensable for people's survival failed to properly link up with, help strengthen and build the capacity of the Haitian government. Now, the money is drying up and they are readying to move on to the next disaster zone. 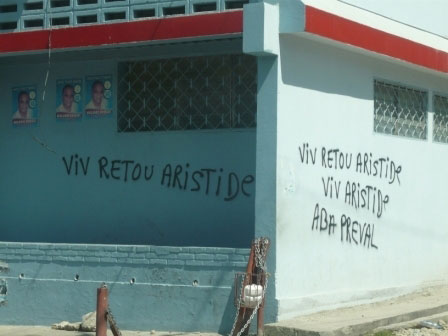 The writing on the wall reads, “Up with Aristide; down with Preval”.

After a year of inaction on any kind of a resettlement plan or reconstruction, the landowners and the Haitian government are anxious to remove displaced persons from private property first and then get around to finding somewhere decent for them to live at some undisclosed date in the future. But that's not what the people in the camps want and it's not what international law allows.

Vince oversees CCR’s groundbreaking litigation and advocacy work, which includes combating the illegal expansion of presidential power and policies such as illegal detention at Guantanamo, rendition, torture and warrantless wiretapping; holding corporations and government officials accountable for human rights abuses; and, challenging racial injustice and mass incarceration. Vince has spearheaded a public campaign, ‘Beyond Guantanamo: Rescue the Constitution,’ coinciding with CCR’s landmark Supreme Court victory in Al Odah v. US and Boumediene v. Bush, which held that the detainees at Guantanamo Bay have a constitutional right to the writ of habeas corpus. Prior to his tenure at CCR, Vince held the position of national senior staff attorney with the American Civil Liberties Union, where he led constitutional and impact litigation to advance civil rights and liberties.

Laura Raymond is an education and outreach associate for CCR.