When the Nuit Debout youth movement erupted in Paris to protest the most significant reform to the country’s labor code in decades, it made headlines both nationally and globally as it was immediately compared to other upsrisings such as Spain’s Indignados and Occupy Wall Street. However, as the movement occupying Paris’ Republic Square approaches its two-month anniversary on Tuesday, it is still struggling to evolve into a more diverse and inclusive movement, as activists say it must do more to involve France’s marginalized communities, especially from the suburbs, who have been struggling against unemployment, police violence and state racism for decades.

teleSUR caught up with two prominent French activists who explained their conflicting thoughts about Nuit Debout’s invitation to join the struggle and the direction of the movement: Nuit Debout could be an opportunity to voice the demands specific to the banlieues, but only under certain conditions, as the two activists of color refuse to be token Black-Arab representatives for a movement criticized for its “whiteness.”

The latter concern was especially expressed by Houria Bouteldja, French-Algerian spokesperson for the Indigenous Party of the Republic, a political party founded a few months before the 2005 Paris suburbs’ riots sparked by the deaths of two unarmed Muslim teens who were accidentally electrified while fleeing police.

According to Bouteldja, Nuit Debout mostly involves “white middle-class youth” who are defending their labor rights under attack by President Francois Hollande’s proposed reform which would make it easier for employers to sack workers. But most people in the banlieues, or suburbs, don’t even have a job — unemployment is up to 40 percent in many French suburbs, which is why Nuit Debout has failed to attract their support.

Bouteldja said the jury is still out about the movement.

“Nuit Debout is a positive initiative, but we won’t sell our souls for a bowl of soup,” she added. “Still, we welcome them to come to our territory.” 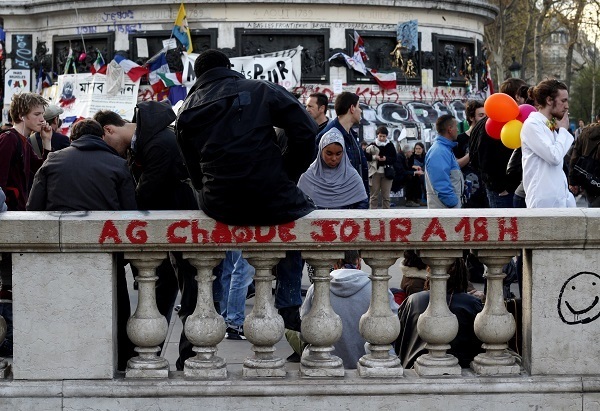 She told teleSUR that one of the main problems in the suburbs was the “public subsidies disease,” a tool used by state institutions, especially at the local level, that essentially offers social leaders tax-funded bribes or local positions in a bid to subdue or undermine broad political uprisings.

As a result, the Indigenous Party has become increasingly reluctant against forming alliances with the traditional left-wing parties, especially the current ruling Socialist Party, which still has regressive views toward Muslims and immigrants, highlighted by support for banning the Muslim veil in public institutions and ongoing refusal to hold police accountable for abuses with these populations.

Earlier in March, a socialist minister compared women who choose to wear the Muslim veil to the Blacks, using the “N-word” to refer to them, who used to support slavery, illustrating yet another example of institutionalized racism in the government, according to the Indigenous Party and other anti-racist associations.

Even if Nuit Debout is a spontaneous movement rejecting any interference from institutionalized parties, Bouteldja’s party still prefers waiting for concrete offers of solidarity and inclusion to these marginalized communities in the future.

On the other hand, Almamy Kanoute, a 36-year-old social worker from the Fresnes suburb and founder of the social justice, anti-racist Emergence citizen movement in 2010, believes the Nuit Debout could blossom into a broader, more inclusive social movement. Kanoute made a remarkable speech less than two weeks after the occupation began which was largely covered in the media, saying he wanted the banlieue to merge with Nuit Debout.

“Mobilization,” he said, should come from people “from all backgrounds, all religions, all origins.”

He told teleSUR that he went to the movement’s Republic Square occupation on his own accord, intrigued by the call for a broader mobilization that would include the demands of the banlieue. 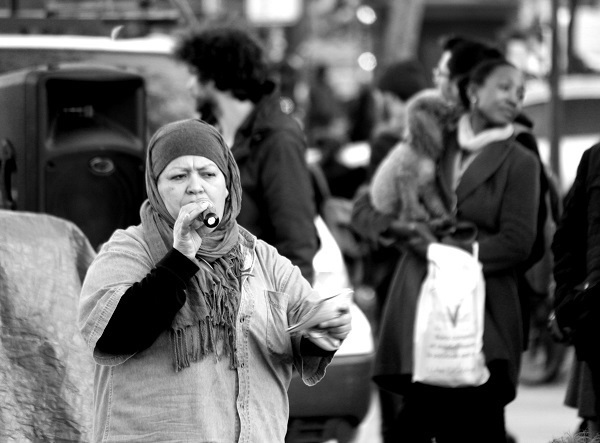 “It’s an opportunity to meet people willing to do politics in a different way, to discuss and express concerns specific to the banlieues,” he said, insisting that the banlieues, or suburban communities, had been mobilized a long time before the youth movement against the labor reform.

He agreed that Nuit Debout members were mostly white and middle class, but believed that with patience, joining forces could eventually pay off and create a political space for a broader range of issues that are ignored by traditional political elites.

However, he warned that even “Banlieue Debout,” launched after Nuit Debout in various suburbs, was not the most effective way to mobilize suburban communities.

“Residents in the banlieues are in a situation of emergency — of unemployment, of eviction from their homes, of daily police brutality, among others, while Nuit Debout consists in long democratic debates,” he commented.

But both Bouteldja and Kanoute agreed that the banlieue were far from being as apolitical and apathetic as the mainstream media has portrayed them, saying that the suburbs have a great political consciousness.

“All they need are new spaces where they can participate themselves in the decision-making process that could create the conditions for a peaceful cohabitation between all French communities,” Kanoute concluded.