Washington – For all its high-tech stealth and record price tag, the F-35 Joint Strike Fighter embodies the droll military motto, “Hurry up and wait.”

Conceived in the heady post-Cold War 1990s, the futuristic fifth-generation jet fighter was to be a technological marvel built in a rush and paid for with “peace dividend” dollars.

But now with the economic crash, the fighter is billions over budget and years behind schedule.

Here's part of the problem: axing the F-35 would eliminate tens of thousands of jobs in 47 states. Few members of Congress are willing to go along. 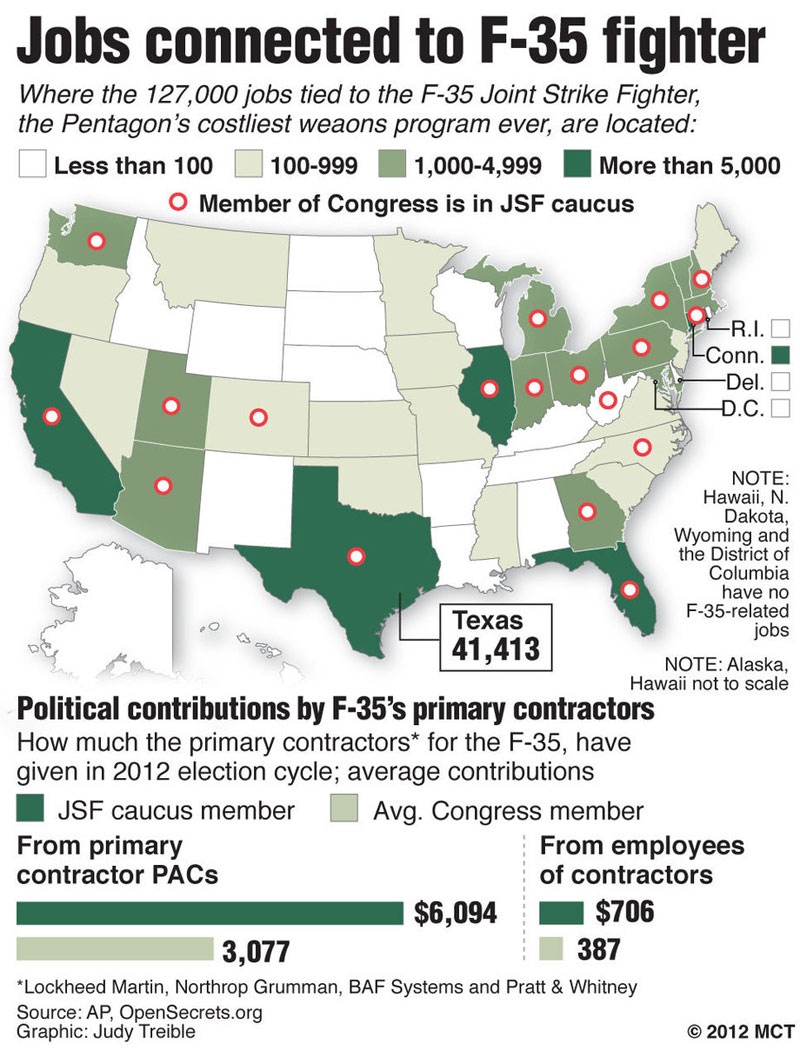 Here's another part: The jet fighter is needed to replace aging U.S. military planes, but — already the most costly weapons system ever, at $385 billion and rising — it might be more expensive than the nation can afford.

Despite criticism from defense secretaries, government investigators and powerful senators, the Pentagon still wants the Joint Strike Fighter — but the Defense Department might want more plane than it needs.

“A lot of times, the Pentagon just wants to sexy these things up and make them do wow stuff when wow is not required,” Sen. Lindsey Graham, a South Carolina Republican who sits on the Senate Armed Services Committee, told McClatchy.

In the current budget crisis, with the Pentagon facing $1 trillion in possible cuts, the F-35's high price tag makes it a prime target. But thanks in part to campaign contributions from its main contractors and their jobs spread across the country, the fighter plane has its own congressional caucus of 48 lawmakers dedicated to saving it at all costs.

When Defense Secretary Leon Panetta announced Jan. 20 that he wouldn't kill the F-35 program outright, there were sighs of relief across the country for subcontractors and parts suppliers that the jet's main manufacturer, Lockheed Martin, has promised will provide 127,000 jobs in 47 states.

Think of the F-35 as the military's version of Medicare: There are huge potential spending cuts, but also powerful constituencies demanding the plane.

The struggle over the Joint Strike Fighter reflects the broader challenge that lawmakers and President Barack Obama face: The biggest budget savings come from large government programs that are popular and, in some cases, needed.

Rep. Norm Dicks, a Washington state Democrat, calls the F-35 jet “the big enchilada,” the most advanced stealth aircraft in the world and a great investment in U.S. national security.

For Republican Sen. John McCain of Arizona, the Joint Strike Fighter is a scandal and a tragedy, beset by delays and huge cost overruns.

Evading radar systems at supersonic speeds, the sleek aircraft would be the first to serve three of the main U.S. military services — the Air Force, the Navy and the Marine Corps — each of which has always had its own special plane.

Panetta's clemency for this futuristic fighter is hardly a new lease on life.

In releasing the Pentagon's budget priorities this month, Panetta restated the Defense Department's commitment to the troubled Joint Strike Fighter while delivering an endorsement that felt more like kissing a second cousin.

“In this budget, we have slowed procurement to complete more testing and allow for development changes before buying in significant quantities,” he said.

“The Joint Strike Fighter is not ready to go into full-rate production,” he told PBS late Thursday.

It was the third slowdown in as many years for the beleaguered program.

Now many of the 6,000 workers at Lockheed Martin's F-35 final assembly plant outside Fort Worth, Texas, will have time on their hands. The state-of-the-art factory, which had expected to be churning out 100 of the jet fighters annually, will be lucky to make 30 this year.

The new slowdown means that most of the jobs Lockheed Martin promised haven't materialized yet in Texas, California, Florida, Illinois and other states that need them in a slow economy.

Most of all, it means that the Pentagon may fall well short of its initial pledge to buy 2,443 of the F-35s; that a dozen allied and other foreign countries eager to buy the plane could end up, combined, owning more of the aircraft than the United States does; that instead of an anticipated hundreds of the jet fighters flying in the U.S. military by now, it probably will be 2016 or beyond before they're deployed.

All this explains why Graham, who backs the program, sounds like a jilted groom describing why he still loves his runaway bride.

“It's probably one of the most mismanaged programs in the Pentagon, but the aircraft is mission essential for our country,” Graham said. “When people say the F-35 is very costly and behind schedule and over budget, they're right. Part of the blame is the military; part of it's the contractor,” a reference to Lockheed Martin.

“But we need the fighter,” he said. “To stop production of the F-35 now after finally getting the kinks worked out would make no sense.”

“Everybody would like to see a low-cost, no-problem development,” Dicks said in an interview. “But there's never been one. We have to do this: The Marine Corp needs stealth, the Air Force needs stealth and the Navy needs stealth. … I think it's going to turn out to be a good airplane. We've got to work hard to get the fixes.”

Lockheed Martin and the F-35's three other primary contractors — Northrop Grumman, BAE Systems and Pratt & Whitney — are using generous campaign contributions to tilt the political field in their favor.

Those four aerospace giants contributed $326,400 to the 48 members of the F-35 caucus last year, according to the Center for Responsive Politics in Washington, a research center that tracks money in politics.

Each member of the caucus received an average amount that's nearly double the average that the companies' political action committees gave to other lawmakers.

Dicks said there was no connection between the $29,500 he got from the contractors and his advocacy of the Joint Strike Fighter.

“I try to call these things on the merits and support the programs that I think that are going to add to the security of the country, he said. “Campaign contributions have nothing to do with it.”

Thomas Donnelly, a defense analyst at the American Enterprise Institute, a research center in Washington, said the F-35 was being built on the fly and funded by lawmakers who — partially because of the project's jobs in their districts — didn't want to kill it but couldn't afford to provide enough money to meet the constantly shifting technological challenges.

“The program plan has changed every year for a decade,” Donnelly said. “We've had to invent it and build it at the same time. So you're going to take some technological risks, but you're going to keep building and fixing. Inventing something that's never been made before is inherently risky.”

It wasn't supposed to be this way.

With the Cold War over, the Joint Strike Fighter was designed to amaze the world and cement the United States' status as the sole remaining superpower. The new plane would ensure that Americans “own the skies” during the stealth dogfights Pentagon planners predicted would dominate the wars of the future.

Just after F-35 design work began in earnest, terrorists attacked the U.S. on Sept. 11, 2001. Then came the wars in Afghanistan and Iraq, which have drained a combined $1 trillion from Pentagon coffers and produced new priorities in the “war on terror.”

With lawmakers scrambling to find deep spending cuts to ease the debt crisis, the rising cost of the Joint Strike Fighter, plus its production and test problems, have made the program a prime target.

“In a nutshell, the JSF program has been both a scandal and a tragedy,” McCain, the 2008 GOP presidential nominee, said last month on the Senate floor.

“We are saddled with a program that has little to show for itself after 10 years and $56 billion in taxpayer investment,” he said.

While McCain stopped short of calling for the program to be axed, his criticism is all the more remarkable since Arizona's Yuma Marine Corps Air Station is slated to get six F-35B squadrons with 88 aircraft.

The specter of the ill-fated F-22 program hangs over the Joint Strike Fighter.

Conceived during the Cold War, the F-22 was designed to combat Soviet planes in a potential Third World War.

But when the Berlin Wall fell and the Soviet Union collapsed, the F-22 became a plane without a mission. The Pentagon purchased only 187 of a planned 750 of the aircraft, and then-Defense Secretary Robert Gates ended the program in 2009.

(Bob Cox of the Fort Worth Star-Telegram in Fort Worth, Texas, and Patrick Donohue of The Island Packet/The Beaufort Gazette in Beaufort, S.C., contributed to this account.)