There is no reason to expect much of a drop in unemployment anytime soon.

The economy added just 80,000 jobs in October, continuing a pattern of weak job growth. Upward revisions to the growth numbers for the prior two months brought the average for the last three months to 114,000, slightly higher than the 90,000 needed to keep pace with the growth of the labor force. At this pace it would take more than 33 years to return to the pre-recession rates of unemployment.

The data in the household survey was slightly more encouraging. While the unemployment rate edged down to 9.0 percent, the employment-to-population ratio (EPOP) increased by 0.1 percentage points to 58.4 percent. This is up from a low of 58.1 percent in July. This is a turn in the right direction; although this figure is still just bringing the EPOP back to its May level. It is still 5.0 percentage points below the pre-recession peaks hit in 2006.

There was also a modest reduction in the share of long-term unemployed, from 44.6 percent to 42.4 percent. Both the average and median duration of unemployment fell as well. In addition, there was a 0.9 percentage point rise in the percentage of the unemployed who had voluntarily quit their job. The 7.8 percent share is the highest since December of 2008. This could be a sign of increased confidence in the labor market, but it may also just be erratic movement in the data. 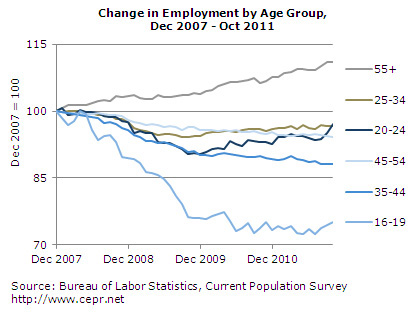 There is little in the establishment survey to suggest any prospect of more rapid employment growth in the near future. The construction sector had added 27,000 jobs in September, but then lost 20,000 last month. Employment in this sector looks basically flat with random fluctuations. The same seems to be the case with manufacturing, which has seen virtually no change in jobs over the last three months.

Retail trade added 17,800 jobs in October, slightly above the 13,300 monthly rate over the last year. However, 10,000 of these jobs were in department stores; this likely reflects earlier-than-usual holiday season hiring. Health care added just 12,000 jobs after adding an average of 36,000 the prior three months. This is likely just an issue of timing.

State and local governments shed another 22,000 jobs, roughly keeping in step with their rate of decline over the last year. Employment services added 14,000 jobs in October, which is certainly not consistent with any employment boom. Similarly, average weekly hours were unchanged at 34.3, the same as for October of 2010.

The average hourly wage increased at a 1.5 percent annual rate for the three months ending in October compared with the prior three months. This indicates some slowing of wage growth from the 1.8 percent rate over the last year, possibly putting wage growth behind inflation.

In sum, there is very little positive news in this report. There is zero evidence in this report of anything to suggest a boost to the labor market is on the horizon. This is consistent with virtually all the other economic data that has been released recently and the Fed's updated projections. While there is little basis for concern about a double dip, absent a eurozone meltdown, the economy is growing just fast enough to keep pace with the growth of the labor market.

Truthout
Share
(Photo: photologue_np / Flickr) There is no reason to expect much of a drop in unemployment anytime soon. The economy added just 80
Politics & Elections