The economy added 217,000 jobs in May, bringing the average over the last three months to 234,000. The unemployment rate was unchanged at 6.3 percent in May. This is due to the fact that the 0.4 percentage point plunge in labor force participation reported for April was not reversed. At 62.8 percent, the labor force participation rate is at its lowest level since March of 1978. 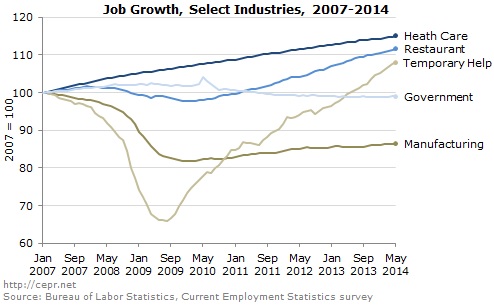 The job gains were concentrated in four industries which accounted for half of total job growth in the month: health care (33,600), restaurants (31,700), social assistance (21,300) and employment services (20,200). The jump in health care seemed to be somewhat of an anomaly. It compares to an average of just 18,000 jobs a month over the last year. There had not been a noticeable uptick since the ACA took effect in January, so this growth will likely be partially reversed in the months ahead. The increase in jobs in social assistance was also an anomaly. The monthly data in this category are often erratic, but it has added just 97,500 jobs over the last year.

Government employment edged up by 1,000 in the month as growth at the local level offset declines at both the federal and state level. Over the last year employment at the federal level (not including postal workers) is down by 61,300, continuing a decline that began in 2011. Construction added just 6,000 jobs in May after gains averaging 30,500 the last four months. This is likely just an issue of timing, with moderate job growth likely to continue in the sector. Manufacturing added 10,000 jobs, roughly the same as its average over the last year.

Coal mining lost 300 jobs in May. Employment in the industry has been essentially flat at around 78,000 for the last year, but it is down more than 10 percent from its level of two years ago. The motion picture industry lost 9,200 jobs in May. Monthly numbers in the sector are erratic, but employment has been sharply lower in the last year. Employment is down by 21.2 percent from its pre-recession level. In percentage terms, that is larger than the falloff in manufacturing employment.

With the May data, the index of aggregate hours in the private sector finally passed its pre-recession peak, hitting 100.6 compared to a peak of 100.4 in March of 2008. The average hourly wage has risen at a 1.9 percent annual rate over the last three months, virtually the same as its rate of increase over the last year.

The picture was generally positive on the household side. The number of people working part-time involuntarily fell by 196,000 and now stands 648,000 below its year-ago level. The percent of workers who are unemployed due to the fact that they voluntarily quit their jobs jumped to 8.9 percent, the highest level since October of 2008. The percentage of long-term unemployment in the total fell by another 0.7 percentage points to 34.6 percent, down 2.8 percentage points from the year-ago level. This drop is attributable in part to the shortening of the benefit duration as people have given up looking for work.

On the whole, this report continues to show a mostly positive picture of the labor market with the economy adding jobs at a considerably more rapid pace than it had earlier in the recovery. However it is hard not to be bothered by the inconsistency between the labor market picture and the overall growth data. This inconsistency led to the 3.2 percent plunge in productivity reported for the first quarter. Clearly that figure was depressed by the weather and inventory fluctuations, but a labor market adding 230,000 jobs a month is inconsistent with an economy growing at 2.0-2.5 percent annual rate. These numbers will come into line over time. The ACA appears to be allowing workers to opt for part-time jobs and older workers to retire early.