Groups of Chilean activists living in Australia are mounting a campaign for the extradition of an alleged torturer: former Dirección de Intelligencia Nacional (DINA) agent Adriana Rivas. Rivas is wanted by the Chilean courts in connection with the disappearance of Partido Comunista and Movimiento de Izquierda Revolucionario (MIR) militants. The former agent has been living in Sydney for 36 years, despite knowledge of her participation in the crimes committed at the Chilean torture and extermination center known as Cuartel Simon Bolivar – the place where no one got out alive.

Lucho Riquelme, a Chilean activist who had to escape Chile due to persecution by the Central Nacional de Informaciones (CNI) in the mid-1980s, now lives in Melbourne. Riquelme, who is the coordinator of the Latin American Solidarity Network, describes the intensity of the Extradite Adriana Rivas campaign as part of a wider struggle for justice against oblivion.

In a television interview in 1995, former Chilean dictator Augusto Pinochet stated, “The only way to solve problems is olvido (oblivion). If day after day we are always returning to the same point, we will continue fighting. Forget it, do not talk more about the issue, then you will forget and I will forget.” Emphasizing the attribute of “forgetting” became a widespread phenomenon that allowed the right wing in Chile to retain the memory of the dictatorship as “salvation” from alleged Marxist ruin. However, opponents of the dictatorship countered oblivion by reinforcing remembrance of torture, murder and disappearances as a vital component in the struggle for justice. 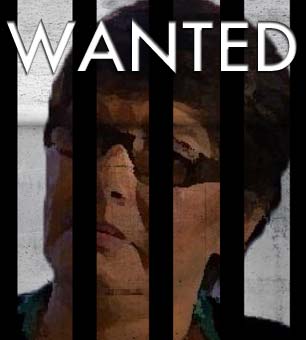 Alleged torturer: former DINA agent Adriana Rivas. (Image: Eileena Long / Truthout)The history of Cuartel Simon Bolivar remained a heavily guarded dictatorship secret until recent years, when Jorgelino Vergara Bravo, a former errand boy and servant who was later included in DINA, provided testimony about the torture and extermination center, describing it as”the only place where no one got out alive.” Favored methods of torture and extermination included excessive beatings, electric shocks to sensitive body parts, sexual torture, asphyxiation, the use of sarin gas, and cyanide injection.In addition to providing detailed descriptions of torture and disappearance (such as the burning of bodies in drums to annihilate possibilities of recognition), Vergara’s testimony has been instrumental in identifying DINA agents who participated in the torture and extermination. This testimony led, ultimately, to the indictment of Adriana Rivas – former secretary – and later, a DINA agent – of Manuel Contreras, then head of DINA.

Despite Rivas’s insistence that her role entailed secretarial duties only, Vergara’s testimony has placed Rivas as an interrogator and torturer. In an interview conducted by ABC News, Vergara claims Rivas participated in the interrogation of Fernando Ortiz. “Generally, when Adriana Rivas participated in the torture of detainees, she beat them with sticks; she kicked them, punched them and also applied an electric current to the political prisoners.”

Rivas, who has been living in Australia since 1978, is wanted by the Chilean courts in relation to the kidnapping and disappearance of seven militants: Fernando Ortiz, Victor Diaz, Fernando Navarro, Lincoyan Berrios, Horacio Cepeda, Hector Veliz and Reinalda Pereira, all victims of a clandestine operation known as Calle Conferencia. The indictment for the crimes occurred in 2006 when Rivas briefly visited Chile. She subsequently absconded from Chile while on bail and returned to Australia via Argentina.

The Extradite Adriana Rivas campaign started in late 2013, when Australia’s Special Broadcasting Service (SBS) aired an interview with the former DINA agent. “The documentary had a great impact,” Riquelme told Truthout. “We did not understand how she managed to live in Australia [from] 1978 to 1979, considering she was a member of the repressive front of the Pinochet dictatorship.”

The campaign’s first protest was organized in response to Rivas’s appearance on ABC News in May, and according to Riquelme, the group is calling for May 24 to be observed as “a national day of action denouncing and asking for the extradition of Adriana Rivas.” They’re circulating an online petition to this effect.

The SBS interview revealed a callous personality thriving upon delusions of grandeur and prestige, as well as adulation for Contreras, whom Rivas describes as “an excellent person” who has come under unjust condemnation. During the course of the interview, Rivas also defended the use of torture. “Everyone knew they had to do that to the people in order to break them because communists would not talk,” she said. “It was necessary. The same as the Nazis did, you understand? . . . This is the only way to break people.” Furthermore, Rivas recalled her stint in DINA as a memorable experience that provided an avenue into another, coveted world. “Do you believe I would have had the opportunity to go to embassies in Chile, or ride in a limo, to and fro . . . visit the best hotels in Chile?”

Riquelme explains that fragmentation of memory may hinder the possibility of a united front on the Rivas case, which has a far deeper impact than the immediate aim of extradition:

The campaign first attracted the attention of people who were knowledgeable about the subject; gradually local people started involving themselves. We must understand that the majority of Chileans in Australia are not here for political reasons; those who know about the dictatorship or were involved in ‘Solidarity in Chile’ in the past are a minority, divided into small groups and some of them are not doing anything at all. The Extradite Adriana Rivas campaign is alerting lots of people and reviving the old political divisions. We are also supporting the Mapuche indigenous people and popular organizations that are building movements for change. We are not involved in all the political left parties, some of whom are involved in the Bachelet neoliberal government.

The divergent views of those affiliated with the Chilean left have led to various campaigns igniting and diverting attention from the main focus of the campaign which started in December 2013. Riquelme states that people linked to the Concertación government, have urged activists not to mobilize for alleged fear of damaging the extradition process. The Concertación government, a coalition of center-left parties instrumental in the downfall of Pinochet in the plebiscite of 1988 which initiated the democratic transition, embarked upon creating the frameworks to investigate human rights violations pertaining to the dictatorship era. However, criticism has been leveled at the government, including that of current president Michelle Bachelet, for adhering to dictatorship laws pertaining to areas such as education and the Mapuche indigenous resistance. “This froze people’s participation in the beginning,” Riquelme said. “When the campaign started gaining momentum and generating impact within the community, these people, affiliated with the Concertación government, created a new group defined as a national campaign for Chile and are now also calling for the extradition.”

While the campaign can always use more people calling for extradition, Riquelme worries that the political rifts will hinder the ultimate goal. He is also concerned that members of the new group want to exploit the extradition campaign for political gains. Riquelme insists it is important for the original campaign to stay independent. “Adriana Rivas and DINA repressed the entire Chilean population involved in the struggle against dictatorship,” he said. “We identify ourselves with the slogan ‘Arriba [email protected] Que Luchan,’ supporting grassroots groups in the struggle against injustices committed in Chile – organizations that are fighting against neoliberalism.”

Meanwhile, the movement is not lost on Australian lawmakers. Labor MP Laurie Ferguson, who participated in the Sydney rallies clamoring for Rivas’s extradition, succinctly summarized the impunity exhibited by Rivas, and the importance of investigating extradition processes, in a statement granted exclusively for this article:

My support for social democracy, knowledge of the US-sponsored violent overthrow of the Allende government and my continuing contact with Chilean Australians has led me to take a particular interest in the continued residence here of alleged torturer Adriana Rivas. I am unclear as to which migration category facilitated her entry. If it was refugee/humanitarian, she would have had to mislead our authorities, and the allegations are accurate. Additionally, her media performances where she defended torture because the “Nazis” and “everybody” did it and “you have to break people,” plus her assurance that all was well because she drove around in limousines and went to the best hotels are deeply disturbing. Obviously, extradition is a serious matter and the Government must give it studied consideration, but one would think she is a very suitable candidate for extradition.

Forthcoming plans for the campaign include further demands that the Australian government reveal the process through which Rivas was granted safe haven in Australia. “We met federal officials on June 4 in Canberrra, as part of our plan to have the petition presented to the Australian government. A number of us were present in the House of Representatives and the Senate campaigning to extradite Adriana Rivas to Chile.” 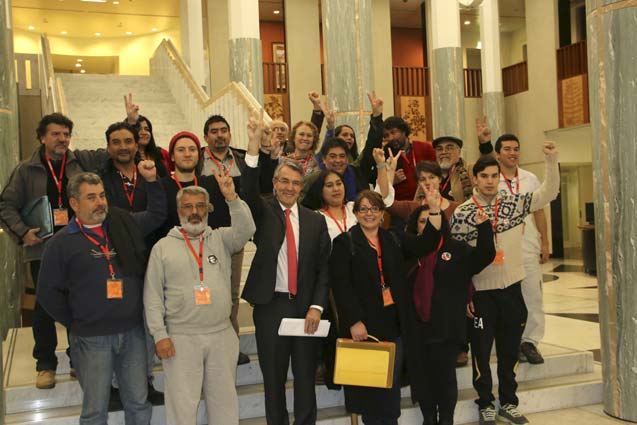 At the Federal Parliament with the Hon Mark Dreyfuss, during the presentation of the petition. (Photo: Chile Solidarity National Coalition)

In addition to attention from lawmakers like Ferguson, the Extradite Adriana Rivas campaign has garnered the attention of a number of political figures, as well as leaders of trade unions and socialist groups. The Honorable Mark Dreyfus, shadow attorney general and shadow minister for the arts, presented the petition to the House of Representatives of the Australian Parliament on June 4, 2014. In his speech, Dreyfus, who has close ties to Chile, noted that the presence of former torturers in Australia stands in contradiction with the Hawke’s government’s signing and ratifying of the international convention against torture in 1985 and 1989, as well as the Labor government’s signing of the optional protocol to the convention against torture in 2009.

On the same day the petition was presented, members of the movement protested in front of the Chilean embassy because the Bachelet government had appointed James Sinclair, a former CNI agent, as the new Chilean ambassador in Australia. The appointment reinforces this strange governmental compromise that accommodates both memory and the dictatorship strategy of oblivion – a contradiction enhanced by the fact that Bachelet, herself a victim of dictatorship violence, has collaborated to grant further impunity.

“We hope many people will join us,” Riquelme said, in closing. “This is an outrage; we cannot allow this kind of situation to proceed. We have our memory; we don’t forget and we don’t forgive.”

Share
Copyright, Truthout. May not be reprinted without permission.
Ramona Wadi

Ramona Wadi is an independent researcher, freelance journalist, book reviewer and blogger specializing in the struggle for memory in Chile and Palestine, Latin American political thought and anti-imperialist struggle.