2009 was a year of accelerating economic pain and loss, according to US Census data released today. Although the National Bureau of Economic Research (NBER) tells us that the “Great Recession” officially ended in December of 2009, the labor force of the US shrank by more than 130,000 from 2008 to 2009. The median family income – a better measure than average income because it reflects the exact middle of income distribution – decreased by $2,254 or 3.5 percent. The median income for all workers in the US fell from $29,868 in 2008 to $28,365 in 2009 – a 5 percent decline.

Are you still surprised by anger at the polls? Might these numbers explain the seeming willingness of voters to try anything that looks different? Rising inequality, falling incomes and increasing poverty are very pronounced. When the data comes in next year for 2010, it is likely to show us that the period from 2008 through 2010 witnessed a historic increase in poverty and inequality in the US. Our massive budget deficits have been directed in ways that lower poverty, increase employment or reduce inequality. Surely, these numbers would have been worse absent many programs. That is true and valid. However, it is way too hard out there to be smug about how much worse it could have been. Yes, it could be worse. Yes, it is getting worse.

Below follows a sketch of just how bad it is- from a poverty perspective. All graphs in this article are based on the recently released census data. 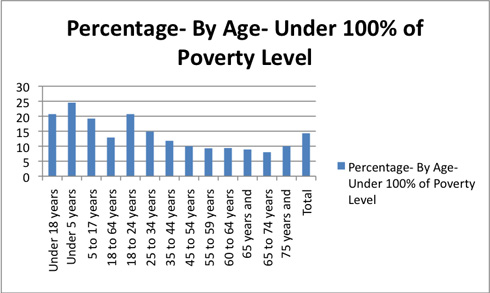 It is clear that the younger you are in America, the more likely you are to live in poverty. Young Americans are nearly twice as likely to be poor as older Americans. The bar graph demonstrates this trend for African-Americans. 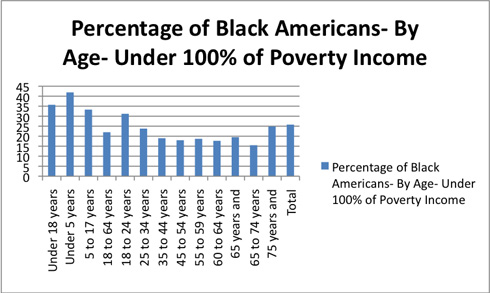 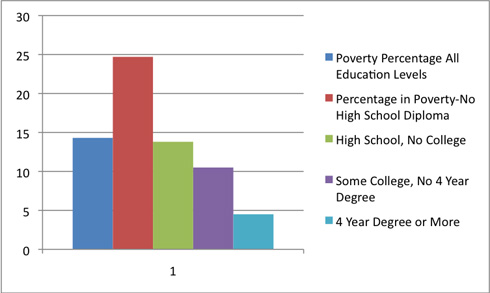