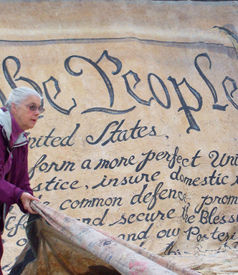 Undue corporate influence over U.S. elections has been a serious problem in American politics for decades, but this year’s Supreme Court ruling in Citizens United v. Federal Election Commission made things worse. Worst of all, we may never know the extent of the damage.

Citizens United freed corporations to spend unlimited amounts of money backing specific political candidates, and without congressional action, those expenditures can be completely anonymous. Major corporations are already capitalizing on the new legal landscape by the millions, and the public doesn’t really know who is buying what influence or why.

That’s why The Media Consortium will be carefully watching the effects of this ruling in the run up to this year’s midterm elections. Every day through Nov. 4, we’ll bring you some of the best independent reporting on the effects of corporate spending in an attempt to measure just how widespread the effect of Citizens United will be on this—and the next—election. Keep your eye on “Campaign Cash” as we follow this issue in the coming weeks. If you want to tweet about it, use the hashtag #campaigncash.

The Impact of Citizens United

As Harvard University Law School Professor Lawrence Lessig explains in an interview with The Nation’s Christopher Hayes, the Citizens United v. FEC decision represents one of many ways that corporations buy political favors.

Prior to the ruling, companies couldn’t spend money to directly advocate the election of a particular political candidate during election season. They could form Political Action Committees (PACs) to support or attack specific candidates, but those PACs had to be funded by individuals who worked for the company and couldn’t be funded from the corporation’s treasury directly. The executives of Goldman Sachs, for instance, could band together to form GoldmanPAC and spend their money on whatever candidates they wished—and many corporate employees exercised that right and spent freely on elections through their corporate PACs.

Now corporations can spend as much as they want and actual corporate funds—not just organized individuals—can also be deployed, making massive amounts of corporate cash eligible for political purchasing.

But the scariest part of Citizens United, as Lessig emphasizes, is the money that isn’t spent. That is, if a firm makes it known that they are willing spend millions of dollars to fight any politician who opposes them on a particular policy issue, representatives and senators might begin changing their voting behavior in Congress before the company actually has to put up the cash.

And ultimately, Citizens United didn’t just legalize unlimited corporate expenses on elections. It also allows those expenses to be anonymous. If companies launder their political cash through a front group, that third-party spender doesn’t have to disclose who its donors are.

This Isn’t Your Local Chamber of Commerce

As Harry Hanbury details for GRITtv, this laundering scheme is essentially the business model for the U.S. Chamber of Commerce– a lobbying powerhouse in the nation’s capital. Don’t be fooled by its name—the U.S. Chamber has almost nothing to do with the local small business coalitions who help strengthen local economies.

As Hanbury notes, 40 percent of the U.S. Chamber’s 2008 funding came from just 26 corporations. The group represents many of the nation’s largest and most irresponsible corporations, from those responsible for the financial meltdown on Wall Street to BP, the company that spilled millions of barrels worth of oil in the Gulf this summer. The Chamber’s branding allows them to disguise their political as a coalition of local businesses while it does dirty work for corporate titans.

When BP was publicly promising to do everything in its power to fix the massive oil disaster it created in the Gulf of Mexico, it was also funneling money to the U.S. Chamber of Commerce. And what was the Chamber up to? It was lobbying furiously to protect BP from new rules that would force the company to pay for oil disaster clean-up. The Wall Street banks did the same thing as financial reform legislation moved through Congress, and companies never have to disclose these expenditures to the public.

So it’s no surprise that the Chamber responded to Citizens United by immediately announcing a 40 percent boost in its political spending operations. So much corporate money then flowed into the Chamber that the group chose to boost this budget again by 50 percent, allocating $75 million for its 2010 war chest. So far, the Chamber’s ads have favored Republican’s 93 percent of the time. No entity spends more on politics than the Chamber—not even the political parties themselves.

But while the future of corporate spending in campaigns looks bleak after Citizens United, corporations are still barred from contributing directly to political campaigns. A company might take out a television ad attacking Rep. Alan Grayson (D-FL), but it can’t make unlimited contributions directly to Grayson’s challenger, Republican Dan Webster.

Nevertheless, corporate employees and company PACs have already been spending lavishly on elections for decades. In a feature for Mother Jones, Dave Gilson compiles the 75 biggest political spenders, both companies and trade groups, from 1989 through 2010, and breaks them down by industry. Goldman Sachs, Citigroup, JPMorgan Chase, and Morgan Stanley are all among the top 20 most extravagant political spenders—but the American Bankers Association, a trade group that all four belong to, is also in the top 10. If you’re wondering how Wall Street was able to secure its massive taxpayer bailout in the face of widespread voter outrage, this is your answer.

To soften the Citizens United blow, Congress has been debating the Democracy is Strengthened by Casting Light on Spending in Elections (DISCLOSE) Act, which would require companies to disclose all of their political expenditures as well as requiring front-groups like the Chamber to list the identities and amounts of its donors. The bill, sponsored by Rep. Christopher Van Hollen (D-MD) and Sen. Russ Feingold (D-WI), cleared the House this summer but was stymied by a Republican filibuster in the Senate.

Undoing the damage dealt by Citizens United through something like the DISCLOSE Act will help, but it won’t make our democracy totally safe from corporate abuse. As Lessig notes, the day before the decision was handed down, U.S. election financing was already encouraging rampant corruption and in need of serious reform.

Lessig suggests banning political expenditures by corporations altogether, and placing a hard cap on the amount that individuals can contribute. By limiting individual donations to $100, the ability of corporate PACs to funnel cash into the political process would be thwarted.