Longtime military watchdog and Truthout editor Dina Rasor paints a well-informed picture of what might be motivating the 359 retired senior military officers endorsing the GOP presidential candidate, and asks: if we continue to allow them and their peers to throw their rank around in the political arena, what message does that send to more junior members of the military, not to mention the public?

On October 17, Mitt Romney’s campaign announced that he had received the endorsement of 359 retired generals and admirals in the form of a “military advisory council,” thus furthering the corruption of former military members through politics and defense money. There may be many personal reasons that these retired military would want to endorse Mr. Romney – based on my past 30 years’ experience investigating the military, I can think of a few reasons.

Mr. Romney has promised to shoot the defense budget into the stratosphere at levels that have been unseen since the height of the Korean War. As in a past column, I have inserted here a chart that I think is one of the most significant of the presidential campaign, and it should be passed around to as many people possible before the election. 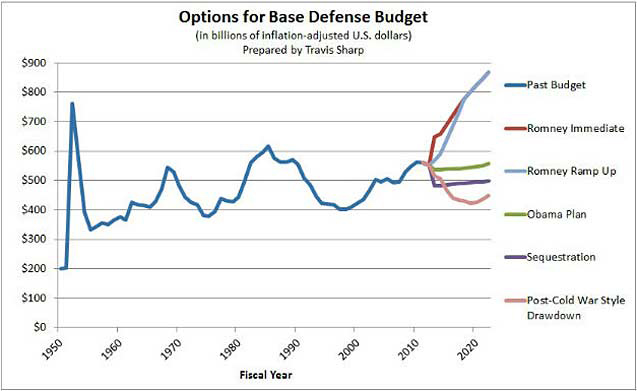 According to most sources, Romney wants to raise the defense budget to $2 trillion above what the military has asked for and what Obama plans to spend in the next decade. The Romney campaign, in a defense spending Etch a Sketch moment, has partially walked back this figure slightly, saying that it might not make it that much until a second term, which would still put it at a mind-boggling $1.75 trillion.

In the presidential debate on October 22, President Obama tried to pin down what Romney wanted to spend money on – and then ridiculed him when Romney mentioned weapons that were suited for the cold war era rather than to the newest threats to our national security.

Did these 359 generals and admirals throw in their lot with Romney because they thought that this money could be spent wisely and was absolutely necessary to defend our country? I cannot read the minds of these top officers but, based on years of revolving door practices and other types of abuses, maybe many of these officers were motivated by the fact that they had lucrative post-retirement jobs with defense contractors who promise to become even more flush with money if a budget of this size passes. The lure of money for the revolving door might have clouded their judgment.

As I wrote in a past column, it was considered unseemly and unethical for generals after World War II to take a job at a defense contractor after they retired. It is now commonplace. Take a look at some of the generals on Romney’s list and their post-retirement employment, as compiled by boldprogressives.org:

Patrick D. Moneymaker, 64, has served as a director of Kforce since July 2008. Currently a consultant, he previously served as president and CEO of Proxy Aviation Systems from July 2008 to August 2010. He served as the CEO of Kforce Government Holdings, Inc. (“KGH”), a wholly-owned subsidiary of Kforce Inc., from September 2006 to July 2008, and also served as a director of Kforce from June 2005 to September 2006. Prior to his role as CEO of KGH, Mr. Moneymaker served as the CEO, operating officer and president of Ocean Systems Engineering Corporation (“OSEC”), a privately held company, from October 1998 until OSEC’s sale in May 2006.

General Kelley went to work for one of the largest Washington lobbyist firms, Cassidy and Associates, helping defense companies get their piece of the Pentagon’s budget pie.

Perhaps some of the resentment against President Obama was that he was one of only a few president sin history who refused to get rolled by the generals and asserted civilian control after years of President George W. Bush going along with most of what his generals told him to do. Some of the top military showed open contempt for President Obama when the young president took office, similar to the hazing a young President Kennedy received.

As I wrote in a past column on military versus civilian control:

From accounts in [Rolling Stone reporter Michael] Hastings’ book and other news accounts, the top generals didn’t have much respect for Obama when he first came into office. What probably made that situation worse was that they were so used to President George W. Bush’s rubber stamp of what they wanted in the war, once the war started. (Secretary of Defense Donald Rumsfeld pushed back hard and severely before the Iraq war when some generals were concerned that we didn’t have enough troops and no exit strategy. But once we were in the war, Bush claimed that he was going to listen to the generals on the ground.)

In the end, the generals underestimated Obama’s civilian resolve, which was hardened like Kennedy’s when he saw that they were trying to undercut and go around his authority. Jonathan Alter’s book, “The Promise,” illustrates Obama’s first round of attempted hazing by the military brass. Hastings describes in his book the contempt that the top generals had when Obama said that he was going to honor the troop withdrawal agreement with Iraq and have troops leave at the end of 2011. (There is plenty of controversy surrounding the State Department’s 5,000-person army of hired mercenaries, but they are small compared to the troops that Obama pulled out.) The generals and some hawks in the administration leaked like crazy to the press that this was a “soft” date and insisted on the caveat that it depended on the old phrase of “the situation on the ground,” as the date neared.

But Obama prevailed despite the leaks, most likely helped by his firing of McChrystal and overruling his generals on the Bin Laden raid by insisting that there were backup helicopters.

How to Fix This

In a past column, I made a bold suggestion about what generals should be required to do to stop the insidious corruption of our top officers from going through the revolving door to lucrative defense company jobs and disillusioning our junior officers:

So, my reform solution for the general officer corps requires them to make a choice. If they want to go work for or invest money in a defense contractor, they must give up their title of general and lose their military retirement pay and perks. If they think it is unfair because they earned the retirement and the military rank, they can keep to a higher calling and work in some other civilian industry, as many generals did after World War II. (See my January article on the corruption of the general officer corps.) If the generals still want to work on military issues and strategy, they can go work for one of the myriad of nonprofit organizations that look at military issues or oversight, as long as they strictly stay away from any lobbying efforts with the DoD or the Congress. They also cannot go work for a nonprofit organization that accepts contributions from defense contractors unless they give up their rank and pensions. They should also not be allowed to fill a civilian political office in the DoD because of the necessary authority of civilian rule and they are still considered military. These rules would not be subject to any type of executive or Congressional waivers.

Now we have 359 retired generals and admirals corrupting our political process by using their rank instead of just their name to endorse a political candidate. Romney uses a fig leaf to pretend that people will understand that these are retired military by saying at the bottom of the list of his “military advisory council”:

“Use of Military Branch and/or Rank does not imply endorsement by the service branch or the Dept. of Defense”

If that phrase was really true, why put their rank down at all? I am not the only one concerned with what this mixing of rank and politics might do. According to the Army Times:

The Chairman of the Joint Chiefs, Army Gen. Martin Dempsey, has repeatedly urged retired officers to stay out of the political fray.

“Former and retired service members, especially generals and admirals, are connected to the military service for life,” Dempsey wrote on a Pentagon website in June. “When the title or uniform is used for partisan purposes, it can erode the trust relationship. We must all be conscious of this, or we risk adversely affecting the very profession to which we dedicated most of our adult life.”

General Dempsey might have sincere sentiments, but his statement will clearly not stop this problem, and the Romney campaign has just increased the problem 359 more times. This is such a serious breach of ethics by these former retired brass that I would suggest the same bold requirements be applied to them, if they wish to endorse a political candidate, as I suggested for retired military officers who want to go work in and profit from the defense industry.

Congress should pass a law that if top military officers want to endorse a political candidate for federal office, they must also give up their rank, their retirement pay and their military perks. It would not work to just forbid these officers to use their rank in the endorsement, because the media would pick up that they were retired military officers and report it. If retired officers feel so strongly that they must, as any civilian citizen may, publicly endorse a federal candidate, they must also have the honor to give up their title, pay and perks in order to avoid damaging the military institution they served.

Unless we stop this slide of our top military personnel into areas that corrupt the institution, our junior officer corps will become cynical and jaded, and the best officers will leave before they ever reach the top military level. Presidential campaigns should not encourage this behavior, and the Romney campaign just pushed the limit much farther – 359 times.

Share
Copyright, Truthout. May not be reprinted without permission.
Dina Rasor