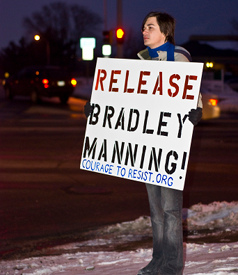 As the U.N. “special rapporteur on torture” begins to probe whether the brutal solitary confinement of Bradley Manning constitutes torture, the imprisoned “leaker” spoke to David House, one of the few people allowed to visit him.

House, who has been very concerned about Manning’s “deteriorating physical and mental well-being” wrote on Firedoglake about the conditions under which Manning has been placed, offering strong first-person evidence against the Pentagon’s positive spin.

It’s a long and detailed post that deserves to be read in full, but some of the key findings include Manning laughing at the idea that he gets ample time to watch the news and exercise, and revealing the drudgery and discomfort of his daily life. Here are House’s words.

On the availability of news:

Manning told me explicitly on December 18 2010 that he is not, nor has he ever been, allowed newspapers while in confinement. When I said “The Pentagon has stated that you are allowed newspapers”, his immediate reaction was surprised laughter.

On having time for exercise and recreation:

Manning stated to me on December 18 2010 that he has not been outside or into the brig yard for either recreation nor exercise in four full weeks. He related that visits to the outdoors have been infrequent and sporadic for the past several months.

Manning related to me on December 18 2010 that he does not receive any substantive exercise and cannot perform even basic exercises in his cell. When told of the Pentagon’s statement that he did indeed receive exercise, Manning’s reply was that he is able to exercise insofar as walking in chains is a form of exercise.

On the conditions of his bedding.

Manning related to me on December 19 2010 that his blankets are similar in weight and heft to lead aprons used in X-ray laboratories, and similar in texture to coarse and stiff carpet. He stated explicitly that the blankets are not soft in the least and expressed concern that he had to lie very still at night to avoid receiving carpet burns. The problem of carpet burns was exacerbated, he related, by the stipulation that he must sleep only in his boxer shorts as part of the longstanding POI order. Manning also stated on December 19 2010 that hallway-mounted lights shine through his window at night. This constant illumination is consistent with reports from attorney David Coombs’ blog that marines must visually inspect Manning as he sleeps.

The momentum to get better conditions for Manning is growing, thanks to the efforts of Glenn Greenwald and other media outlets.

Firedoglake has an action page for concerned citizens.