New Orleans — Parades and street parties are underway and Mardi Gras is fast approaching in the iconic French Quarter. Various shades of nudity are a common sight on the neighborhood’s legendary Bourbon Street, both inside and out of the adult clubs in the Quarter’s upper end. These clubs are part of a long and celebrated tradition of sex work in New Orleans, and dancers say they are among the safest and most well-paying clubs in the country. However, two law enforcement raids over the past week temporarily shut down eight French Quarter clubs, robbing dancers and club workers of thousands of dollars in income during the city’s busiest tourist season. Several clubs may close permanently as a result.

Dancers at some clubs told supporters and reporters that police verbally harassed and dehumanized them during the raids, including photographing them in sparse work attire without consent. Club dancers and entertainers quickly organized and fought back, holding a protest in the French Quarter on Wednesday that drowned out a press conference held by local tourism officials to assure revelers that Mardi Gras would still come to Bourbon despite ongoing construction projects.

“There are people in this city who feel that young women should not have lucrative employment,” said Lyn Archer, a self-described stripper and organizer with Bourbon Alliance of Responsible Entertainers (BARE) who spoke at the rally. “The minimum wage in Louisiana is $7 and something an hour … I haven’t made that little money since I was 14 years old teaching children how to swim at the public pool.”

Local police and the state vice squad worked in tandem on the raids, which top cops have characterized as part of an effort to combat human trafficking in New Orleans. However, sex-work activists were quick to point out that the raids — along with another series of raids in 2015 — have yet to uncover a single incidence of sex trafficking. (Human trafficking occurs when people are abducted, forced or coerced into labor.)

Investigations are ongoing, but with no evidence of trafficking, the police cited the clubs for prostitution because some dancers allegedly broke rules around exposure and physical contact with clients. The police also cited a few clubs for allowing drug sales on their premises, although drugs are common in an area that hosts thousands of partiers every day.

“We are being criminalized,” Archer said. “Our clubs are being issued citations for what is, in fact, the same activities that are going on directly outside the club [on Bourbon street] — flashing, flirting, touching, talking.” 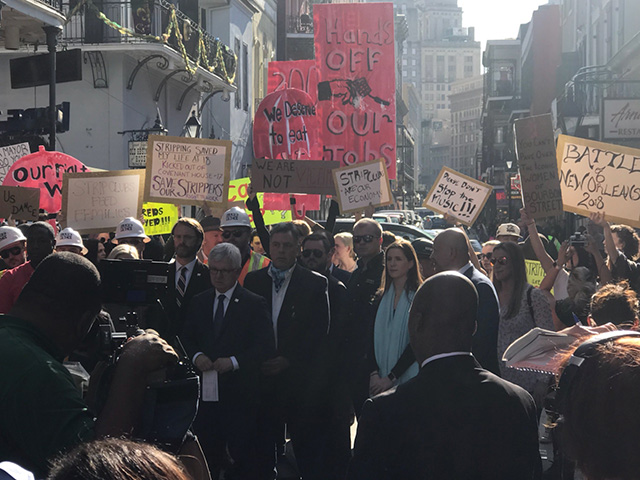 Protesting strippers and sex-work activists disrupt a press conference held by city tourism officials in the French Quarter of New Orleans on Wednesday. The city is considering new zoning rules that could limit the number of strip clubs in the iconic French quarter, which has a long and storied history of sex work. (Photo courtesy of BARE)

Archer said that stripping is a type of sex work, and sex work should not be a crime. Sex work and human trafficking are, by definition, very different things. As journalist Melissa Gira Grant points out at In Justice Today, the New Orleans police and the vice squad seemed to be confused about the distinction during a press conference as they attempted to justify a campaign that has put a large number of French Quarter workers out of jobs. The vice squad captain and local police chief used two different definitions of the crime they are supposedly after:

Of the arrests, [Louisiana Alcohol and Tobacco Control] Commissioner Juana Marine-Lombard said, “Prostitution in and of itself is sex trafficking.” But trafficking, as it is defined by the state of Louisiana and under federal law, requires force, fraud, and coercion; prostitution does not. In the same press conference, New Orleans Police Department Superintendent Michael Harrison admitted that he does not believe prostitution and sex trafficking “are one and the same.”

Many sex workers engage in prostitution of their own volition and on their own terms. As Truthout has reported, conflating sex work with human trafficking is dangerous for both sex workers and human trafficking victims. Efforts to “rescue” victims of sex trafficking often result in arrests of consenting adult sex workers, and often compromise spaces where they find work, including well-regulated clubs and websites sex workers use to find and screen clients from the safety of their homes. This forces sex workers into riskier environments where they are more likely to fall into the hands of abusive traffickers. Moreover, sex workers are the people who are often best positioned to report sex trafficking in the first place, and their criminalization makes it less likely that trafficking will be exposed and eradicated when it does occur.

Speaking at the rally on Wednesday, a dancer going by the name of Vanessa said she has worked as a stripper for years in clubs across the country. She said the only “trafficking” she has seen in New Orleans has been the result of policies enforced by the police and city government.

“When you see the results of the injustice and discrimination the city has put on us, when you see entertainers not feeling safe or secure at work because of the city, when you see women traveling out of the city or across state lines to find work options that might not be as clean or as safe or legal as the ones of Bourbon Street, what you are seeing is young women being coerced by the city’s actions to put themselves in dangerous situations,” Vanessa said.

The raids are part of a multi-year crackdown on strip clubs in New Orleans, driven in part by sensational media coverage, conservative anti-trafficking organizations that work with law enforcement and a religious group that runs a youth shelter outside the French Quarter. Sex work is a topic of debate, but local activists see larger forces at play in a city that has experienced rapid gentrification in recent years. As a press release from BARE points out, next week city planners will hold a public hearing on a study commissioned by the New Orleans City Council that recommends placing strict limits on the number and location of strip clubs in the French Quarter with new zoning rules.

To many working-class artists, entertainers and service-industry workers that make the French Quarter tick, the strip club crackdown appears to be part of what locals call the “Disneyfication” of New Orleans. Wealthy investors and developers took increasing interest in the city as it recovered from Hurricane Katrina, driving up property values and attracting rich transplants to the historic homes in and around the French Quarter. This has led to calls to “clean up” the streets, which have long been home to artists, travelers, street musicians and sex workers. Policies targeting strip clubs and petty crime could marginalize and eventually drive out these members of the French Quarter scene, even though their very presence has made the area the eclectic and vibrant tourist attraction that it is today.