As the American Legislative Exchange Council (ALEC) comes under increasing scrutiny and both corporate and legislative members sever ties with the organization, the Koch-funded Americans for Prosperity (AFP) has jumped in to help.

Multiple Wisconsin legislators tell the Center for Media and Democracy they have received identical emails, under the subject line “Stand Up for Free Market Policies” or “Say No to the Extremists Attacking ALEC,” from people who say they are constituents “troubled by the recent attacks on the American Legislative Exchange Council (ALEC)” and claiming “the organization is critical to the free market in our state.” The text of the emails is identical to a petition being pushed by AFP chapters across the country. 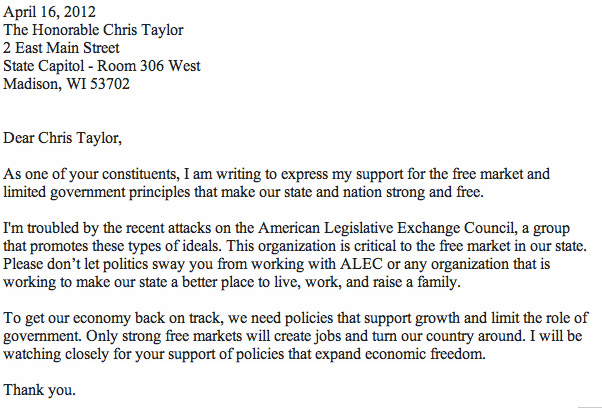 Now compare the text in that email with the petition language from AFP (see bottom): 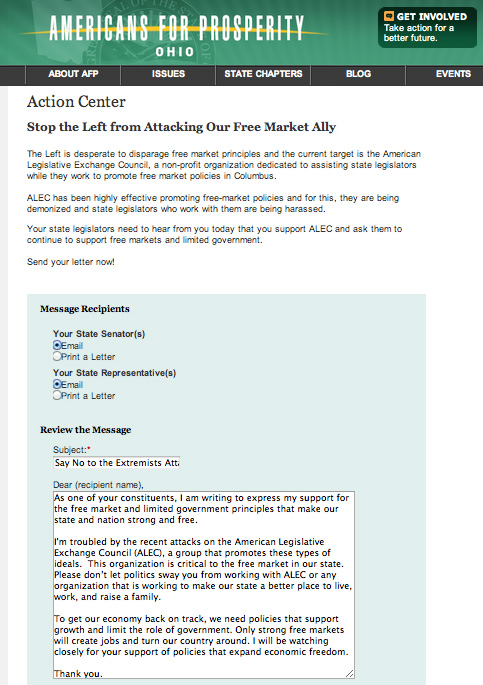 As CMD has documented, ALEC has been reaching out to members and the right-wing media in recent days for support.

AFP is a member of ALEC, and both ALEC and AFP have received funding from the Koch family foundations. And, of course as is widely known, David Koch is the chairman of AFP, which he helped create. As part of ALEC’s PR counter-offensive, AFP has announced a “Stand with ALEC” website — a concept familiar to Wisconsinites since AFP launched a similarly-named “Stand with Walker” campaign in 2011.

Given ALEC’s historically low public profile and its closed-door operations it seems unlikely that the Tea Partiers sending AFP’s pro-ALEC email really know much about the group they are supporting.