On Tuesday, April 24, several hundred activists from around the country gathered outside the Justice Department (DOJ) in Washington, DC, to call for an end to mass incarceration.

The rally coincided with the 58th birthday of Mumia Abu-Jamal, who has spent 30 years on death row for the 1981 killing of Philadelphia police officer Daniel Falkner. Abu-Jamal and his supporters have since maintained his innocence, arguing that his conviction and subsequent death sentence stem from racism on the part of police, prosecutors and the trial judge. In 2011, Abu-Jamal was removed from death row and his sentence reduced to life in prison without parole following a series of court appeals.

The crowd was thrilled to hear Abu-Jamal’s voice over the loudspeaker when he called in from prison. “We gather here today because we want justice and, in the words of the old Black Panther party, we want freedom. We want abolition of the death penalty and abolition of solitary confinement. We want decarceration and the destruction of the mass incarceration complex,” said Abu-Jamal. 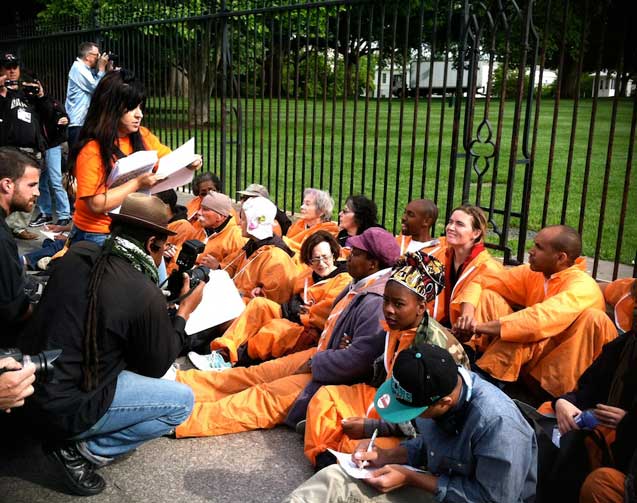 Protesters in orange jumpsuits preparing for arrest as they engage in civil disobedience at White House fence. (Photo: Rania Khalek)

Michelle Alexander, author of “The New Jim Crow: Mass Incarceration in the Age of Colorblindness” has argued, “More African American men are in prison or jail, on probation or parole than were enslaved in 1850, before the Civil War Began.” In her book, Alexander highlights mountains of evidence demonstrating how at every stage of the criminal justice process, from enforcement and prosecution to plea bargaining and jury sentencing, black defendants are treated more harshly for the same crimes as whites, particularly when the victim is white. Nowhere is this more apparent than in the application of the death penalty when, as Amnesty International puts it, “the single most reliable predictor of whether someone will be sentenced to death is the race of the victim.”

Given these disparities, it’s no surprise that the crowd assembled in front of the DOJ building was made up mostly of nonwhite activists with white allies sprinkled throughout. As Sheika, a 21-year-old activist who was master of ceremonies for the event told Truthout, “There is a war on my community and I have to stand up and fight back or no one will.”

The day was packed with speeches by well-known activists and musical performances by some of hip hop’s most politically outspoken rappers, all of whom ultimately joined protesters in a march to the White House fence, chanting slogans like “Brick by brick, wall by wall, we’re gonna free Mumia Abu-Jamal,” among other things. 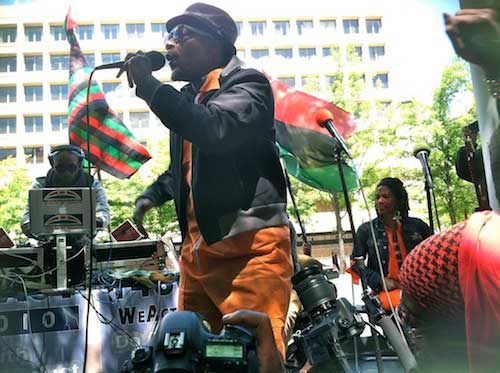 Rapper and activist M-1 from Dead Prez performing in front of the Justice Department building. (Photo: Rania Khalek)Mutulu Olugbala, better known as M-1 of the hip hop duo Dead Prez, riled up the crowd with a concert-like performance that garnered cheers and applause. Later in the day, while standing in front of the White House, M-1 reflected on the irony of protesting racial injustice in front of the place where America’s first black president resides. He told Truthout, “Obama represents white power and that’s not what we represent. We need a real and thoughtful analysis of power in this country that includes not just race, but class – because that’s what it really comes down to.”

As protesters marched closer toward the White House, the conversations and chants struck a new tone, mostly of frustration with the people in power, particularly the president, as well as with those on both sides of the political spectrum who believe racism is dead now that America has elected its first black president. Protesters could be heard chanting, “Obama, come out! We got some shit to talk about!” 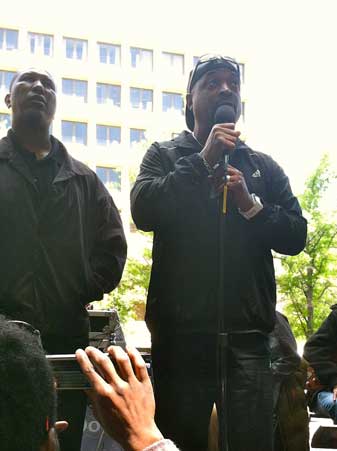 Hip hop artist Chuck D from Public Enemy addressing activists in front of the Justice Department building. (Photo: Rania Khalek)Gonzalo Venegas, a rapper with the Bronx-based hip hop group Rebel Diaz known by his stage name G-1, referred to the notion that we live in a post-racial society simply because we’ve elected our first black president as “a joke.” While he admits it’s important to have more diversity in government, G-1 argues, “It’s not really about having people of color in those positions of power when you have a system that is inherently racist. The institutions, the schools, our courts, our hospitals, our employment sectors are all permeated by racism. We’re still dealing with white supremacy and white privilege.”

John Tuzcu, an organizer with Supporting Prisoners and Acting for Radical Change (SPARC) and a member of the Criminal Injustice Committee born out of Occupy DC, agreed. “When you have a black person of African descent in the highest office of the land, things have changed, but that doesn’t imply they’ve gotten better,” Tuzcu said. “If somebody, whoever it is, white liberals or black bourgeoisie, give a pass to this president’s policies because of the color of his skin, I think that’s weak-minded and ignorant.”

Johanna Fernandez, an activist and history professor at CUNY who helped organize the event, used the people’s mike at the White House fence to explain, “The reason the United States has been able to incarcerate so many black and Latino men is because the media has depicted black and Latino men as menaces to society independent of family, friends.” She continued, “Black and Latino males have been criminalized. Part of what we need to do is show that the people behind bars are human beings with a heart, with a soul, with families, who bleed, who yearn, who love.”

Fernandez argued that the purpose of mass incarceration is “to keep black people in line because historically black people have been the people who’ve fought back against injustice in this country.” As police warned protesters to disperse or risk arrest, Fernandez encouraged protesters to stay if they could. “If you can risk arrest, let’s fucking stand our ground!,” yelled Fernandez.

While the main focus was on the plight of black communities, the main target of mass incarceration, protesters acknowledged that the systemic racism plaguing America extends even further. 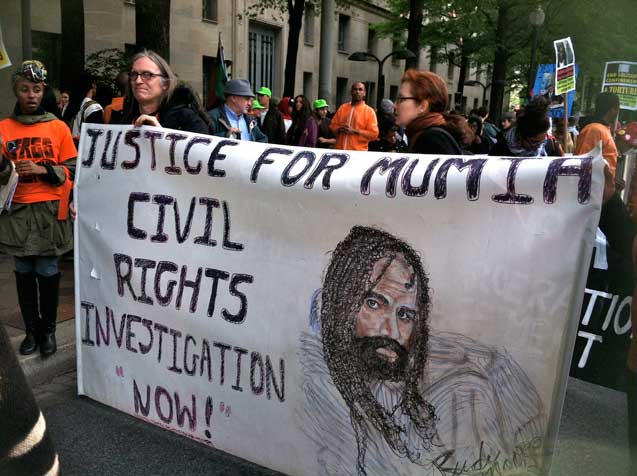 Marta Angel Castillo, who traveled all the way from Tucson, Arizona, told Truthout, “We’re here to fight for our undocumented brothers and sisters so they can have a voice. This country was based in immigrants and anybody who says otherwise is lying.” Castillo is a member of an Arizona organization that seeks to stop SB 1070, the state’s controversial law that gives law enforcement the power to search and arrest individuals they suspect are undocumented, essentially legalizing racial profiling. Alvira Callego, also from Tucson, told Truthout, “I’m a US citizen. I was born in the United States and just because of my skin color I don’t believe I should be stopped or questioned for being a US citizen of color.” 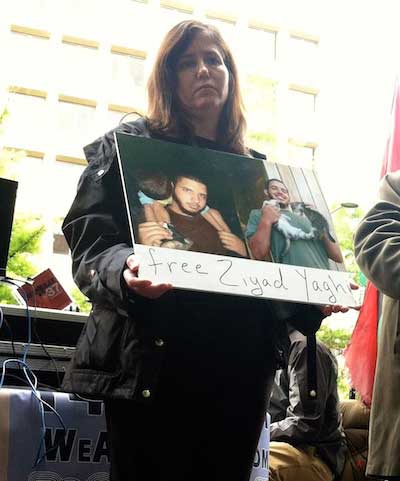 Laila Yaghi holding up a photos of her son, Ziyad Yaghi, who’s serving 31.5 years in prison for conspiracy to commit terrorism, a crime he says he didn’t commit. (Photo: Rania Khalek)Occupy the DOJ showed solidarity with Muslim Americans as well, who have increasingly been targeted by the FBI in a pattern of pre-emptive prosecutions, where young Muslims are charged with conspiring to commit terrorist acts before actually committing them – usually on the flimsiest of evidence. Laila Yaghi, who traveled from North Carolina, held up a poster of her 24-year-old son Ziyad who she says was charged with conspiring to give material support to unknown terrorists following a 2007 trip to visit family in Jordan. Her son, who maintains his innocence, is now serving a 31-and-a-half-year prison sentence.

Ultimately, over two dozen protesters, most of whom wore orange jumpsuits as a symbol of solidarity with America’s imprisoned, were arrested by the DC Park Police. Among them were three women over the age of 75, including 88-year-old Frances Golden, Mumia Abu-Jamal’s literary agent. Speaking on behalf of those risking arrest, Golden told Truthout, “We’re demanding that this be a free country – not a country where most people are in prison who should be in college.” 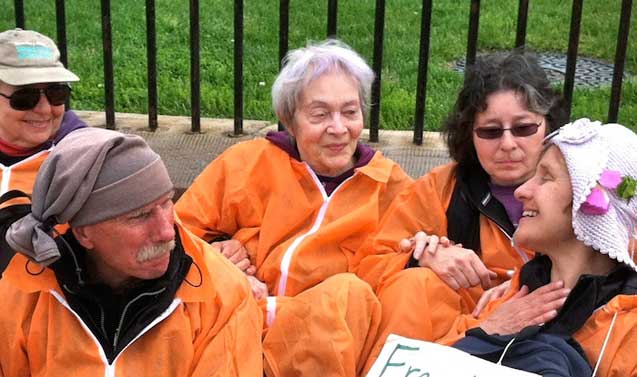 Susan Ross, a 75-year-old activist who was also arrested, told Truthout that her experience growing up in Nazi Europe is what motivates her participation in the struggle against mass incarceration. “I was raised to understand that we are supposed to speak up and fight back against oppression or you get a Nazi Germany.”

At the opposite end of the scale were two 17-year-old high school students, Stephon Doss and his classmate Alexis. According to Doss, this act of civil disobedience was necessary “To show that we’re not scared and we’re fighting for our rights and freedom and justice.” 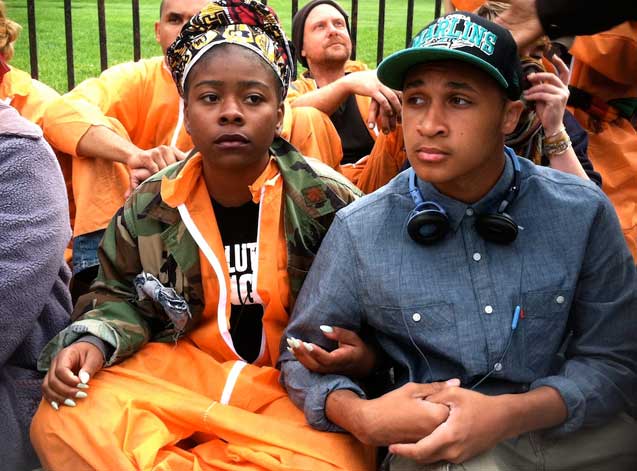 Just before he was arrested, 22-year-old Taylor Gunsayley told Truthout, “It’s a powerful move for a black man to just willingly get arrested, instead of being picked off the street like so frequently happens.” He added, half jokingly, “Being arrested here is much safer than being arrested by myself,” referring to the brutality that’s so often dished out to young black men by law enforcement.

At the end of the day, protesters recognized that a single rally and act of civil disobedience is not enough to overturn mass incarceration. Organizer John Tuzcu acknowledged, “Sometimes people are under the delusion that mobilizations will lead to immediate change but tomorrow nothing is going to change.” Still, he argued, events like Occupy the DOJ are relevant and necessary because they “broaden and build a community of resistance,” the very community that is to integral dismantling a system that has been decades in the making.

Share
This article may not be republished without permission from Truthout.
Rania Khalek