“The term ‘stop-and-frisk’ is really a euphemism. Too often, what actually happens is young Black and Brown people are harassed, degraded and physically and/or sexual abused: We are punished for just being. This demands a shift in public consciousness to reimagine what community safety means and how we achieve it.”—Page May, youth organizer with We Charge Genocide

For months now, it’s been hard to log onto social media without encountering a think piece or op-ed about what Black Lives Matter ought to be doing as a movement. These pieces are often written by white writers and tend to bandy about uninformed arguments about the movement’s lack of goals, leadership and systemic analysis. In reality, the methodically organized efforts of young people of color are often cast aside by more established groups in favor of their own agendas.

A sad variation of this phenomenon is currently unfolding in Chicago, where the American Civil Liberties Union of Illinois has undermined some of the city’s leading young Black activists by making a backroom deal with Mayor Rahm Emanuel that could effectively shut down public dialogue around stop-and-frisk in the windy city.

On the very day that the young members of We Charge Genocide – who range in age from high-schoolers to people in their mid-20s – held a press conference to announce that aldermanic sponsors would be filing the Stops Transparency Oversight and Protection Act (“STOP Act”) in Chicago’s City Council, a mayoral aid put a stop to the process, telling the alderman that negotiations on the matter were in the works and that presentation of the ordinance should be delayed accordingly. In reality, the youth organizers who had campaigned for the ordinance had not been part of any negotiation. While claiming to support We Charge Genocide’s calls for transparency, the Illinois chapter of the ACLU had actually been negotiating a deal that organizers say would make the organization a partner in the enforcement of the city’s code of silence.

The STOP Act was designed by members of We Charge Genocide (WCG), a grassroots group that addresses police violence in the city of Chicago. The bill aimed to increase transparency with regard to stop-and-frisk practices by requiring the Chicago Police Department to collect and share data for all stops, including demographic information of those stopped, the badge numbers of officers involved, as well as the location, reason and result of the stop. The Chicago Police Department would also be required, under the ordinance, to give receipts to those stopped, so that individuals would have their own provable record of the interaction.

On Friday, August 7, ACLU’s deal with the Chicago Police Department was released to the public. According to the agreement, the Chicago Police Department will collect data on stops made by its officers, but it will not be required to release any of the information it collects to the public. Unlike the STOP Act, the ACLU’s agreement only requires that the data be shared with the ACLU and a designated consultant, former Federal Magistrate Judge Arlander Keys. Both the ACLU and Keys will be bound to keep the data confidential under an “attorney’s eyes only” agreement.

We Charge Genocide released an open letter to the American Civil Liberties Union of Illinois on Wednesday, August 12, condemning the organization’s deceptive political maneuvering around stop-and-frisk.

Over the course of the last ten months, WCG began a broad campaign to educate and mobilize youth of color across Chicago to end CPD’s racially discriminatory stop and frisk practices, which has included launching the #ChiStops campaign, recruiting Chicago Votes to work alongside WCG in seeking the passage of the STOP Act, and going to classrooms and schools across the City to do the hard and essential work of building knowledge and support for the legislation among Black youth as young as eight who face discriminatory stops and abuse at the hands of the CPD every single day.

The statement also details what the young organizers find unacceptable in the deal negotiated by the ACLU:

We Charge Genocide’s STOP Act is rooted in the experiences and ideas of those most directly impacted – young Black and Brown people. It is the strong desire of the youth we work with that data on stops and frisks be not only collected, but be made publicly available on a City website every three months as a guarantee of actual transparency. The settlement you agreed to with the City fails to do this. Now, only you and the Consultant are provided with the relevant data and information – and on a confidential attorney’s eyes only basis. All other members of the public must seek the information through the FOIA process, which makes the information both inaccessible and hard to decipher if obtained. Your agreement with the City thus maintains the status quo, in which an elite knowledge of the FOIA process is required to access and review stop and frisk data. This is unacceptable.

Jerry Boyle, a Chicago attorney who frequently works as a legal observer for the National Lawyers Guild told Truthout he agrees with the position forwarded by We Charge Genocide in its open letter.

“The ACLU has allowed itself to be used in a cynical triangulation ploy by the executive branch of the city government, which will now seek to squelch the grassroots effort organized by We Charge Genocide to reform Stop and Frisk in a manner designed to actually make a meaningful difference in the lives of people targeted by the practice,” Boyle said.

Boyle believes that the city accepted the quietly negotiated deal to avoid the creation of regulations that would actually make data about police stops public.

“Even aside from ACLU’s tone-deaf approach to the grassroots, it should be ashamed of itself for getting suckered into this ploy by the Emanuel administration,” Boyle said. “Lawyers should at least be expected to act intelligently. The secret deal ACLU reached with the Emanuel administration is virtually guaranteed to lead to more tragedy, more terrible headlines, and more distrust between police and the communities they are sworn to protect.”

Edwin C. Yohnka, director of Communications and Public Policy ACLU of Illinois, told Truthout that the ACLU is confused by We Charge Genocide’s complaints, arguing that the ACLU’s deal will not undermine passage of the STOPS ordinance, which he claims the organization still supports.

“No single effort, including our agreement, is the end of this movement or advocacy around this issue, nor should it be,” Yohnka said. He also claimed that information about police stops would still be available to the public through the Freedom of Information Act (FOIA). 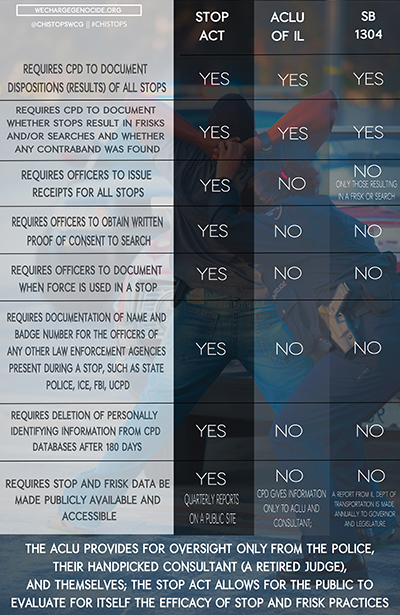 (Image: We Charge Genocide)Local organizer Babur Balos, who has tangled with the city over FOIA requests in the past, said the information should be made available without a FOIA. “The ACLU is playing dumb about how hard it is to get the city to answer a FOIA request it doesn’t want to answer,” Balos said.

“Activists and reporters have pursued records about everything from police surveillance to lead levels in public schools. If they don’t want to tell you, it’s a major battle. Most people give up. Sometimes, the city never complies, no matter what you do. Other times, it takes legal action or a media circus to get a response. If the ACLU’s best defense is that they don’t know how the system works for everyday people, that doesn’t speak well of them.”

As for the ACLU’s claim that its deal with the city won’t hinder passage of the STOP ordinance, Balos added, “They know better than that. The fact that the ordinance wasn’t even presented because of their deal says it all. They know how these things work.”

Young organizers with We Charge Genocide have stressed their continued commitment to passing the STOP Act in spite of the ACLU’s deal. While their efforts may have been seriously undermined by the city’s arrangement with the ACLU, these young people have already demonstrated a propensity to claim unlikely victories. Some of these same young leaders recently played a key role in channeling the momentum of the Black Lives Matter movement into the passage of the Reparations Ordinance for survivors of police torture. They also successfully petitioned the UN’s Committee Against Torture to single out the abusive practices of the Chicago Police Department in a report last year.

The organizers believe that their success has fueled the city’s willingness to negotiate with groups whose demands are less threatening to the status quo. And while the ACLU of Illinois claims that its agreement with Emanuel does not hinder the grassroots efforts of these young Black organizers, the deal that the group has brokered with the city is already being hailed as a possible solution to the acrimony between police and local residents.

With such praise being leveled, at this early stage, the mayor’s office will undoubtedly argue that the issue of stop-and-frisk has already been addressed by the recent deal and that the new policy must be given time to play out before further changes are considered.

Meanwhile, celebration of a policy “solution” that was developed without the consultation of residents who are most impacted by stop-and-frisk rings hollow to young people who feel their work is once again being overlooked in the larger political dialogue. While pundits – who typically have no background in organizing – complain that young activists have no sense of direction, organizations with institutional power are maintaining a long-held tradition of talking over the very people they claim to support. And the result, it seems, will be business as usual.

Full disclosure: the author of this piece has organized with We Charge Genocide, but has not been involved with the STOP Act campaign.