Also see: A Primer on the Antiunion Campaign at Volkswagen; Evidence of GOP Interference in VW Election Is Now Overwhelming; and The Firm Behind the Anti-UAW Videos in Chattanooga. 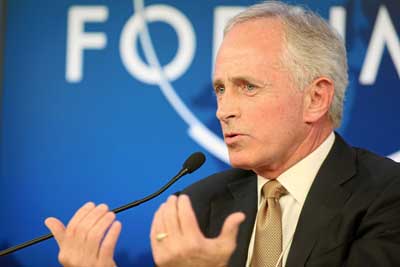 Tennessee Senator Bob Corker at the World Economic Forum. The UAW alleges that Sen. Corker and the Governor of Tennessee violated federal labor law by coordinating with outside groups to sway the unionization vote at the Volkswagen manufacturing plant in Chattanooga. (Photo: Monika Flueckiger / World Economic Forum)John Logan talks about the unprecedented and coordinated interference of national and local politicians as well as GOP astroturf groups’ efforts to prevent United Auto Workers from winning a unionization election at the Volkswagen plant in Chattanooga, Tennessee.

The battle by the GOP and its wealthy donors to keep middle and working class individuals poorly paid and without workplace rights continues. When workers go through the arduous process of trying to form a union, the right cries “Class Warfare!” However, the real class warfare comes not from workers – who are trying to get better wages and benefits in an age when wages and benefits are declining – but from the very groups who champion vague notions of freedom against the collectivism of the union. But what is freedom for the GOP and the corporate interests? It’s certainly not the freedom to organize for better pay and benefits. It’s not the freedom from fear or want because state and federal officials have threatened your economic security if a union is formed. It’s a kind of zero-sum ideal where the freedom of the wealthy and powerful is premised on the subordination of everyone else. The latest example of this kind of top-down class warfare is in Tennessee – where the United Auto Workers attempted to unionize the Volkswagen manufacturing plant in Chattanooga. State and federal officials coordinated with anti-union interest groups by using their power to influence the vote on whether full-time workers at the Volkswagen plant would be part of the UAW.

As John Logan, professor of Labor and Employment Studies at San Francisco State University, states in this “Truthout Interviews,” this may be the first time the government and third party groups have interfered in a vote to join a private union. Historically, the companies where a union is being formed are the ones who try and influence the vote with threats and dirty tricks, but the UAW alleges that the Governor of Tennessee and US Senator Bob Corker violated federal labor law by coordinating with outside groups to sway the election. The evidence? Some of it centers on News Channel 5 in Tennessee – which broke a story that they obtained leaked documents showing the connections between the Governor’s office, Bob Corker’s office, anti-union groups, and financial offers made to Volkswagen if the union vote was defeated. The UAW petitioned the National Labor Relations Board to conduct hearings on the matter and urge the board to call for a re-vote.