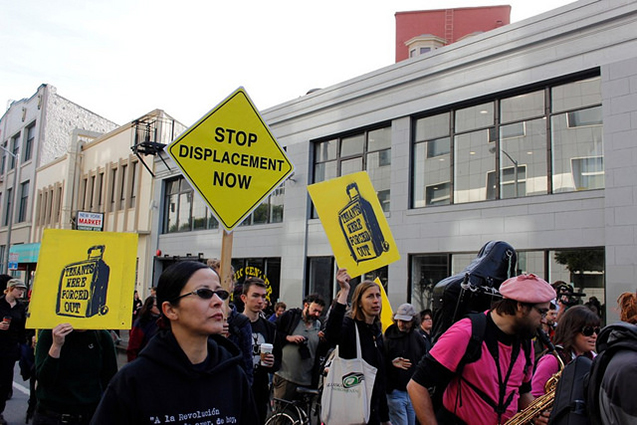 Also see: The Bleaching of San Francisco: Extreme Gentrification and Suburbanized Poverty in the Bay Area

Hudson and Asregadoo discuss the ways in which “tech capitalism” is turning San Francisco into a playground for the very rich – as those who are not wealthy get pushed out to the suburbs.

San Francisco is a top tourist destination for travelers around the world. The picturesque views, the wonderful restaurants, the progressive politics and a kind of left-libertarian cultural openness make it a fairly unique place. Many have remarked that San Francisco reminds them of European cities. However, if San Francisco has European qualities, they are not confined to positive characteristics. Indeed, with the second tech boom reaching a fever pitch, rents in the city are skyrocketing; evictions are up and many residents are being pushed from their urban neighborhoods to the suburbs. The process of gentrification of not just whole neighborhoods, but the entire city is remaking the Bay Area in a way that resembles the core/periphery geography of some European cities. That is to say, the wealthy and upwardly mobile live and work in the core (with San Francisco being the epicenter) while the poor, working class and middle class get pushed to suburban cities in the periphery.

Truthout contributor Adam Hudson lives in the Bay area and writes about gentrification and suburban poverty. What he highlights in his piece for Truthout is how gentrification in high rent places like San Francisco is connected to the increase in poverty in Bay area suburbs like Antioch, Pittsburg, and Vallejo. Gentrification isn’t the only factor in the rise in poverty (the collapse in home prices in 2008-2009 was the first in a series of economic gut-punches during The Great Recession and its aftermath), but it is one that is accelerating its growth.

Many tech workers in the City live in a bubble where they are coddled and increasingly shielded from the “outside” world. They get shuttled to work for free on private luxury buses. Some work in an Elysium-like world where freedom from want seems to be the norm. For example, at a company like Google, free food, haircuts, dry cleaning, and massages make up just a few perks employees enjoy. But the real benefit of being an architect of the digital world is the money. The money these companies make buys power; power to make the outside world resemble the bubble of the Googleplex. If the wealth these companies generate meant that more and more people in the Bay Area benefited from what they produce, the displacement and growth of poverty wouldn’t be as pronounced. However, tech companies employ a relatively small workforce skilled in highly specialized areas. Despite the global reach of companies like Google, Facebook, and the like, “Tech capitalism” is a very exclusive club. Those fortunate few who have the right skill set are “in.” The outsiders (and this can include tech workers who are over 40) struggle to find good paying jobs, have to travel farther to work in the core, and sometimes reside in suburban cities that are ill-equipped to deal with the spikes in poverty among their residents.