From the Saudi-Yemen border to lawless Somalia and the north-central African desert, the U.S. military is more engaged in armed conflicts in the Muslim world than the U.S. government openly acknowledges, according to cables released by the WikiLeaks website.

U.S. officials have struck relationships with regimes that generally aren’t considered allies in the war against terrorism, and while the cables show U.S. diplomats admonishing the regimes to respect the laws of war, they also underscore the perils of using advanced military technologies in complex, remote battlefields with sometimes shifty friends.

Cables released this week indicate that the United States: 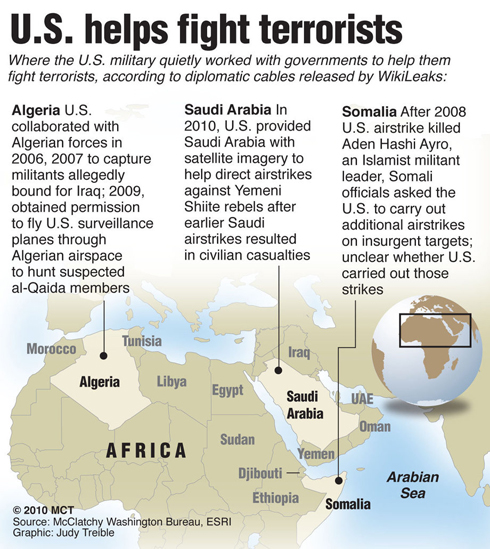 Experts said that the revelations of secretive American operations in Muslim countries could offer fodder to Islamist militants who accuse the United States of aggression against Muslims and of siding with authoritarian and unpopular regimes.

“This kind of feeds the al Qaida narrative, that we’re doing it everywhere,” said Lawrence J. Korb, a senior fellow at the Center for American Progress in Washington and a former Pentagon official in the Reagan administration.

The Pentagon hasn’t acknowledged its role in Saudi Arabia’s sporadic fight against a Yemeni Shiite group known as the Houthi.

But a cable from the U.S. embassy in Riyadh says that in February, a senior Saudi defense official asked the U.S. for satellite maps of its border with Yemen to help the underequipped Saudi air force target the rebels, and the U.S. ambassador, James B. Smith, agreed.

A previous Saudi airstrike had hit a medical clinic, while another bombing run turned back when pilots learned that the target — selected by the Yemeni government — wasn’t a rebel site but instead the headquarters of a political opponent of Yemeni President Ali Abdullah Saleh.

The strikes “were necessarily being conducted without the desired degree of precision,” said the Saudi official, Prince Khaled bin Sultan. When Smith produced a satellite image of the bomb-damaged clinic, bin Sultan suggested that his air force needed more advanced aircraft.

“If we had the Predator, maybe we would not have this problem,” he said, referring to a drone aircraft the U.S. has used extensively in strikes on suspected terrorists in Pakistan and elsewhere.

The cable said that Smith agreed to furnish the Saudis with the satellite imagery because, while the Houthi clashes appeared to be dying down, the imagery would help Saudi forces keep a better eye on suspected al Qaida activity in that area.

In the meeting, however, bin Sultan said that the more immediate priority for his government was reaching a ceasefire with Yemen and the Houthi.

“Then,” the prince said, “we can concentrate on al Qaida.”

Peter Singer, the director of the 21st Century Defense Initiative at the center-left Brookings Institution in Washington, said the exchange illustrates the dangers of U.S. forces relying on local allies who have other objectives.

“There are no guarantees that our ally might not also use the tools against another of their enemies — indeed, they would be almost remiss not to,” Singer said. “The end result is that you may get the action you may have wanted, but you also incur all sorts of unexpected side effects, including in these cases being drawn into local disputes that aren’t fully in our strategic interests.”

Cables also show that the U.S. military has established a partnership with Algeria to combat al Qaida in the Islamic Maghreb, one of the terrorist organization’s most fearsome franchises.

In February 2008, U.S. officials in Algiers reported that they’d worked with Algerian military intelligence — a “prickly, paranoid group,” according to a cable — to root out networks funneling dozens of militants to Iraq. However, the cable noted that Algerian authorities “do not like to discuss our cooperation” publicly, and that while the FBI had opened an office at the U.S. Embassy, “the Algerians are not rushing to cooperate.”

In Somalia, the Pentagon acknowledged at the time that a 2008 U.S. airstrike killed Aden Hashi Ayro, an Afghanistan-trained jihadist who U.S. officials thought was al Qaida’s “point man” in the East African nation. It remained unclear, however, whether the U.S. military was coordinating with Somalia’s weak and unpopular transitional government, which has been battling al Shabaab, the Islamist militia that Ayro led, since 2007.

A May 2009 account of a meeting between U.S. officials and the Somali prime minister didn’t specifically refer to the Ayro strike, but it said that the Somali government thought such strikes were “necessary” and discussed a phone call two weeks earlier in which the country’s prime minister had asked the U.S. to “take out” insurgents that Somali officials had learned were meeting in a remote southern town.

The cable was the result of a brief meeting between U.S. officials from the embassy in Nairobi, Kenya, and the Somali prime minister, Omar Sharmarke, who’d stopped over at Nairobi’s airport on his way from the Somali capital, Mogadishu, to a meeting in Libya. The U.S. has no diplomats in Somalia.

During the meeting, Sharmarke mentioned that his May 16 phone call to U.S. military officials in Kenya asking for actions against the militants had been made with the consent of Somalia’s President Sheik Sharif.

Such strikes had angered the Somali population previously, however, and U.S. officials asked Sharmarke whether his government could withstand fallout from additional strikes “and their potential collateral damage.”

The prime minister, the cable recounted, “without hesitation, said ‘Yes.'”