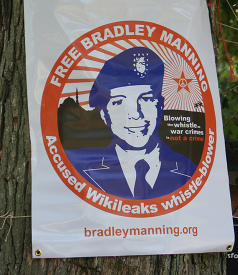 Washington – The U.S. Army has launched a wide-ranging investigation into how a private suspected of downloading thousands of secret reports and diplomatic cables and handing them over to WikiLeaks was able to do so and whether other soldiers should face criminal charges in the case, McClatchy has learned.

The Army confirmed the investigation, but wouldn’t release details. An Army official familiar with the investigation told McClatchy that the six-member task force has been given until Feb. 1 to complete a report that will look at everything from how Pfc. Bradley Manning was selected for his job and trained to whether his superiors missed warning signs that he was downloading documents he had no need to read.

The report could change how the Army — the largest distributor of government security clearances — grants access to government documents as well as lead to recommendations of charges against soldiers who worked with Manning and may have been aware of his activities.

It’s the second time in two years that Army procedures have been the subject of intense internal investigation. A similar probe was undertaken after an Army psychiatrist allegedly opened fire on fellow soldiers at Fort Hood, Texas, in November 2009, killing 13. That investigation focused, in part, on how superiors failed to notice signs that Maj. Nidal Hassan, who’d exchanged e-mails with a radical Yemeni-American cleric, might turn violent. The probe resulted in dozens of changes in Army procedures.

Manning was working as an intelligence specialist in Baghdad during 2009 and the early months of 2010 when he allegedly downloaded hundreds of thousands of classified documents.

Those documents reached WikiLeaks — Army officials have said they’re not certain how — and have been published by the website in four separate bursts that began in April with the release of a video showing an Army helicopter firing on civilians in Baghdad, killing two Reuters news agency employees. The website also released tens of thousands of documents related to the wars in Iraq and Afghanistan before the current, ongoing publication of hundreds of thousands of State Department cables, which began Nov. 28.

Manning allegedly downloaded the documents while pretending to listen to music by Lady Gaga on headphones, a cover story, investigators say, to explain the sound of the computer’s CD drive whirring as he copied the files. He’s being held in solitary confinement at the Quantico Marine Base in Virginia on charges that could lead to a 52-year prison sentence. Some human rights groups charge that Manning is being mistreated, with no ability to exercise or access to news. The Defense Department has denied the claims.

Army Lt. Gen. Robert Caslen Jr., the commander of the Army General Command and Staff College at Fort Leavenworth, Kan., will lead the study, which was ordered by John McHugh, the Army secretary.

“Lt. Gen. Caslen has a very broad investigative mandate and he has been assured of the cooperation of both the Department of the Army and the U.S. Central Command as he proceeds. Lt. Gen. Caslen’s investigation will not interfere nor conflict with the ongoing criminal investigation,” Army spokesman Lt. Col. Christopher Garver said in a statement prepared in response to questions from McClatchy.

No other service branch is conducting a similar investigation, but the Army findings could lead to changes throughout the military. With more than 800,000 uniformed personnel, the Army issues more security clearances than any other government organization.

How Manning came to be an intelligence specialist will be a key question for the task force.

The U.S. government has three broad classes of classified documents — confidential, secret and top secret. Each service determines how much access a soldier needs, depending on the job. A central Defense Department agency, Defense Security Service, issues the clearances based on the soldier’s job, need-to-know government secrets and a background check. Higher-level clearances also may include interviews by DSS. The length of time the clearance is in effect depends on the job and the level of access given.

Access to secret documents can be lucrative, as some soldiers are able to reactivate their clearances after leaving the military, making them attractive to private contractors doing work for government agencies.

According to a 2009 U.S. Government Accountability Office report, about 2.4 million people have security clearances, down from 3 million in the 1990s. The drop, the GAO found, reflected the reduction in size of the Army, which went from 20 divisions to 10.

Despite the drop in numbers, soldiers increasingly have had access to a wider breadth of information, especially during the Iraq War. The idea was to get as much information to the war fighter as possible, as any tidbit could save lives.

But since WikiLeaks began publishing classified State Department cables that date back to 1966 and touch on nearly every international issue, the State Department removed its cables from the Defense Department’s Secret Internet Protocol Router Network, or SIPRNet, the Pentagon’s classified computer system, and the White House has ordered agencies across government to look for better ways to protect information.

The U.S. Justice Department also is conducting an investigation into whether to bring charges against WikiLeaks founder Julian Assange, though such a prosecution faces a number of challenges, including the apparent difficulty prosecutors are having tying Assange directly to Manning.

Manning, now 23, reportedly isn’t cooperating with investigators, and Defense Department officials who’ve been briefed on the case said according to their most recent information, now months old, no direct tie has been established between Manning and Assange.