When General Motors named Mary Barra the company’s new CEO in December, the announcement made instant headlines. No woman had ever steered a major global automaker .

But the hurrahs for GM’s historic hire turned into hoots of derision when a company filing revealed its new chief executive’s pay. 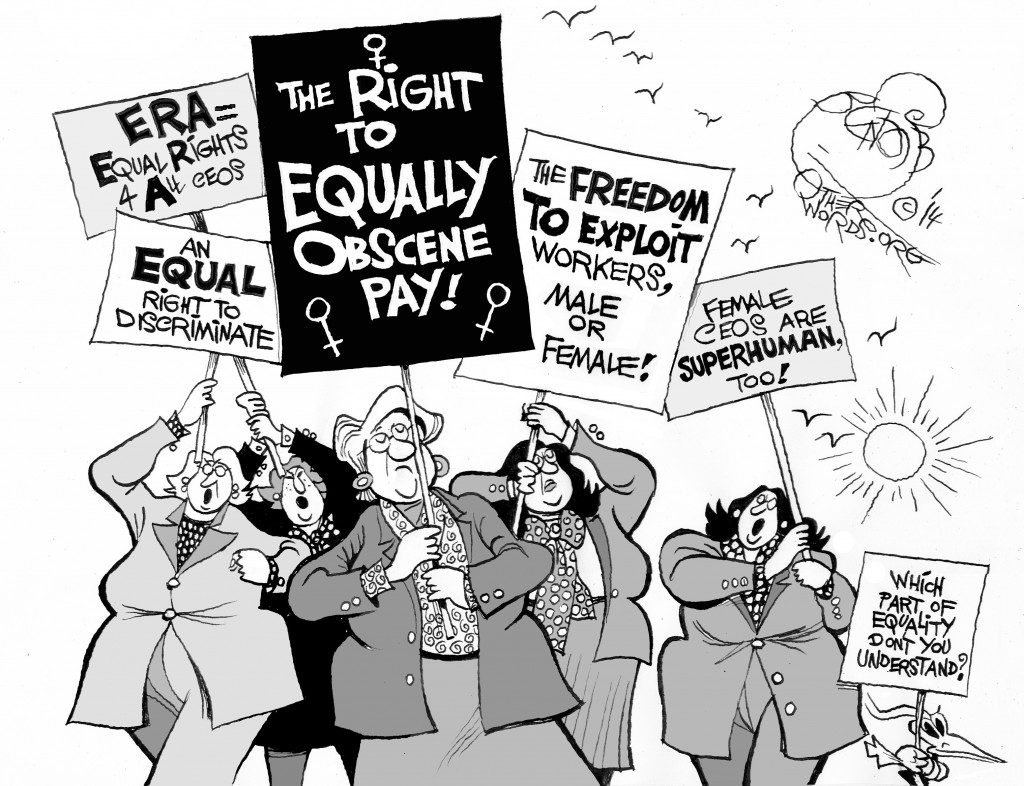 The Right to Equally Obscene Pay, an OtherWords cartoon by Khalil Bendib

These charges quickly shoved GM into damage-control mode. The company’s first response: a statement designed to “dispel any notion of pay inequity.”

The $4.4 million 2014 pay figure for Mary Barra, the automaker pronounced, didn’t include her long-term incentives.

How much would these rewards total? GM wouldn’t say exactly. “Specific long-term incentive compensation numbers,” would have to wait until April, the company explained.

The automaker’s new CEO, it turns out, stands to take home $14.4 million this year once long-term incentives get factored in. That’s roughly 60 percent more than her predecessor.

Barra’s total 2014 compensation, GM board chair Tim Solso assured the company’s critics, would be “in line” with her auto industry peers. “The company’s performance will ultimately determine how much she is paid,” Solso explained.

So CEO Barra will receive an extra $10 million if GM “performs”? But what about the men and women who make GM’s autos and trucks? How much will those workers receive for GM’s 2014 “performance”?

We won’t know that until GM releases annual profit-sharing numbers next winter. We do know that GM’s 48,500 hourly workers will receive, for the company’s 2013 performance, up to $7,500 each in profit-sharing checks.

These checks, the Detroit News observes, amount to little more than “a pseudo-annual raise.” GM’s veteran hourly workers “haven’t gotten a real raise for the past decade.” And newly hired workers? Under GM’s two-tiered wage system, these newcomers start out “at half the hourly rate of veteran employees.”

In 2014, chimes in CBS MoneyWatch, GM CEO Mary Barra will rake in 329 times what the average auto industry worker takes home. Women comprise about 21 percent of auto workers. The first-year workers at GM among them will take home less in a year than Mary Barra makes in a day.

This pay gap between Barra and GM’s rank-and-file doesn’t seem to embarrass Tim Solso and his GM board mates, not anywhere nearly as much as the much tinier gap critics initially saw between the pay of Barra and her male predecessor.

We should all be pleased, of course, that GM’s directors felt such an intense need to correct that “misperception” they were underpaying their first female CEO.

The pressure — and embarrassment — that GM’s top brass felt helps show that years of struggle against sexist pay inequities at the top of the corporate ladder are bearing fruit.

No major American corporation, this episode reveals quite clearly, can afford these days to get publicly branded as an employer that discriminates against women. Our society has indeed come a long way.

But the flap over Barra’s pay also shows how far we have yet to go.

Most women will never sit in a corporate executive suite. Neither will most men. They’ll work regular jobs, doing work that generates immense amounts of wealth. The rewards for creating all this wealth? Much more than the lion’s share will go to America’s overwhelmingly male corporate executive class.

Maybe someday the enormity of the pay gap between workers and executives will embarrass corporate leaders as much as the hubbub over Mary Barra’s compensation embarrassed General Motors.

We can hope for that day. Better yet, we can fight for it.