In case after case around the world, water is being turned into a good for sale and for profit. Driven by a different vision and by economic necessity, a global counter-trend is growing to assure that household water be free or cheap, accessible, and safe, and that the earth’s water be kept pure and flowing. Marcela Olivera is a part of this movement. In 2000, she played a key role in organizing the massive protests in Cochabamba when residents of the city forced the Bechtel Corporation to give up control of the municipal water system, thereby restoring water as a human right for all instead of as a source of corporate income. This victory has been repeated elsewhere in Bolivia and around the world.

There have been a series of policies implemented in Bolivia intended to privatize our natural resources. One of these directly impacts people’s everyday lives: it’s the move to privatize water by giving contracts to multinational corporations 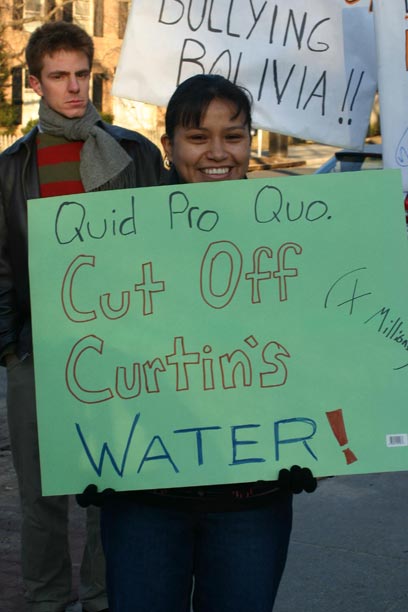 (Photo: Marcela Olivera)to manage the municipal water supply and other sources of water. In Bolivia, there was a huge public outcry against this in 2000 and 2005 and, in the end, we were able to reverse the policy.

Now that’s the official, romanticized version of what happened, but nobody sees what’s happened since then. The struggle over who controls water is ongoing.

No one seems to pick up on how closely water issues are related to other urgent things that are now happening in Bolivia. Water is the one issue where everything intersects; it crosses over into political issues and economic issues in every country. In the struggle over water, people have also been fighting to have their voices heard and to better their living conditions. I think it’s really important that we understand that. Even the fact that Evo Morales is president now is really a result of the water war that broke out in 2000.

What we’re fighting for is effective, participatory control by the people over our social resources of water, health and education, as an 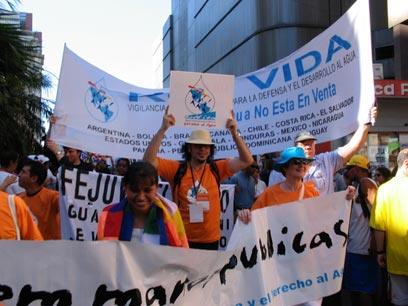 (Photo: Marcela Olivera)alternative to private control. This is going on all over Latin America.

We’re not searching for one solution, a single model of how to do things. I don’t believe there is a single solution to our problems. Our realities are all so diverse that it would be impossible to say, “This will work for everybody.” There are a lot of possible solutions out there. What’s going to be really important now, in the midst of our fights to control our own resources, is to connect with people on a human level. I think that’s where we have to start, with the human side of things and then, from there, to move on to bigger things, bridging the distances between us – not just the physical ones, but gaps in technology, communication, and sometimes even language.

One thing that we’re taking away from globalization is that it’s not just about the economic policies that are being imposed on us. It’s also about bringing us into contact with one another. 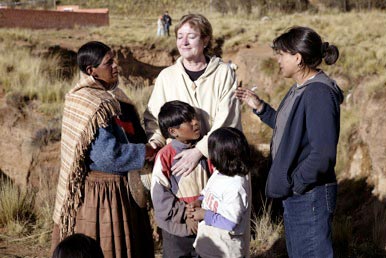 (Photo: Noah Friedman)We’re building alliances among ourselves that respect those differences and the diversity of experiences. That’s the great thing about it. One of the connections that’s happening is between women. The group I work with, Red VIDA [Inter-American Network of Vigilance for the Defense and Right to Water], is run by women. In fact, it’s a Latin America-wide water rights network of unions, non-governmental organizations, and grassroots groups, but women are the driving force. If you look at the outreach committee, it’s all women; we’re from El Salvador, Uruguay, Mexico, Bolivia, Brazil, and the US. The name says it all: the word ‘network’ is feminine in Spanish.

I believe women are organizers by nature, because we’re very sensitive and because we have the ability to show what we’re feeling. But women are still marginalized; there’s a kind of invisibility around the work that women do on water issues. For example, I notice that the organizing work is mainly done by women, but then the one who always stands up in front of the meeting to explain how everything was organized is a man.

I think it’s fantastic that women have stepped up and are leading the way in the fight over water rights. In our continent, at least, the face of the movement is the face of a woman.