This is the tenth article in the Judicial Amendment Project series on the history of the National Labor Relations Act. The stories in the series to date include:

In our last article, we highlighted the careful balance that Congress struck on the issue of union dues. Congress required unions to represent every employee fairly, whether or not that employee was a member of the union. But Congress saw that allowing “free riders” to benefit from union representation but not pay their fair share for that representation, would eat away at union power.

Congress’ solution was to allow unions to charge dues to everyone who benefits from union representation. And union members have legally guaranteed democratic rights within the union. Those rights are similar to rights American citizens have to hold their political representatives accountable.

However, over time, this careful balance has been undermined in many ways. Knowing who has attacked workplace citizens’ obligation to pay union dues for union representation reveals their true motives. These groups have followed in the footsteps of the American Liberty League, discussed in an earlier post.

The most active anti-union dues group has been the National Right to Work Legal Defense Foundation, a tax-exempt nonprofit organization founded in 1968. Its purpose is to provide free legal assistance to employees who challenge paying union dues. The NRTWLDF has millions of dollars from tax deductible contributions and grants that it uses to provide lawyers to attack union dues. Although the amount of dues money at issue in each case is small, the well funded NRTWLDF can provide free legal representation and afford to litigate cases all the way to the US Supreme Court.

Other well-funded conservative organizations also vigorously attack union funding. Among the most active groups are the Heritage Foundation, the Mackinac Center, the Manhattan Institute, the Center for Union Facts, the Hoover Institution and the American Legislative Exchange Council (ALEC).

These groups have successfully limited union dues in ways that weaken unions and interfere with the balance of power that the National Labor Relations Act was designed to achieve between corporations and employees.

The first limitation came in 1947, when Congress amended the NLRA to allow states to enact so-called “right to work” laws. The term, right to work, is an advertising agency’s dream. Right to work has nothing to do with whether employees have a right to work. Instead, these laws forbid employers and unions from agreeing that all the employees must pay their fair share of union dues. In states that have enacted a “right to work” law, unions must still represent all of an employer’s employees, but free riders can avoid paying for the representation.

These laws weaken unions in two ways. One is to decrease the money unions have to negotiate collective bargaining agreements and represent their members. In addition, unions are weakened by the divisions caused by anti-union workers who refuse to pay their fair share.

State legislatures are not the only ones who have disrupted the balance of power between workers and employers. Cases filed by the National Right to Work Legal Defense Foundation have led to limits on the collection of union dues. Although the NLRA clearly allows unions to charge “dues and initiation fees” to nonmembers if a union security agreement is negotiated by the employer and the union, the Supreme Court, in CWA v. Beck (1988), a case brought by the NRTWLDF, judicially amended the NLRA to hold that “dissenter” employees could not be required to pay full dues.

CWA v. Beck judicially amended the law to allow unions to collect dues from objecting employees only for union activities that are “germane to collective bargaining.”

The court reached that decision by ignoring the fact that the NLRA plainly allowed unions to collect dues and initiation fees. In fact, nowhere does the NLRA say that dues can be reduced for some employees who object to some types of expenditures. Furthermore, Congress said nothing about limitations on how unions could use the dues and fees that the law authorized them to collect.

In other words, the court required unions to give anti-union employees a discount on paying dues.

The Effects of CWA v. Beck

This decision and others have forced unions to spend enormous resources on auditors and accountants to determine and document which expenses can be charged to objectors and which cannot. The rules on what is chargeable and what is not are complex. For example, a union must divide up the cost of producing and distributing its newsletter because, depending on the topic, the cost of some articles will be chargeable to the dissenting employee while the cost of others will not.

Unions are required to notify employees that they can decline to be full union members and can get reduced dues payments. Unions must carefully estimate which costs can be charged to the dissenting employee. Because underestimating the required reduction might lead to an expensive lawsuit, unions will tend to overestimate to avoid the risk of charging for something that is not chargeable. As a result, objectors may not even have to pay all chargeable costs.

A second source of costs for the union – and disputes – is a union’s obligation to provide detailed information to employees about how chargeable expenditures are decided.

Third, unions must create a fair legal process that allows employees to challenge union decisions as to which expenses are chargeable.

Fourth, the Supreme Court decided that unions must bear the burden of proving whether an expense is chargeable. Burdens of proof are not just legal mumbo-jumbo. They are about picking winners and losers. Putting the burden of proof on unions makes it harder for unions to win.

Dues dissenters who challenge each of these union determinations can get free legal help from the NRTWLDF and have an easier time of winning because the dues dissenters do not have the burden of proof. 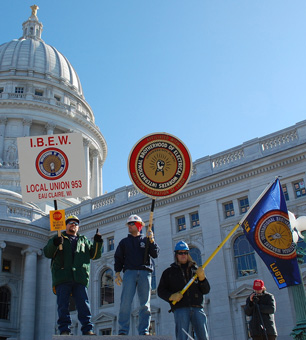 (Photo: Jonathan Bloy / Flickr)Ultimately, decisions like CWA v. Beck have placed a huge financial burden on unions that leaves less money and time to represent union members. Union resources that go into this process drain money that could instead be spent on obtaining better benefits for employees or protecting employees from employer violations of employee rights.

In addition, the law currently allows unions to charge employees full dues unless the employee objects. In a recent case, however, the Supreme Court suggested that in the future it might change the law to prohibit unions from charging any employee full dues unless the employee affirmatively chooses to pay the full amount. Such judicial activism would reverse many years of Court precedent and judicially amend the NLRA even further.

Although the focus of this series is the private sector, it is worth noting that opponents of unions used the Great Recession’s impact on government budgets to push for limitations on union dues and collective bargaining for government employees. Since 2010, limitations on dues collection from public employees have been enacted in Alabama, Arizona, Michigan, North Carolina and Wisconsin, although all have been legally challenged.

Restricting unions’ collection of dues and forcing them to spend money on things unrelated to effective representation of employees erodes the power of unions and employees and unbalances bargaining power because unions have no significant sources of funds other than dues.

Remember that the NLRA was designed to balance the power of corporations with collective employee power. Given the enormous resources of corporate America, a labor movement with limited resources can scarcely provide such balance. Could that be the goal?

Donate Now
Share
Copyright, Truthout. May not be reprinted without permission.
Ellen Dannin

Truthout
Share
Right-wing groups have used their deep pockets to pull off a legally sanctioned pickpocket of unions.
Economy & Labor