Charlotte, NC — Two journalists covering the Democratic National Convention were confronted on Sunday by two undercover agents who assaulted one and threatened to punch the other in the mouth for photographing them.

The two journalists, Kevin Gosztola of Firedoglake.com and Steve Horn, a Truthout contributor credentialed to cover the DNC for WORT-FM in Madison, Wisconsin, took notice of four burly middle-aged white males during a public march. The four were taking photos of the undocumented immigrant contingent in the march. They were carrying “No Papers, No Fear” blue flags and had put stickers from Code Pink on their person to make it seem like they were protesters in the demonstration. One man in an orange shirt had a black piece in one of his ears.

Horn and Gosztola followed one of the men when they left the demonstration. At the corner of North Church Street and West Fifth Street, the man in the orange shirt claimed he was a protester and did not like having his picture taken. He threatened to punch Gosztola “in the teeth.” He belligerently commanded the two journalists to cross the street. The agent in the orange shirt then grabbed Horn and pulled him to the corner where Molly MacPherson’s Scottish Pubs is located.

The officer that stopped Gosztola said the men were just people who did not like having their picture taken. He asked Gosztola to turn over his phone. Gosztola deleted his photos in front of the officer in order to avoid arrest or confiscation of the device. The officer searched through Gosztola’s backpack demanded identification which he reported to authorities.

The uniformed police officer that stopped Horn told him the men were officers. The uniformed officer referred to one of the men as an “officer” when speaking with Horn.

Many of the people in the undocumented immigrant contingent came to Charlotte on a bus from Phoenix, Arizona, called the “No Papers, No Fear” bus. Four were arrested in Knoxville, Tennessee, while protesting the possible implementation of a proposed immigration law. The four were held for three days and then released.

It was the two journalists’ concern with the fact that the photos being taken by the undercover agents of undocumented immigrants exercising universal freedom of assembly and free speech rights would be for the purpose of targeting them for deportation.

“There’s nothing illegal about photographing people on the street” says Jane Hamsher, publisher of Firedoglake. “There was absolutely no provocation that could have possibly justified the thuggery and bullying by law enforcement agents of journalists who were legitimately covering a public event. It was an outrageous abridgement not only of freedom of the press, but of individual civil liberties.”

Below are photos of at least two of the men who were at the march undercover that Horn took. If you have any information regarding the identity of these individuals, or details about their illegal activities at the Democratic Convention please call Gosztola or Horn. 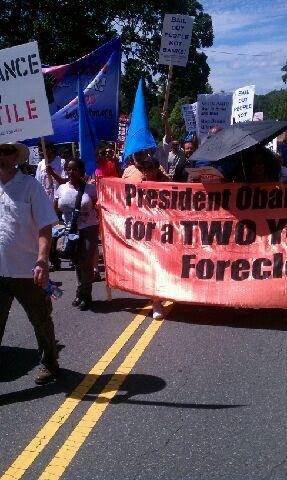 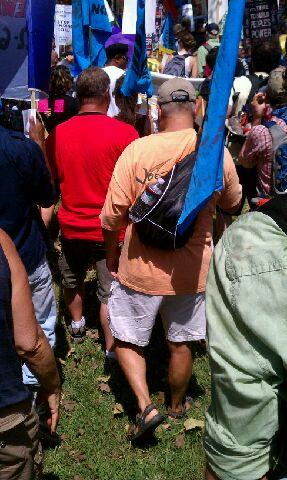 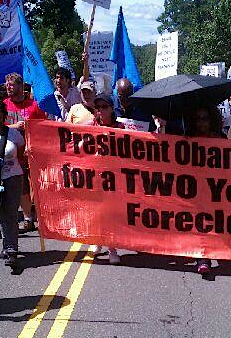 Share
This article is a Truthout original.
Kevin Gosztola