I went through the Federal Reserve’s Quarterly Release on Household Debt and Credit released today, and there were two notable trends. One is that the amount of consumer debt is declining, but that delinquency rates are stabilizing above what they were before the crisis. And the second is in this graph, which is that the number of people subject to third party collections has doubled since 2000, from a little less than 7% to a little over 14% of consumers. Ten years ago, one in fourteen American consumers were pursued by debt collectors. Today it’s one in seven. 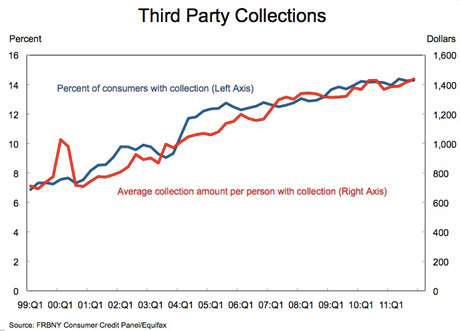 The experience of debt collection can be chilling, as this 2007 ABC News report suggests.

Consumers around the country have taped threatening phone calls from collectors who have called in the middle of the night, used abusive language and have threatened to have people fired from work or thrown in jail. All of these tactics are illegal under federal law.

One of the characteristics of the new social contract ushered in by both George W. Bush and Barack Obama is the increasing power of creditors to govern outright, from tax farming by banks to the use of credit checks to access employment opportunities.

There are now thousands of people legally jailed because they aren’t paying their bills, ie. debtor’s prisons have returned. Occasionally elites let it slip that this is not an accident, but is their goal – former Comptroller General David Walker has wistfully pined for debtor’s prisons overtly (on CNBC, no less).

This may be somewhat mediated by government action, as the CFPB is beginning to make noise around debt collection and credit ratings, and Illinois Attorney General Lisa Madigan is working to stop debt-related arrest warrants. But only somewhat, only where the government can protect you and only when there is the political will to do so. Increasingly, creditors are coming to set up the institutional structures for financial surveillance, state-sponsored enforcement of their claims through tightened bankruptcy laws and the selective use of jail, and the denial of economic opportunity based on one’s interaction with the financial system.

This is part of the new social contract. The sheer percentage of consumers with third party collections in pursuit is striking. Additionally, the uptrend through both Bush boom and Obama bust years of the percentage of people being tracked down by third party collection agencies suggests we live in a different country than we did just ten years ago.

Again, ten years ago, one in fourteen Americans were pursued by debt collectors. Today it’s one in seven. I suspect this number will keep going up. And though debt collection is a highly competitive field, it’s also a growth industry.