Corporate money has had a devastating effect on the democratic process in the United States, made worse by the Supreme Court’s Citizens United decision. But Americans are fighting back. In When Money Talks, Derek Cressman argues that a constitutional amendment is the solution and reveals an oft-overlooked tool that citizens can use to ensure an amendment’s passage. To order your copy, make a donation to Truthout today!

The following is an excerpt from When Money Talks: The High Price of “Free” Speech and the Selling of Democracy.

The wealthiest 0.1 percent of Americans now control a greater portion of our nation’s wealth than at any time since the Great Depression. This growing concentration of wealth in the hands of the few threatens both our economy and our democracy.

Nine times out of ten, the candidate for Congress who raises the most money wins the election. Knowing this, candidates spend their time talking to rich people and asking them for big chunks of money, leaving little time to talk to average people who might only be able to give $25 or $50. In the 2010 election cycle, 26,783 people donated over $10,000 – the total amount these individuals donated represented one-fourth of all the funds raised by candidates, parties, and political committees. Over half of these donors were tied to corporations, and 15 percent were either lobbyists or lawyers. These donors live primarily on the coasts or in such major cities as Chicago and Dallas, yet they give primarily to candidates outside the districts they live in.

In the 2014 campaign cycle, the top one hundred donors contributed nearly as much as an estimated 4.75 million people who gave $200 or less to a federal candidate. So, each of those plutocrats had nearly five thousand times as much influence as the average small donor.

The Rich Are Different

First, candidates who are most successful at raising money from wealthy people and interests are the ones most likely to win. This reality skews the pool of candidates who choose to run for office in the first place, since not everyone interested in politics is willing or able to play the money game. Moreover, even if the donors had absolutely no influence on the opinions of candidates they support, we wind up with a Congress that is more likely to reflect the views of the wealthy than of ordinary Americans because candidates with views the wealthy approve of will win.

One study found that wealthy people worried far more about federal budget deficits than average people, who were more concerned about unemployment. While a majority of Americans favored increasing taxes on millionaires as a way to reduce the deficit, wealthy survey respondents, not surprisingly, didn’t think that was such a good idea.

The second problem comes from candidates having hundreds of conversations with wealthy people in the process of asking them for money. These conversations do have an influence on the opinions and priorities of the candidates and those who then get elected. That is, after all, the whole point. When Charles Keating, the CEO of the Lincoln Savings and Loan Association at the heart of the 1980s S&L crisis, was asked if his political contributions had worked to influence legislators to take up his cause, he replied, “I want to say in the most forceful way I can: I certainly hope so.”

It cost US taxpayers $3 billion to bail out the savings and loan industry after reckless behavior by Keating and others, which was only allowed due to loosened regulations. It cost Keating only a few pennies on the dollar in campaign contributions to buy the influence he needed to keep his fraudulent banking practices going. One regulator described a meeting with the so-called Keating Five, a group of US senators that Keating had plied with $1.3 million in campaign contributions, as “tantamount to an attempt to subvert the regulatory process.”

Donors know when they speak with a candidate, either directly or through a hired lobbyist, that speech is persuasive. It may not always convince the candidate toward the donor’s point of view, but it is more beneficial to the donor to have the conversation than to not. Their donation buys access and influence with elected officials, which is why they write the check. Money talks.

When a tiny group of wealthy people have dramatically more influence over who runs for office, who wins elections, what issues candidates campaign on, what issues they discuss privately with donors and regulators, and how they officially act upon those issues while in office, we have lost the core principle in a democracy of one person, one vote. 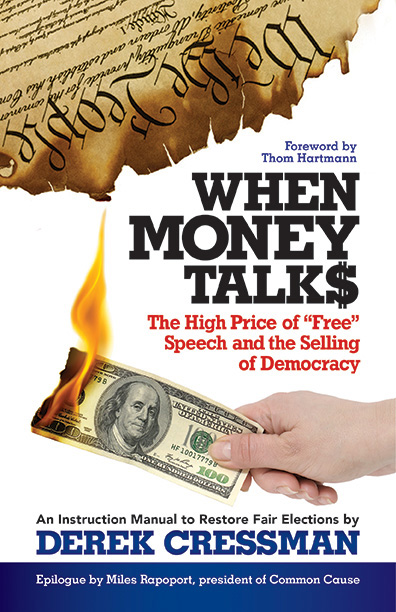 The American Revolution was fought to abandon the rule of monarchy and the outworn concept of the divine right of kings. The Declaration of Independence eloquently established that the sole justification for a democratic government’s authority is that it rules by consent of the governed. This doesn’t mean everyone agrees with every law, but a majority of citizens should.

For a governing majority to be legitimate, it must be a majority of citizens who each have an equal say.
An oligarchy does not operate by majority rule. Rather, an elite group rules by force, manipulation, or deceit. Although modern Russia goes through the motions of conducting elections, the centralized control of the media, business, and political party apparatus in the hands of a small elite has led many to conclude that Russia is an oligarchy, not a democracy.

So elections, on their own, do not guarantee a democratic republic.

But what about the United States? Are we really a democratic republic that derives its authority from majority consent of the governed?

As far back as 1994, three-quarters of survey respondents agreed that “our present system of government is democratic in name only.” Perceptions aside, the problem has been getting worse over time as measured statistically. Using statistical analysis comparing the votes of legislators with the wishes of both constituents and extremely wealthy people, a researcher from Princeton found that economic elites and business interests have “substantial” impact on government policy in the United States while average citizens have “essentially no impact.” Similar academic research has found that Congress followed the wishes of the majority of Americans 40 percent of the time in 2000, which was down from about two-thirds of the time in 1980.

We are conducting elections, but not under conditions that allow for a diversity of viewpoints and opposition to be heard. In other words, the United States now more closely resembles an oligarchy, where the wealthy minority rules, than a representative democracy of one person, one vote.

Copyright (2016) by Derek D. Cressman. Not to be reprinted without permission of the publisher, Berrett-Koehler.

Derek D. Cressman is a veteran political reform advocate and author of When Money Talks, an instruction manual to restore fair elections.