Problem: Your right-wing brother-in-law is plugged into the FOX-Limbaugh lie machine, and keeps sending you emails about “Obama spending” and “Obama deficits” and how the “Stimulus” just made things worse.

Solution: Here are three “reality-based” charts to send to him. These charts show what actually happened. 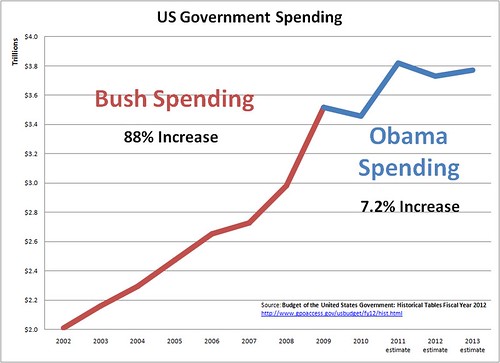 Government spending increased dramatically under Bush. It has not increased much under Obama. Note that this chart does not reflect any spending cuts resulting from deficit-cutting deals. 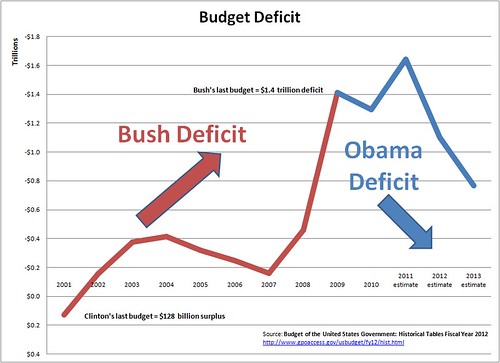 The numbers in these two charts come from Budget of the United States Government: Historical Tables Fiscal Year 2012. They are just the amounts that the government spent and borrowed, period, Anyone can go look then up. Peoplewho claim that Obama “tripled the deficit” are either misled or are trying to mislead.

The Stimulus and Jobs 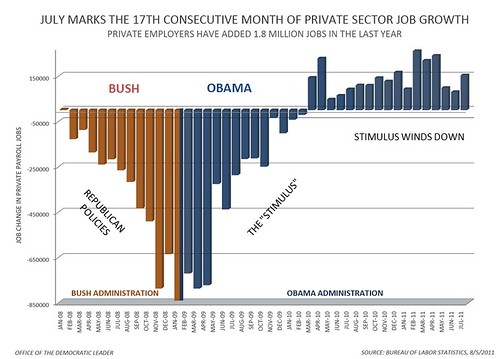 In this chart, the RED lines on the left side — the ones that keep doing DOWN — show what happened to jobs under the policies of Bush and the Republicans. We were losing lots and lots of jobs every month, and it was getting worse and worse. The BLUE lines — the ones that just go UP — show what happened to jobs when the stimulus was in effect. We stopped losing jobs and started gaining jobs, and it was getting better and better. The leveling off on the right side of the chart shows what happened as the stimulus started to wind down: job creation leveled off at too low a level.

Conclusion: THE STIMULUS WORKED BUT WAS NOT ENOUGH!

These are just three of the false things that everyone “knows.” Some others are (click through): Obama bailed out the banks, businesses will hire if they get tax cuts, health care reform cost $1 trillion, Social Security is a Ponzi Scheme or is “going broke”, government spending “takes money out of the economy.”

These things really matter. We all want to fix the terrible problems the country has. But it is so important to know just what the problems are before you decide how to fix them. Otherwise the things you do to try to solve those problems might just make them worse. If you get tricked into thinking that Obama has made things worse and that we should go back to what we were doing before Obama — tax cuts for the rich, giving giant corporations and Wall Street everything they want — when those are the things that caused the problems in the first place, then we will be in real trouble.