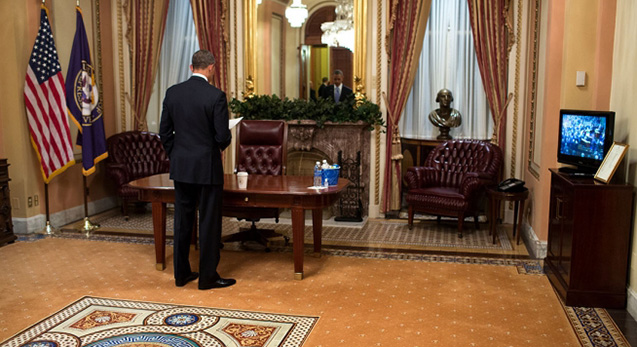 President Barack Obama reviews his speech one last time while waiting in a room at the U.S. Capitol prior to delivering the State of the Union address in the House Chamber in Washington, DC, January 28, 2014. (Photo: Pete Souza / White House)

The President of the United States gave the annual State of the Union address on Tuesday night, and if you ask the right people, they’ll tell you it was well and truly a barn-burner. President Obama dropped so many left-leaning, frown-inducing lines on the Republicans arrayed before him that Speaker Boehner, visible over the president’s shoulder, changed hues from his standard orange to alarming red to call-the-paramedics purple on several notable occasions.

Rep. Steve Stockman (R-TX) stormed out of the chamber before the speech was finished. Rep. Randy Weber (R-Also TX) sent out a Tweet calling Mr. Obama the “Kommandant-In-Chef” before the speech even began. After the speech was over, no less than four Republican members of Congress – plus Ron Paul, who threw his two bent cents in for good measure – rose up to offer rebuttals, each of which went in their own merrily deranged direction, serving to underscore the shattered state of today’s GOP. It was the Sybil Syndrome on network television, with neckties and Jesus thrown in to boot.

If you’re not a fan of the Republicans in Congress, which you probably aren’t according to all available polling data, it sounds like Tuesday was a pretty great night. If you deal with politics the way those little skimmer summer bugs deal with the surface of your favorite lake, it was. The president talked about income inequality, job creation, environmental protection, education, women’s rights, voting rights, health care, and the warfare industry. Mr. Obama hit all the g-spots, and made it sound like he was just the guy to get it all done.

But then, if you’re smart, you read the damned speech in detail…and if you did, like as not you have some serious questions to ask.

Questions, for example, like why Mr. Obama spent a good portion of his speech sounding for all the world like an Occupy Wall Street protester before turning on a dime to bend his knee to the failed religion of free-market economics. He did not say the words “Trans-Pacific Partnership.” He did, however, say this: “Over the past five years, my administration has made more loans to small business owners than any other. And when ninety-eight percent of our exporters are small businesses, new trade partnerships with Europe and the Asia-Pacific will help them create more jobs.”

Moles burrowed deep underground know by now that he wants that trade deal, and wants Congress to give him fast-track authority to get it done as soon as possible, despite the fact that the whole thing has been negotiated in secret, and will be, if ratified, caustic to American jobs in general, labor rights, environmental protections and human rights across the board. The Trans-Pacific Partnership, like its smaller cousin NAFTA, will not “create more jobs” as the president said Tuesday night, but will suck jobs out of the country and send them flying overseas. Again.

And then there is the question of why the president sounded like a Greenpeace activist when discussing environmental protections, before turning on a dime once again to promote a gas-mining practice called “fracking” that has already done lasting pollutive damage to communities all across the country. There are places in America, right this very minute, where you can light the tap water on fire because of the residue left over by this practice. A number of other countries have banned the process outright, but on Tuesday night, the president of the United States was hats-over-the-windmill thrilled by the prospect of spreading fracking far and wide. “In a fact sheet accompanying the speech,” noted The Hill on Wednesday morning, “the White House called on Congress to establish ‘sustainable shale gas growth zones.'”

Fracking is not sustainable. I guess that didn’t make it into the notes for the speech. Can’t imagine why.

And as we’re on the subject of the environment, there’s this state on the Eastern seaboard called West Virginia that Mr. Obama is president of along with the other 49. A company called Freedom Industries dumped poison into the water supply – two separate and distinct poisons, as it turns out – and left 300,000 people, their businesses, their schools, their hospitals, their retirement homes, without water to drink or bathe in or cook with for days and days and days.

According to Industry Specialists, the water is safe to drink now…but here’s the funny part: the poison(s) that got dumped into the water supply have a funny way of breaking down into formaldehyde after a time, which they now have, and so all those West Virginians who had to avoid drinking the water are now drinking and cooking with and showering in – read “ingesting and breathing in” – a known carcinogen, and no one seems to be dealing with it. The president made no mention of that state, those citizens, or the industry that poisoned the water in the first place. If there is right now a better example of why we need stricter environmental regulations to protect the American people from these kinds of incidents, I’m not aware of it…and the president gave it a miss.

So three cheers to the wonderful rhetoric Mr. Obama devoted to the environment in his speech on Tuesday night. So long as you ignore the hazards of fracking, and ignore entirely the state of West Virginia (mission accomplished, Mr. President), he sounded for all the world like a true green hero. And since he also didn’t mention the Keystone XL pipeline, we all get to wait to find out if he’s going to green-light a fragile tube that will transport the dirtiest oil available on Earth across America’s breadbasket and over our most vital water aquifer.

And then…and then, there was Cory Remsburg, the last invited guest Mr. Obama made note of. Remsburg, an Army Ranger, was injured by a roadside bomb in Afghanistan during his tenth deployment.

Cory Remsburg rose up before that parliament of whores, disfigured, maimed for life, and was duly recognized for his service and devotion to country. He received a deafening ovation from a room filled with the worst people in the country, many of whom voted over and over again to send him back to war ten times over, who cheered so loudly to cover over their shame…including the president himself, whose Afghanistan “surge” played its own part in putting Cory Remsburg in the path of the bomb that left him barely able to stand, blind in one eye, and forever damaged.

The President of the United States made no mention of the insanity of any soldier having to endure ten deployments, made no mention of the concept of actions and consequences, even as he stood before the loudest microphone on the planet. Perhaps he and his people thought the face of Cory Remsburg said it for him, and if so, that is another sorry example of the eleventy-dimension chess being played by an administration which is trying to run a country that only knows, politically, how to play checkers.

There are times when real leaders have to say things out loud into microphones, even when those things are so obvious that they bleed on the pavement. What happened to Cory Remsburg was wrong. It was, in fact, a crime, a long act of profiteering that has fed tens of thousands of men and women like him into the meat grinder, to be spat out into a VA system that is utterly overwhelmed and paralyzed before the avalanche of bodies it is tasked to help.

Instead, Mr. Obama said this: “My fellow Americans, men and women like Cory remind us that America has never come easy. Our freedom, our democracy, has never been easy. Sometimes we stumble; we make mistakes; we get frustrated or discouraged. But for more than two hundred years, we have put those things aside and placed our collective shoulder to the wheel of progress…”

We have put those things aside? Cory Remsburg, and the tens of thousands of soldiers who share his damage, cannot put those things aside. Mr. Obama turned that soldier’s plight into a pep rally for the country that fed him to the bomb that almost killed him. “Sometimes we stumble; we make mistakes” was the only apology that ravaged Ranger got from his Commander in Chief. He deserved far more than that, as do all the men and women not lucky enough to get applause from Congress on television.

It is easy peasy for politicians to talk about putting difficult issues “aside,” out of mind, away. That’s the bread and butter of the Teflon not-my-problem political hack. Leaders, real leaders, address those difficult issues head-on. They challenge we the people to take them head-on, as well, and that is how we heal and rise and move on. That did not happen on Tuesday night. Again.

If you ask the right people, they’ll tell you it was a great speech.

“Between the idea and the reality,” said a poet, “falls the Shadow.”

It’s the sugar that makes the poison taste sweet.

Share
Copyright, Truthout. May not be reprinted without permission.
William Rivers Pitt