Jennifer Steinhauer’s piece (11/27/12) is a tribute mostly to Lieberman’s close bond with Republicans John McCain and Lindsey Graham. The “Three Amigos” traveled the world together, advocating for one hawkish foreign policy idea after another:

Their hawkish world views often placed them at odds with their respective parties, but together they secured a place at the center of every major foreign policy debate.

That’s mostly true of Lieberman, but it’s hard to figure how McCain and Graham much stood out from the Republican pack. But apparently Lieberman’s absence will make life more difficult for them:

Though he frustrated many Democrats with his interventionist ideas, Mr. Lieberman gave Mr. McCain and Mr. Graham, both Republicans, a veneer of bipartisanship that lent credibility to their policy goals.

The Republican duo has already found a Lieberman replacement–Republican Kelly Ayotte–but things may never be the same:

The question is whether the group, whose profile rose after the Sept. 11 attacks, will be able to maintain an influential voice without Mr. Lieberman or will become isolated on an island of partisan poking.

Partisan poking aside, the real question one might want to ask about three hawkish politicians’ foreign policy views is whether they’ve shown good judgment. On that the Times mostly punts; the only real example that’s treated with any depth is their decision to support a troop surge in Iraq:

The three men became even more powerful in 2007 as President George W. Bush pursued his “surge” strategy in Iraq. The Republicans had just lost the House and the Senate, in no small part because of the Iraq war, and both parties were highly skeptical of the president’s decision to double down on troop levels in Iraq under General Petraeus. Mr. Lieberman’s pressure on the Senate floor day after day helped prevent an earlier withdrawal sought by many Democrats.

In case you’re wondering, prolonging the Iraq War was a good thing, says the Times: “The success of the operation earned them further respect among their colleagues.” That’s long been a corporate media truthism–the surge worked. Reality is more complicated, and a lot bloodier. 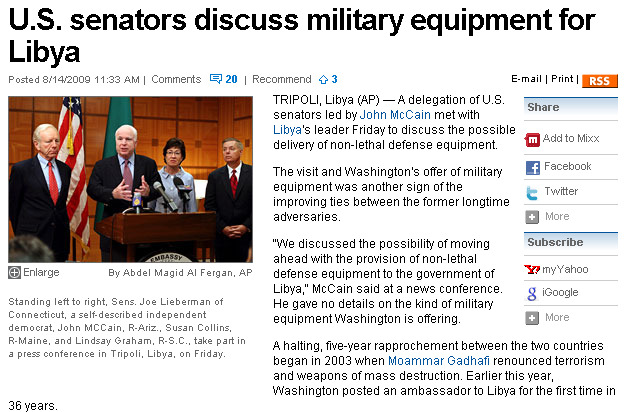 If we’re talking about the trio’s foreign policy, and we take as a fact that they have been “at the center of every major foreign policy debate”–certainly true if you count McCain’s frequent media appearances– then shouldn’t we evaluate the policies they have advocated? Being supportive of every U.S. war or arguing in favor of more militarism in virtually every case isn’t evidence of any particular expertise.In the cases of Iraq and Afghanistan, the results have been disastrous.

Or consider Libya; not long before Qaddafi was once again labeled the brutal dictator of a pariah state, the “Three Amigos” were in Tripoli talking about how to deliver him military assistance.

The Times talks about how their hawkish foreign policy “suddenly had deeper resonance” after the 9/11 attacks. For some, perhaps; but now seems as good a time as any to critically evaluate these positions, especially since Joe Lieberman’s retirement doesn’t mean we’ve seen the end of them.

And it’s a safe bet that vocal congressional advocate for peace Dennis Kucinich won’t get a similar send-off from the New York Times.