“Americans, in particular, have seemingly become addicted to the state of war, in part, due to our desensitization at the hands of the media we consume. From video games glorifying killing, to twenty-four hour coverage of conflicts, to real time video of smart bombs dropping down chimneys; we have an endless supply of stimuli to numb ourselves. The pain and suffering endured by others becomes nothing more than flickering images on a screen.” – Dominic Sansone, artist

Dominic Sansone is a cast and industrial-fabrication sculptor concerned about militarized and cultural violence. His background is unusual, as described on his website: “After completing his BFA studies, he spent two years working for an aerospace company producing fabrication and assembly drawings for satellites, military aircraft and mobile artillery units.”

It is this rare combination of artistic skill and postgraduate military-industrial-complex employment that gave birth to his exhibition “American Dream: God, Guns, & Drones,” which was shown from February through March 2015, at the Dittmar Memorial Gallery at Northwestern University in Evanston, Illinois.

Focusing on the overwhelming presence of violence, domestic and abroad, “American Dream” questions how desensitization has given way to apathy and fascination with violence. These visually stunning sculptures call attention to the dangers and peculiarities of living in a society that profits and thrives on violence and bloodshed.

That theme was most symbolically evident in a corner space of the gallery, where Sansone had placed a gilded replica of an AK-47 on the wall with rows of child-size worshippers on the floor. Sansone explained to Truthout – during a personal tour of the exhibition – his concept of how an assault rifle can assume the role of a “Brand New God,” the title of the work: 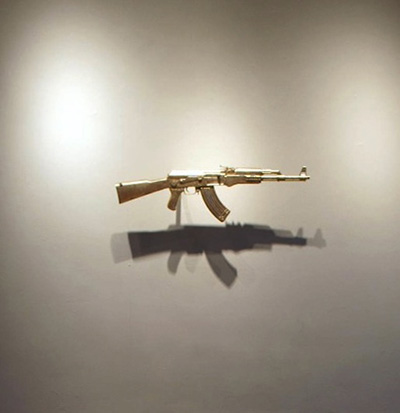 “Brand New God” by Dominic Sansone (worshippers not seen in photo). (Photo: Dominic Sansone.)The yoga position [of the rows of worshippers of the AK-47, not seen here but arranged in rows in front of the gun] was chosen primarily to avoid singling out any one religious creed. I take great care to ensure that the presentation of this is indicative of all races and religions. The figures are even sexless. So the yoga pose was a means of showing supplication to the assault rifle included as part of this installation, without implying a specific religion. 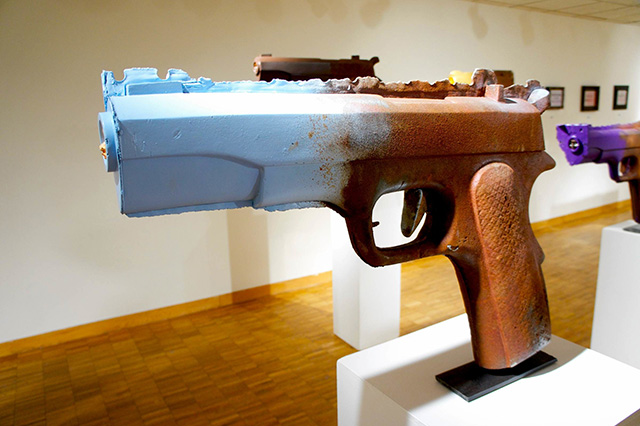 For every handgun, there is a victim. (Photo: Dominic Sansone)

Sansone’s ominous vision is quickly apparent. Cast from Styrofoam, a series of large-scale handguns shoot into the vision of viewers as they enter the display space.

Sansone has inserted faces of various colors into the end of each gun barrel. Are the faces meant to symbolize that each bullet in a gun has a human target? Sansone is coy about the answer to that question, indicating that it is up to the viewer to decide. Yet, as I looked at the barrels of the giant handguns pointed in my direction, it was hard not to palpably feel that threat. The massive size of the firearms symbolically evoked their power to end lives. 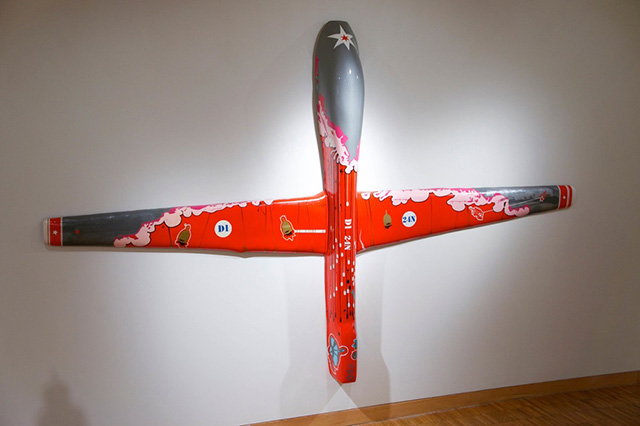 Given Sansone’s military high-tech equipment design experience, it is not surprising that drones are a key part of this art show. A fabricator of prototype weapons has experienced how inexhaustibly new technology can facilitate killing. If handguns represent a way to shoot someone at close range (resulting in about 10,000 homicides a year in the United States), the drone has emerged as the exemplar of how a “pilot” stationed thousands of miles away from the “kill site” is able to cause death.

Sansone views drones as the modern-day solution to make military killing more remote and less visible, thus making it less politically and culturally disturbing. The artist reflects on his website:

The “antiseptic” nature of drone use in the military makes killing an all too impersonal event. An actual missile strike on a civilian target can too easily become just another video game accomplishment for a technician sitting in a darkened room, half a world away. Killing moves even further towards a casual event with little psychological ramifications.

A large, primarily fire-engine-red drone – with a huge wingspan and whale-like gray nose cone – dominated the center of the rear wall of the exhibit. As with the sanctification of the gold-covered AK-47 and its worshippers, this particular drone – in its size and placement – again evokes the notion of religion, in this case the crucifix. Sansone told Truthout that he,

Put this representation of an inanimate killing machine into a position of reverence, centered on a blank wall, blasted with light.

Why does it invoke the crucifix? That’s a function of its basic shape. The Predator is essentially a big flying cross. One of my grandmothers had a lot of religious iconography around her home (I was raised Catholic) and things like a floating, glowing crucifix weren’t out of the question. Look at the parallels this piece of modern technology has with the idea of God: It has a cross shape; it flies; it deals out death (with a weapon called a “Hellfire” missile of all things); we look on it with awe; it’s wrapped in mystery and secrecy. It’s like an Old Testament God. Fire and brimstone for the jet age. 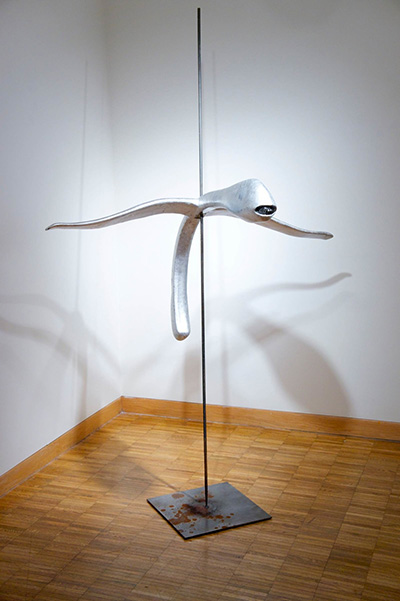 A shark drone gets impaled. (Photo: Dominic Sansone)Nearby is a sinuous silver drone impaled on a long construction rod. The artist translated and explained the title of the piece, “Insidie del Diavolo”:

Insidie del Diavolo is an Italian translation of a line from a prayer to St. Michael. It translates as “wiles of the devil.” The English version I learned as a kid is “snares of the devil.” Do an image search for St. Michael the Archangel and most of the results are him standing on a prostrate Lucifer ready to pierce him with a sword or spear…. In this piece, the drone form takes on the dual role of Lucifer and Michael. The [construction rod] becomes the spear.

With its teeth that evoke a shark, it appears to be a stylized predator fish that becomes impaled: the paradox of a destroyer drone – a weapon touted as a “just avenger” by politicians – but whose very construct and mission of assassination make it morally repugnant. 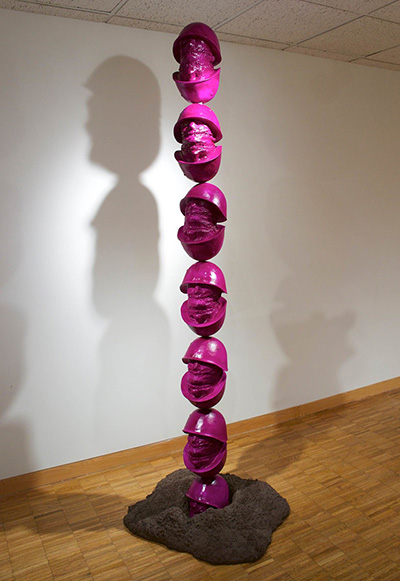 Disfigured soldiers. (Photo: Dominic Sansone)The reality of a culture infused with violence is suggested by a tower of helmeted soldier heads, the skin of their faces melting down to bone, near the front of the exhibit.

Sansone explains in his biography on his website: “Ultimately my body of work is born of my own identity and my response to it as a former member of the military industrial complex and having grown up during the height of the Cold War in the 1980’s.” He emphasized to Truthout that he considered himself an artist, not an activist: His imaginative work, when combined in “American Dream: God, Guns, & Drones,” is a way of bearing witness:

When I was working at that company, I made terrible pay (unfortunately it’s even worse as an artist); I was completely miserable and it was a means to an end. It was a way to pay my credit card bills and car insurance, buy my future wife an engagement ring, but it was mind-numbingly, soul-crushingly boring. It wasn’t until eight years later when I was on the verge of becoming a father for the first time and we were six years into Afghanistan and four years after the infamous “Mission Accomplished” moment that I began to reflect differently on my past. There was a moment where I said to myself, “Oh hey, you’ve indirectly been a part of killing huge amounts of people.”

That leads to a reflection on human nature in 2015, particularly in the United States. Sansone stated to Truthout:

I think expressing God in the idea of this exhibition was more nuanced. There wasn’t any one piece that said, “This is about God!” As a whole, the exhibition is about the worship of violence and weapons. I’m looking to transform the gallery space into some perverse church filled with false idols….

For a month, the exhibition “American Dream: God, Guns, & Drones” transformed a gallery space into a chapel. Sansone created a troubling sanctuary for a shared national acceptance of carnage.