By education group, the big winners were people with some college, who saw 1.2 percentage-point increase in their EPOP. There was little change in the EPOPs for other groups. Workers over age 55 continued to fare best, accounting for 178,000 of the 541,000 increase in employment. Women over age 55 accounted for 140,000 of these jobs.

In addition to the gains in employment, the household survey also showed a sharp fall in the number of people involuntarily working part-time, from 9,055,000 to 8,193,000. The U-6 measure of labor market slack correspondingly fell from 17.3 percent to 16.5 percent. It is also worth noting that the percentage of the unemployed who have voluntarily quit their job has edged up to 6.1 percent. This is still very low, but somewhat better than the 5.6 percent reported last summer, suggesting somewhat greater confidence in the labor market.

The establishment data look somewhat less positive. Not only do the data continue to show job loss, but the job loss over the last three months (Oct-Dec) was revised upward by 102,000, giving an average job loss of 103,000 per month over this period. Without 33,000 temporary census jobs, the establishment survey would have shown a loss of 53,000 jobs for January.

Retail trade added 42,100 jobs, although this may be a seasonal anomaly with fewer people than normal hired in the holiday season and therefore fewer layoffs in January. Employment services showed another big increase, adding 52,000 jobs in January. This is consistent with a picture of employees getting ready to add permanent employees. Hours worked also increased, with the index of aggregate hours rising from 97.9 to 98.2. 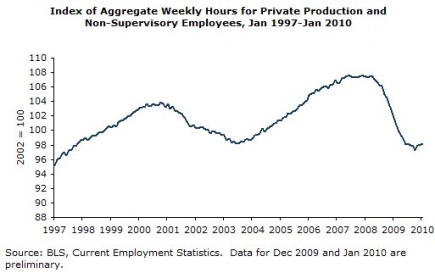 However, there were also many negative aspects to the establishment data. Construction lost another 75,000 jobs, the vast majority in non-residential construction. State and local governments shed 41,000 jobs. The leisure and hospitality sector shed 14,000 jobs. Even health care seems to be weakening as a bastion of employment growth, adding just 14,500 jobs in January.

On the whole, there is some positive news in this report, with the household survey showing a much brighter picture than the establishment survey. It is possible that the birth/death data could now be understating job growth. Dean

Baker is the Co-director of the Center for Economic and Policy Research. CEPR’s Jobs Byte is published each month upon release of the Bureau of Labor Statistics’ employment report. For more information or to subscribe by fax or email contact CEPR at 202-293-5380 ext. 102, or chinku [at] cepr [dot] net. Dean Baker is a member of the Truthout Board of Advisers.