When the going gets tough, the people losing the argument start whining about civility. I often find myself attacked as someone who believes that anyone with a different opinion is a fool or a knave. As I’ve tried to explain, however, this is mainly about selection bias. I don’t spend much time on areas where reasonable people can disagree, because there are so many important issues where one side really is completely unreasonable.

Obviously someone can disagree with my side and still be a good person. On the other hand, there are a lot of bad people engaged in economic debate – and I don’t mean that they’re wrong; I mean that they’re arguing in bad faith.

Which brings us to today’s installment of oh-yes-they’re-that-bad, courtesy of Bloomberg. You may remember the infamous open letter from 2010 addressed to Ben Bernanke, then chairman of the Federal Reserve, warning that his efforts to boost the economy “risk currency debasement and inflation.” Just in case you were wondering about the political nature of the letter, among the 23 signatories was that noted monetary expert William Kristol, editor of the conservative Weekly Standard. 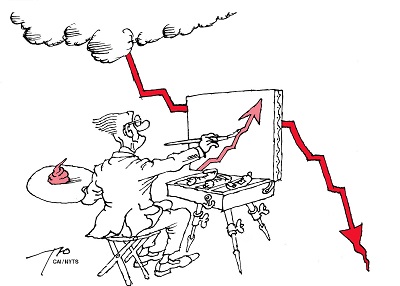 (Image: TUNIN; Russia / CartoonArts International / The New York Times Syndicate)Earlier this month, reporters at Bloomberg had the bright idea, now that almost four years of low inflation have passed, of asking the signatories whether they would concede that they were wrong. Not a chance. Hey, they only said there was a “risk” of inflation, and the economy hasn’t done well, so it’s all good!

Just to say the obvious: If inflation had in fact risen, they would have claimed vindication. So it’s heads they win, tails they don’t lose.

And this is far from the only example of inflationistas and bond worriers bobbing and weaving, refusing to acknowledge having said what they said and being completely unwilling to admit mistakes.

I try hard not to behave that way. If I make a mistake – like my extreme pessimism about the short-term survival of the euro, or my warnings back in 2003 about a debt crisis in the United States – I try to admit it, and figure out why I was wrong. No doubt there have been times when I rewrote history to make myself look better, but I try to avoid that – it’s a major intellectual and moral sin.

And, boy, are there a lot of sinners out there.