UPDATE: I spoke about this issue with Nicole Sandler on the Nicole Sandler Show. That discussion is here. Start the player, then advance to 26:54 to hear our segment. Thanks.

Does the planned November 2013 removal of the spent fuel rods stored at Fukushima’s heavily damaged Reactor 4 need a global intervention, or should TEPCO (Tokyo Electric Power Co., a for-profit company) be allowed to go it alone?

So far, the Japanese government is allowing TEPCO to handle it. Why should you care? Read on.

As you should know by now, the nuclear power plant at Fukushima underwent a great deal of damage in 2011 due to an earthquake and a tsunami. Wikipedia (my emphasis; some reparagraphing):

The plant comprised six separate boiling water reactors originally designed by General Electric (GE) and maintained by the Tokyo Electric Power Company (TEPCO). At the time of the earthquake, reactor 4 had been de-fueled and reactors 5 and 6 were in cold shutdown for planned maintenance.

Immediately after the earthquake, the remaining reactors 1–3 shut down the sustained fission reactions automatically, inserting control rods in what is termed the SCRAM, following this, emergency generators came online to power electronics and coolant systems. The tsunami arrived some 50 minutes after the initial earthquake.

The 13m tsunami overwhelmed the plant’s seawall, which was only 10m high, quickly flooding the low-lying rooms in which the emergency generators were housed (The tsunami was photographed). The flooded diesel generators failed, cutting power to the critical pumps that must continuously circulate coolant water through a Generation II reactor for several days to keep it from melting down after shut down.

After the secondary emergency pumps (run by back-up batteries) ran out, one day after the tsunami, the pumps stopped and the reactors began to overheat due to the normal high radioactive decay heat produced in the first few days after nuclear reactor shutdown (smaller amounts of this heat normally continue to be released for years, but are not enough to cause fuel melting).

We want to focus on reactor unit 4. Here’s a schematic of what one of these reactor units looks like (skillfully designed by GE, who wants you to know they “bring good things to life”): 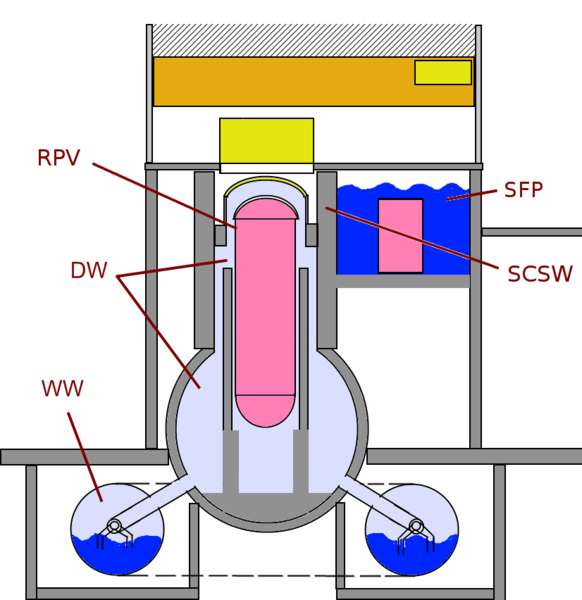 What you care about is ” SFP,” where the fuel rods are stored. Here’s the legend provide with this sketch:

Rough sketch of a typical Boiling water reactor (BWR) Mark I Concrete Containment with Steel Torus including downcomers, as used in the BWR/1, BWR/2, BWR/3 and some BWR/4 model reactors.

Notice where the fuel rods are stored — high off the ground and in water, in the area marked SFP. 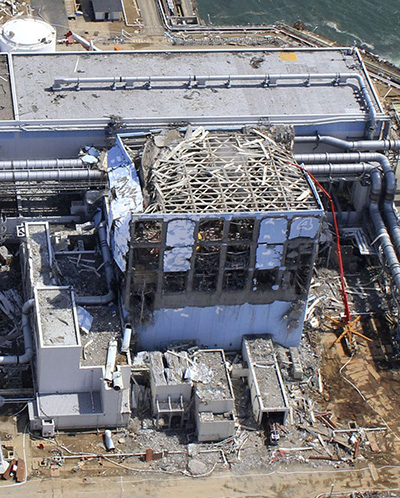 Notice that it has no roof. The spent fuel rods (and about 200 “fully loaded” unspent rods — remember that “reactor 4 had been de-fueled” prior to the accident) are stored in a water-containing chamber high off the ground in a crumbling room and building without a roof.

How will “they” get the damaged fuel rods out of that crumbling room?

This is the problem today. There are about 1300 fuel rods stored in that room, packed together vertically in racks. Think of a pack of cigarettes standing upright with the top of the pack removed. Normally, the movement of fuel rods is done by a computer-driven machine that reaches into the room from above and removes or replaces a fuel rod by drawing it upward or lowering it downward.

The machine knows to the millimeter where each fuel rod is located. Also, the rods are undamaged — perfectly straight.

The problem is that this pack of cigarettes is crumpled, and the process must done manually. Therefore, the likelihood that some of the fuel rods will break is high. If that happens and fuel rods are exposed to the air — BOOM. What does “boom” look like?

Fukushima’s owner, Tokyo Electric (Tepco), says that within as few as 60 days it may begin trying to remove more than 1300 spent fuel rods from a badly damaged pool perched 100 feet in the air. The pool rests on a badly damaged building that is tilting, sinking and could easily come down in the next earthquake, if not on its own.

Some 400 tons of fuel in that pool could spew out more than 15,000 times as much radiation as was released at Hiroshima.

Meanwhile, at the rest of the site:

More than 6,000 fuel assemblies now sit in a common pool just 50 meters from Unit Four. Some contain plutonium. The pool has no containment over it. It’s vulnerable to loss of coolant, the collapse of a nearby building, another earthquake, another tsunami and more.

Overall, more than 11,000 fuel assemblies are scattered around the Fukushima site. According to long-time expert and former Department of Energy official Robert Alvarez, there is more than 85 times as much lethal cesium on site as was released at Chernobyl.

If the whole site blows, “boom” could mean the release of 85 times as much radioactive cesium into the air as was released at Chernobyl. Into the air. Into a stiff cross-Pacific breeze.

There are a number of people warning of this danger; none are getting much play. For example, this from the Japan Times (quoted here):

In November, Tepco plans to begin the delicate operation of removing spent fuel from Reactor No. 4 [with] radiation equivalent to 14,000 times the amount released by the Hiroshima atomic bomb. …. It remains vulnerable to any further shocks, and is also at risk from ground liquefaction. Removing its spent fuel, which contains deadly plutonium, is an urgent task….

The consequences could be far more severe than any nuclear accident the world has ever seen. If a fuel rod is dropped, breaks or becomes entangled while being removed, possible worst case scenarios include a big explosion, a meltdown in the pool, or a large fire. Any of these situations could lead to massive releases of deadly radionuclides into the atmosphere, putting much of Japan — including Tokyo and Yokohama — and even neighboring countries at serious risk.

A lot depends on what blows up, if anything. If only Unit 4 blows up, Japan is at risk, including Tokyo, and the nuclear dust will pass across the Pacific to the U.S. People on the West Coast will be warned to keep their windows closed for a while.

If the whole facility blows up, one scientist is talking about moving her family to the southern hemisphere. From the article quoted above:

Chernobyl’s first 1986 fallout reached California within ten days. Fukushima’s in 2011 arrived in less than a week. A new fuel fire at Unit 4 would pour out a continuous stream of lethal radioactive poisons for centuries.

We’re in very apocalyptic territory, with a wide and unknown range of outcomes. Take that for what it’s worth — little could go wrong, or much.

Should TEPCO be allowed to attempt this on its own?

Should Japan be allowed to attempt this on its own?

This is the heart of today’s problem. In reality, the events that are about to unfold at Fukushima in the next 60 days will affect much of the world. They could in fact change life in the northern hemisphere, if the worst of the worst occurs.

The Japanese government has ceded control of the next phrase — removing more than 1300 fuel rods from Reactor 4 — to TEPCO. (Seems that Japan has a “corporate capture of government” problem similar to our own.) Reuters (quoted here):

Tokyo Electric Middle East or Latin America who bother us. Yet some writers are in fact worried that the consequences for Japan include bankrupting the economy and … loss of sovereignty. Japan Focus:

This is literally a matter of national security – another mistake by TEPCO could have incredibly costly, even fatal, consequences for Japan.

And according to former U.N. adviser Akio Matsumura (quoted here):

The meltdown and unprecedented release of radiation that would ensue is the worst case scenario that then-Prime Minister Kan and other former officials have discussed in the past months. He [Kan] warned during his speech at the World Economic Forum in Davos that such an accident would force the evacuation of the 35 million people in Tokyo, close half of Japan and compromise the nation’s sovereignty.

That’s then-Prime Minister Kan quoted in the bolded comment. As I said, it’s an interesting theoretical problem. Too bad it’s not just theoretical. This will all happen in November.

Bottom line — Should TEPCO be allowed to manage the removal of the fuel rods in November?

It comes down to this — TEPCO has shown itself to be both incompetent and deceitful. The government of Japan has shown itself willing to allow TEPCO to control the “cleanup” and “decommissioning” of the Fukushima facility.

Who should have control at Fukushima? TEPCO (after all, they “own it”)? The government of Japan (after all, it’s “their” country)? Or others in the world, acting in their own real interest? Harvey Wasserman, writing in Common Dreams (my emphasis and paragraphing):

We are now within two months of what may be humankind’s most dangerous moment since the Cuban Missile Crisis. There is no excuse for not acting. All the resources our species can muster must be focused on the fuel pool at Fukushima Unit 4. … Neither Tokyo Electric nor the government of Japan can go this alone. There is no excuse for deploying anything less than a coordinated team of the planet’s best scientists and engineers. …

We have two months or less to act. For now, we are petitioning the United Nations and President Obama to mobilize the global scientific and engineering community to take charge at Fukushima and the job of moving these fuel rods to safety.

If you have a better idea, please follow it. But do something and do it now. The clock is ticking.

I swear, the world is closer and closer to reading like a series of thrillers, isn’t it? I’m not sure what to make of all this; it seems so … thriller-y.

If you want to read more, your key articles (including lots of embedded links) are these:

▪ The Top Short-Term Threat to Humanity: The Fuel Pools of Fukushima [Washingtonblog; lots of links]

Guess we’ll find out in November whether this works out or not. In the meantime, I thought you should know that some people are having this discussion, even if it’s not happening on TV, yet. (Know anyone at MSNBC you’d like to alert? Feel free; you don’t need permission to talk to the media.)