Taina Asili – a vocal artist, poet and justice activist – is a founder of the Arts in Action Committee of Capital Area Against Mass Incarceration (CAAMI), a local anti-incarceration, anti-police violence and Black Lives Matter organization in Albany, New York. As CAAMI engages in an intense campaign of protests against the police tasering death of an Albany man, Asili is releasing a music video giving this passionate movement an anthem and a visual and visceral demonstration of the link between slavery and racial oppression today. The music video features the exuberant song “Freedom,” which celebrates resistance to racism, and a striking set of parallel scenes of a runaway slave and a young protester running from the police.

Truthout spoke with Taina Asili about the connections she has made for decades between art and justice, and why they are especially important now.

Naomi Jaffe: Taina, your ongoing project to bring the inspiration of your art to bear on the world of injustice always reminds me of the words of the great Black lesbian feminist poet, Audre Lorde, when she said, “Poetry is not a luxury.” Can you talk about why music and art are not luxuries for our anti-incarceration, anti-racist movements today?

Taina Asili: We are in a critically dangerous state in this country with over 2.2 million people behind bars in the United States – 60 percent being people of color – and police killings of unarmed people of color at epidemic proportions. We need to disseminate our message of resistance quickly, widely and effectively, and art has always been a powerful tool to do just that. With art, we change the narrative of what is happening in our world. As my fellow radical artist Favianna Rodriguez says, “The power of art is that it can ultimately transform what you see.” We have already seen the way the Black Lives Matter movement – using the power of social media, art and action – is changing the narrative in our country and in the world, bringing more visibility to the continued institutional racism Black people experience. Art is also an important way for us to move through the trauma of our oppression, and to find strength and courage to keep moving forward on the long journey to justice. 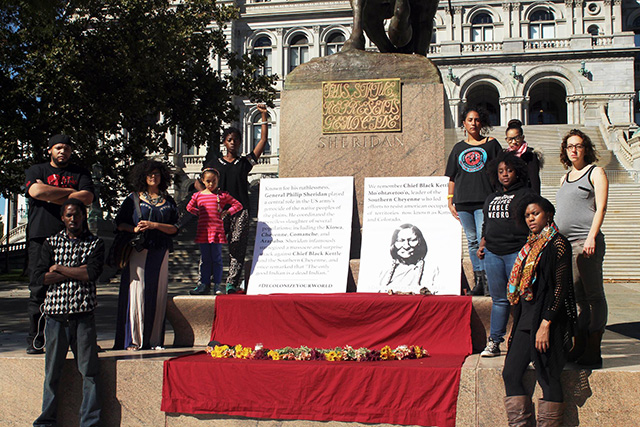 When and where did you start blending art and activism?

Latin jazz and Afro-Caribbean music played in my Puerto Rican household throughout my childhood years in upstate New York. My parents were talented artists, and were influenced by the resistance movements of their generation – including the Young Lords, Malcolm X and the Puerto Rican independence movement – to be critical thinkers about our world. In my teen years, I gravitated to the punk scene as a way of finding my own voice as a young woman of color, and for eight years, I wrote and performed songs of rage and resistance with my punk band, Anti-Product, touring the country many times and putting out records throughout the world. It was through the punk scene [that] I became aware of US political prisoners, as well as other movements, such as [the] environmental justice [movement], and where I began participating in demonstrations.

I moved from my small town in upstate New York to Philadelphia, and began working with Pam and Ramona Africa in the movement to free Mumia Abu-Jamal, the MOVE 9 and other political prisoners. It was a powerful training ground for community organizing, which I supported with my art every chance I could get. I have fond memories of performing alongside profound artists such as Sonia Sanchez, Ursula Rucker, Dead Prez and Immortal Technique at events, rallies and benefit concerts.

In 2007, I moved to Albany, New York, and formed Taina Asili y la Banda Rebelde, a fusion of my Puerto Rican upbringing and punk rebellion, and strongly influenced by the social justice movements I have been involved in over the past two decades. 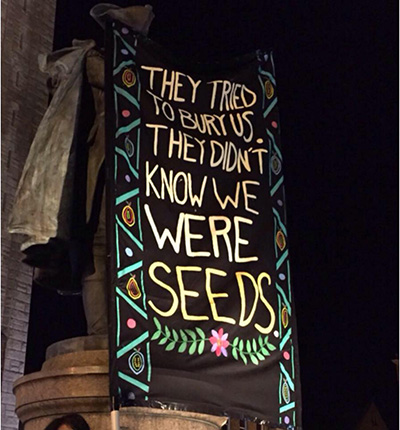 I am always impressed with how many incredible conscious artists we have in Albany, New York. Since moving to this area, it had been a dream of mine to find a way to bring our gifts together to strengthen the important movement work happening in our community. This year, I began working in CAAMI and created an art installation, an interactive community altar, for a vigil in response to the death of Sandra Bland. The response was strong, and it felt like the perfect time to begin to bring artists together, especially since there were many artists already involved in the organization. AIAC now includes a number of artists from across disciplines, including videographers, photographers, graphic designers, painters, musicians, poets and emcees.

Our first art action was in protest to Columbus Day 2015, which we titled #DecolonizeYourWorld. It was a community altar built in front of a statue at the Capitol [building in Albany, New York], to expose the many symbols of oppression, genocide and slavery in our community.

Our next action, held in November 2015, was in response to the police murder of Dontay Ivy, an unarmed Black man who was racially profiled and ultimately killed with a Taser. We held a 15-foot banner in front of Albany City Hall, which read, “They tried to bury us. They didn’t know we were seeds.” We also wore masks depicting people killed by the rampant state violence towards people of color throughout our country. Later on that month, we held this banner in solidarity with an event organized for Transgender Day of Remembrance. Our most recent action was #LightItUp, where we built a large sign made with letters made with Christmas lights, which read “Justice For Dontay Ivy.” We held this sign at public events sponsored by Albany’s mayor and police department, while singing songs of protest. 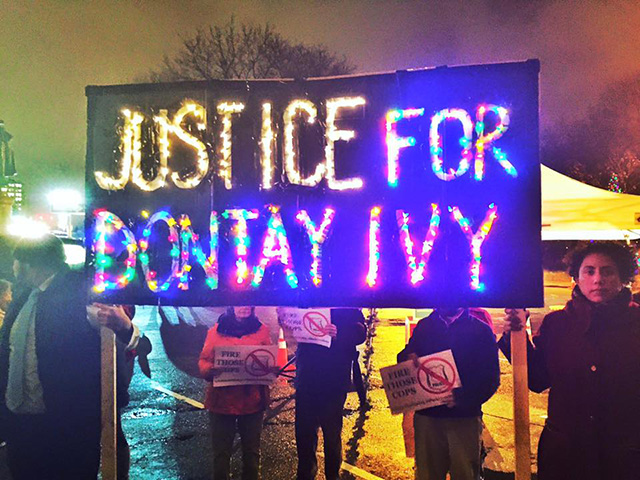 What do you see as the particular role, impact and leadership of artists of color in social justice movements? How is that manifested in CAAMI’s Arts in Action Committee?

“Representation is everything,” as my friend Sophia Smart of CAAMI says. In order for our work to be most effective, I believe it is essential for the voices of artists of color, especially those from communities most affected by incarceration and state violence, to be lifted. We speak, sing, paint our truth from our own authentic experience and carry it in a way that is relatable to our people. A core value of the AIAC is to maintain the voices and visibility of artists of color in the center of our work. 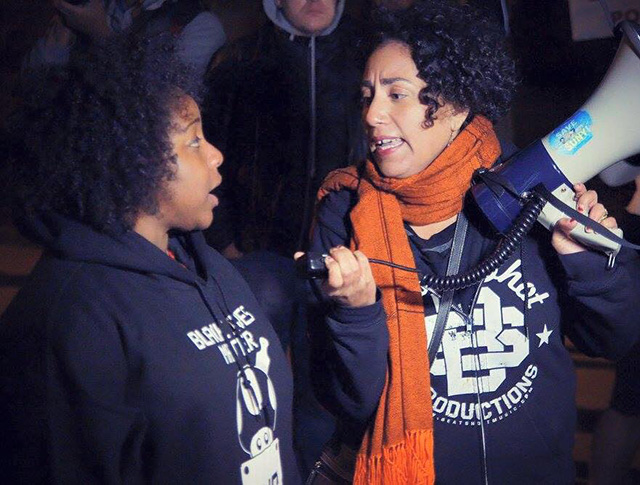 What do you see as the role of your new music video, “Freedom,” in the Black Lives Matter and anti-incarceration movements? How would you like to see it used to advance the cause of freedom?

My goal is for this music video to bring our message of recognizing the prison system as a product of institutional racism to a wider audience, and to encourage people to fight against mass incarceration. I also wish to remind those working on these issues that not only is our present oppression connected to our past, but so are our powerful movements of resistance. We walk on the path carved by those who escaped slavery on the Underground Railroad and every resistance movement before and after. We are guided by our ancestors and we will be free.

Share
Copyright, Truthout. May not be reprinted without permission.
Naomi Jaffe

Naomi Jaffe is a founding member of Capital Area Against Mass Incarceration and the New York State Prisoner Justice Network.