Hank Adcock’s family has farmed the rolling hills of this small town in Northern Alabama for more than a century. Adcock took over the farm from his father, who inherited it from his father. At 62, Adcock was planning to pass the 300 acres — where his family raises everything from peaches and plums to corn and tomatoes, along with 200 cows — to his two sons.

Then a brutal farming accident threatened to rip the farm from his family. As Adcock worked in the fields below his house on a summer day in 2015, he reached to clear a jam in the hay baler and his hand caught in its blades. Within minutes, the machine took two of his fingers and much of his palm.

In shock, bleeding, and alone, Adcock somehow worked the stick shift on his old 4×4 Sierra pickup with his mangled right hand and drove across his fields for help. Eventually, the bills for that help — the doctors, hospital care and medivac helicopter ride — exceeded $130,000. This would be enough to consume his family’s finances, and with them his farm.

In the end, Hank Adcock held onto his farm, with the help of an unexpected savior: the Affordable Care Act (ACA), often known as Obamacare. Six months before the accident, Adcock had purchased health insurance for the first time in his life — something the ACA made possible.

The coverage saved Adcock’s farm, he believes, because without it, he would have been forced to sell most of his acreage to pay his medical bills, leaving his two sons without enough land to make a living.

“It would just [have] been all over with,” Adcock recalled, as he sat on a bucket of hydraulic oil on the lip of his cavernous garage packed with tractors, engines suspended by chains, oil drums, parts, and mountains of tools. ACA “was the best thing that ever happened to us.”

The Adcock family’s story represents a stark reality that Republicans face as they work to replace the Affordable Care Act this spring. Calls to repeal and replace the act may make for good political theater, but theater does not necessarily reflect reality. Adcock lives in a county where 90 percent of voters supported Donald Trump, according to CNN, yet large numbers of his neighbors are signing up for Obamacare, he says.

These rural farmers and families, who, regardless of their politics, rely on ACA coverage, have not been onstage much during the political theater of the effort to repeal Obamacare and pass the American Health Care Act.

Their invisibility is symptomatic of a health care debate that seems driven by ideology and partisanship on both sides, not the voices and needs of the families with the greatest stake in the outcome.

Hank Adcock knows the poverty line because he has lived near it. Until two years ago, he had never purchased health insurance because the monthly premiums ranged between $1,000 to $2,000, enough to eat half or nearly all of the $24,000 to $25,000 a year he often made farming 10 to 12 hours a day. With those premiums, the family would have had little left.

With the Affordable Care Act, the premium for Adcock and his wife is $110 a month.

Under the plan proposed by House Republican leaders during the week of March 6, their premium would rise to roughly $1,150 a month, according to Doug Hoffman, an ACA navigator based in Birmingham.

Within 10 years, 24 more million people would be uninsured under the GOP plan than under current law, according to an analysis released on March 13 by the nonpartisan Congressional Budget Office. The plan also would cut the federal budget deficit by more than $300 billion over the same period, the office added.

Obamacare Catches on in Trump Country

In this Republican stronghold, Adcock’s neighbors may sign up for Obamacare but they don’t admit it partly because of the political stigma attached to an act that is seen as President Barack Obama’s signature achievement, he says.

The stigma, though, may be starting to fade.

As word spread among Nectar’s roughly 350 residents that they could buy health insurance for as little as $110 a month, Doug Hoffman’s phone started ringing. When the region’s ACA navigator answered those calls he tried to dispel the stigma. He also explained that many companies pay much of the health care premiums for their workers.

“Look, you don’t have an employer picking up half of your health costs, so you are having to pay the full freight. That is just not fair,” Hoffman, a former finance director at Birmingham Children’s Hospital, told farmers. “I had people come in who weren’t going to take Obamacare…for political reasons.”

After talking it over, some farmers changed their minds and signed up, Hoffman says.

This shift in Nectar may help explain why the nation’s view of the Affordable Care Act appears to be shifting. A majority of people viewed the act favorably in four recent polls, including one by Fox News, The New York Times reported. At town hall meetings with members of Congress, voters are standing up in support of it.

Rural families in places like Nectar are the tip of a political iceberg Republicans are trying to avoid as they work to repeal the ACA. During the week of March 6, Republican leaders introduced their plan to replace Obamacare, one they say ushers in modern reforms and expands access to quality health care. 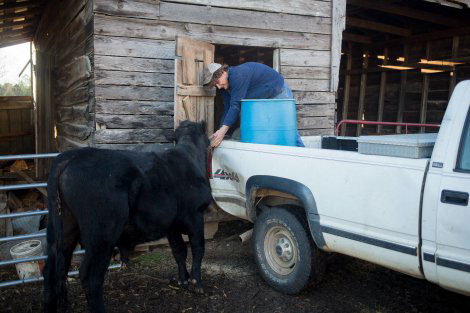 Hank Adcock’s son, James, 17, left, loads feed onto a truck on his family’s farm in Blount County, Alabama in February, 2017. (Photo: Mike Kane for Equal Voice News)It was promptly greeted with opposition and skepticism among some Republicans and Democrats. There is rising concern the plan would hurt poorer families by raising their costs, including older adults who live a bit above the poverty line — people like Hank Adcock.

If Congress will listen, Adcock says, the problem is clear. Something has to be done about the cost of health care. The Affordable Care Act reflects one attempt to address that problem, and he worries that whatever replaces it will push coverage once again out of his reach.

“I am worried they are going to get it where we can’t afford it again,” Adcock said. “Use judgement. Look at all the costs…That’s what I had to do.”

Common Ground, Not a Southern Strategy

Alabama is a deep red state that has historically been divided along racial lines, a divide that has been deepened by the “Southern Strategy,” under which the Republican Party has appealed to white voters in ways that pitted them against Black residents.

These divisions flared last year, when Alabama’s state Legislature reversed the city of Birmingham’s move to raise its minimum wage to $10.10 an hour. The state’s decision sparked an outcry and a lawsuit charging that the reversal disenfranchised the city’s Black voters. 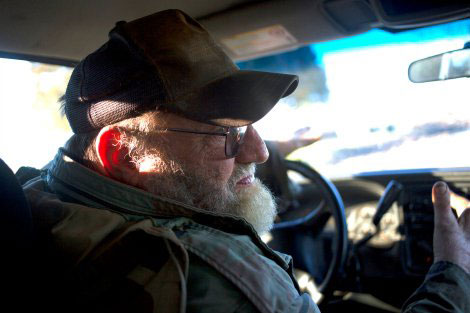 Hank Adcock on his farm in Blount County, Alabama in February, 2017. (Photo: Mike Kane for Equal Voice News)But change comes, if sometimes slowly, to Alabama. Here as across the country, the kitchen-table issues that low-income families worry about — putting food on the table; finding a good job; paying for health care — are at the heart of that change.

These complex realities of family life blur the stark partisan lines that characterize political discourse. Whether they identify as “red” or as “blue,” families from disparate backgrounds want the same basic things, such as access to medical care at a price that doesn’t leave them struggling to find money to feed the kids.

“There are issues like health care and education and jobs that resonate across every race and identity,” Hoffman, the ACA navigator who helps people find and enroll in health care plans, said.

“Health care trumps politics and racial divisions out there.”

Nectar is a town of mostly modest brick houses, farms and double-wide trailers, where families earn a median income of $35,000 a year. It is Trump country, like the rest of this largely rural state, which Trump won with 63 percent of the vote in November.

“This is where it all began; remember that incredible rally we had?” Trump told supporters in Mobile, Alabama during his December post-election tour, The New York Times reported. “People said something going on there, right? That was the beginning.”

“Now, in a certain way, the hard work begins,” Trump told that same crowd, according to the Times.

Less than three months later, those words seem prescient — at least on health care, where promises to repeal Obamacare are colliding with the reality on the ground.

Since the ACA’s passage in 2010, Alabama’s rate of uninsured residents dropped from 18 percent to 11 percent, Doug Hoffman said, even though the state turned down federal funding to expand its Medicaid coverage.

In Nectar, only nine percent of residents lack health insurance, according to a 2015 Census estimate. [It is unclear how many residents rely on the Affordable Care Act].

Hank Adcock continues to grow peaches, tomatoes, plums and corn, and raise calves in the barn next to his house. He is continuing the long-honored work of running a family-led farm. He is slowed by age, though, particularly pain in his hips, and his two sons have taken over much of the work in the fields.

“I will do what I can to keep [the farm] here, because I realize he’s put a lot into it to keep it here for me and my brother to inherit one day,” said James Adcock, his 17-year-old son. “I am going to try to do all I can to keep it myself, and hopefully [pass it on] to my kids one day.”

As Congress prepares to replace the Affordable Care Act, Hank Adcock hopes whatever comes next doesn’t do away with the policies that allowed him to keep his farm in his family. He doesn’t really care who gets credit.