Last month, Food & Water Watch released the Pennsylvania Department of Health’s log of health complaints from communities living near fracking sites. The logs include many of the health complaints that critiques have linked to fracking for years – and the state’s inadequate response.

People reported respiratory problems, hair loss, and headaches, and they attributed their symptoms to foul-smelling air and water.

Food & Water Watch obtained the health log through a public records request, following a news report that Department of Health officials are forbidden to talk about fracking with concerned residents. The log includes 87 reports received between March 30, 2011 and April 6, 2015. Many reports show multiple people were affected, sometimes entire families or clusters of patients. 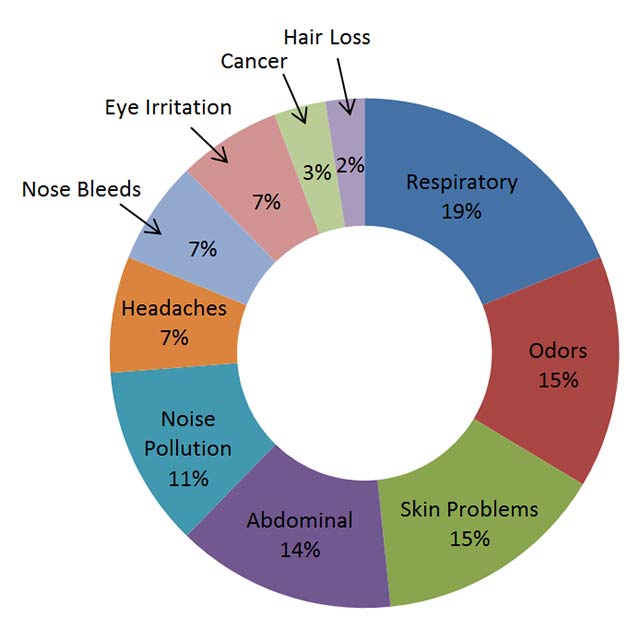 The most commonly reported health symptoms were respiratory issues, skin irritation, and abdominal issues. According to a 2011 study, over 75 percent of chemicals used in fracking cause these same symptoms. It is possible that contaminated drinking water and polluted air caused these residents’ health issues, but to be sure, state officials would have to test the air and drinking water sources near fracking sites for traces of fracking chemicals, then use modeling and other tools to document the connections between the drilling methods and residents’ health problems.

Health department employees were told not to talk to residents complaining of fracking-related symptoms.

When residents call the Pennsylvania Department of Health, employees usually talk with them about their concerns and refer them to agency services. But last summer, StateImpact Pennsylvania reported that health department employees were instructed not to talk to residents who reported fracking concerns. Employees were reportedly given a list of “buzzwords,” including “gas” and “fracking,” and were instructed to record the contact information of callers using these words and forward the information to their supervisors.

A retired health department worker said that she had never seen this protocol used for any other health issue. She worried that her supervisors were not following up with these callers, especially after receiving angry calls from residents whose concerns went unanswered.

According to StateImpact, the Department of Health denied this protocol and the existence of a list of “buzzwords.”

While it’s uncertain why the health department might be avoiding these residents, it’s clear that state agencies are ill-equipped to deal with fracking concerns.

A 2012 law created an “impact fee” on Pennsylvania fracking wells that has generated hundreds of millions of dollars in just three years. The funds are given to state agencies and local governments that regulate fracking – but none is shared with the Department of Health.

The Department of Health does not have the capacity to conduct air and water quality tests, so when residents voice concerns about drilling-related contamination, they are often referred to the Pennsylvania Department of Environmental Protection. However, a July 2014 audit suggests that the agency is facing its own resource constraints, as fracking is expanding faster than the agency can keep up with it.

For instance, auditors examined 15 confirmed cases of water impacts from fracking; in only one case did the agency order the drilling company to restore or replace the water supply. The audit also found that the Department of Environmental Protection lags behind in communicating with residents who have reported concerns.

State agencies need more funding to respond to fracking concerns. They also need to communicate with the public in a timely manner and respond to complaints and health concerns regarding environmental pollution, regardless of the industry involved.

Additionally, drilling companies must be required to conduct baseline testing of water supplies and air near fracking sites – and continue to monitor them throughout drilling.

Without proper environmental monitoring – along with disclosure of fracking chemicals – it is impossible to link health symptoms to fracking operations.

After many years of delay, EPA has finally confirmed that fracking contaminates our drinking water; community monitoring shows that it also pollutes the air we breathe. But since industry influence and federal law have limited the ability of federal agencies to comprehensively regulate fracking that occurs on private land, it is up to state agencies to protect the public’s health and to clean up Pennsylvania communities that have had to deal with the toxic outputs of fracking operations.

Amanda Frank is a Policy Analyst working with the Open Government and Regulatory Policy teams at the Center for Effective Government. She focuses on a variety of environmental policy issues, including chemical safety and hydraulic fracturing.