Here is the seventh in our series of their stories and those of their families.

My name is Marie Levin. I am the younger sister of Ronnie Dewberry. Ronnie has been held in the Security Housing Unit at Pelican Bay State Prison since 1990, a circumstance that is truly cruel and unusual punishment. When I heard about the inhumane conditions in the SHU, I broke down crying uncontrollably.

Ronnie lives in a cramped, windowless cell for at least twenty-two and a half hours a day. He is let out of his cell only to exercise alone in a concrete enclosure and to shower three times weekly. He is allowed no phone calls and may only receive one package per year. His food is often cold and rotten. Ronnie has chronic stomach problems, swollen thyroid glands and a severe Vitamin D deficiency. He also suffers from high blood pressure and has at times been denied his medication. He says that being in the SHU feels like psychological torture. It is traumatizing knowing that a loved one is suffering and there is nothing you can do about it. 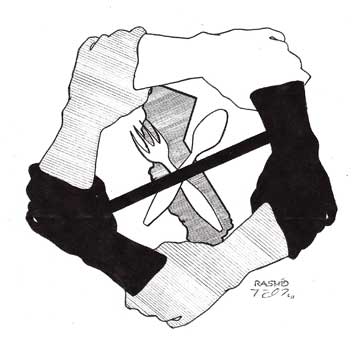 (Image: Kevin “Rashid” Johnson)Ronnie and I are ten months apart in age and we were very close growing up. At first, he was in a prison near our family and I was able to visit him regularly. But since he was transferred to Pelican Bay in 1990, I have seen him only five times. The drive is almost eight hours; I don’t own a car, and travel and lodging are very expensive. There is so much time between visits that, each time, Ronnie looks much older. After the long, costly trip, we are only permitted to visit for one to two hours, through a piece of glass. I have not been able to hug my brother in over two decades. Our mother has had several strokes and is now paralyzed, speaks with difficulty and suffers from dementia. She longs to see her only son, but she is no longer able to make the long and difficult trip. Though Ronnie is eligible for parole, he will not be paroled while he is in the SHU. I fear our mother will pass away before she and Ronnie can see each another again.

In 2001, our oldest sibling, Carol, suffered kidney failure and Ronnie set about trying to donate a kidney to her. He was able to get tested and found out that he was a compatible donor, but the prison would not allow him to make the donation. For years, Ronnie fought for permission to save his sister. Carol died in 2010, in a puddle of blood, bleeding out after a dialysis treatment. She was 59 years old.

I am very grateful for this lawsuit and for all of the support that has been given to Pelican Bay prisoners since the hunger strikes. The movement to end these barbaric conditions has lifted Ronnie’s spirits, as well. For the first time in a very long time, I feel hopeful that Ronnie’s situation might change for the better.

Share
Copyright, Truthout. May not be reprinted without permission.
Marie Levin

Marie Levin is the sister of Ronnie Dewberry. Dewberry is a plaintiff in the Center for Constitutional Rights lawsuit challenging long-term solitary confinement.